Taxes and Your Ideal Competition Weight

What?!? Is there going to be a new tax on weight? Possibly, but that is not what I am thinking. In reading an article in the New York Times, “Slimmer Doesn’t Always Mean Fitter”, which can be found here, I couldn’t help but notice the similarity between a persons ideal athletic competition weight and tax revenue.

It may not seem like a logical connection, but I made the corollary in thinking about the Laffer Curve. The Laffer Curve (named after and popularized by, though not created by economist Arthur Laffer) is a theoretical representation of tax revenue generated in relation to the tax rate. The idea is that at a particular tax rate revenue will be maximized. The connection I made between the two topics was in looking at the Laffer Curve graphically. 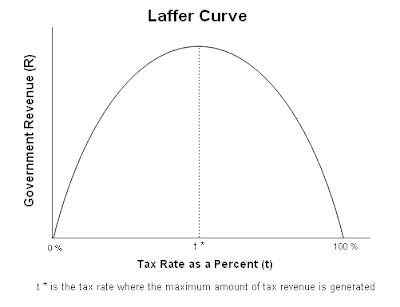 Looking first at the lower and upper boundaries of possible tax rates, a tax rate of zero would quite obviously yield zero tax revenue. Conversely, if the tax rate is 100%, revenue too would be zero as there would be no personal financial incentive to work. The government would be taking all of your earnings. It is somewhere between the tax rates of 0% and 100% where tax revenue would be maximized. Don’t let the nice round shape of the graph fool you as it is a simple graphical representation; don’t think that a 50% tax rate would necessarily yield the highest revenue. This is just a theoretical tool.

Further, if the tax rate is low, the revenue that will be collected will be on a sizable chunk of money, but the tax authority is collecting a small percentage at the low tax rate. As the tax rate is raised there is disincentive for individuals to work as a larger portion of their earnings will go to the tax authority coffers. Fewer people will work so that while the government is taxing at a higher rate, it is taxing a lesser total amount of money. Making the model more complex would invole other factors such as the elasticity of employment, but that is beyond the scope of what I am talking about here. In brief, it asks the question "At what tax rate would you cease working?" 50%? 75%? 90%?
The connection I made is that a competitor, whether a runner, cyclist or other active athlete, has an optimal performance weight, much like there is an optimal tax rate. I put together a graph similar to the Laffer Curve here: 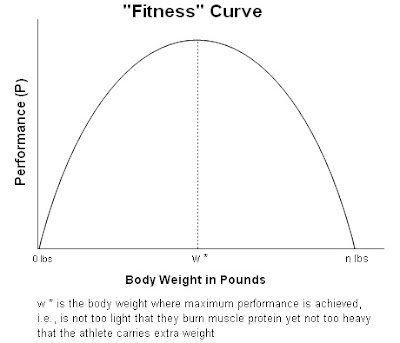 The bounds of this graph are a competitor weighing zero pounds (equally absurd as a zero percent tax rate in a tax collecting environment) and n pounds, n being any large number where the competitor would be considered morbidly obese (akin to a 100% tax rate). If a competitor is over their optimal performance weight, they will carry around that additional weight, slowing them down or requiring a higher level of exertion to maintain the same pace. If however the competitor were underweight, there wouldn’t be sufficient body reserves and the exertion would burn muscle protein to keep going; also sub-optimal.
There are many factors that play in to finding an optimal tax rate or competition weight, though I have to admit I never really thought about the implications of supply-side economics in relation to athletic competition.
Posted by Kevin Knieling at 10:36 AM No comments: