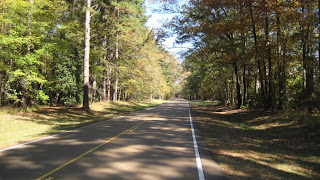 I knew I would have a short day riding, so I opted to wait until after rush hour to start my day. I also made a stop in town to pick up a new voice recorder. I have the worst luck with those things. I had one that went for a swim in New Zealand, another which was left in a hospital in Shanghai, still another that I dropped while riding my bike, but this one just stopped working.

The morning was a little different than any part of yesterday as the Parkway ran along the Ross Barnett Reservoir for a stretch of eight miles. While it was nice to have a change of scenery, it did leave me exposed to the wind. 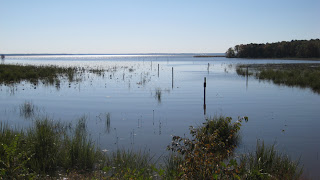 Following the reservoir I was riding alongside a cypress swamp. I stopped and took a stroll along a short walking path. I spied a couple of frogs, a salamander and a turtle. While alligators are a periodic visitor to the swamp I didn’t evidence any.

The biggest disappointment of the day came at mile marker 135. In an instant the surface of the road changed from smooth pavement to chip-seal; which is an under layer embedded with pebbles. It makes for a bone jarring, screw-loosening ride. I generally feel it in my elbows, knees and especially my lower back. I was told by a few southbound riders that the road won’t get any better for quite some time. At least I know it will get better. 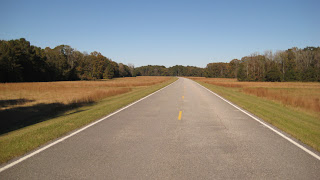 Later in the day I was delighted to see that the leaves are changing color. This is my fourth autumn this year. I caught my first in Vermont, then Arizona/Utah, followed by New York and now in Mississippi. The color is not yet at its peak, but I will be pedaling north to speed up the process.

I was planning on ending the day in the town of Kosciusko, MS, birthplace of Oprah Winfrey. Given my general readership I assume that you could probably care less. In any event, Kosciusko was the last town before Tupelo, 100 miles to the north 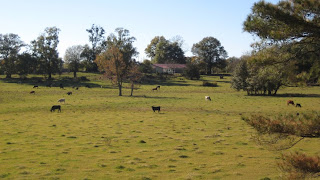 , that has a hotel. Someone in town had mentioned that there was a bed and breakfast another 20 miles up the road, but I was unable to reach anyone there. I would have hated to ride the 20 miles and find that the people were on vacation. Kosciusko it was.

As I checked in I was talking to the person at the desk about my story. As there is nothing in the area surrounding the hotel I was offered a ride into the real part of town so I could pick up a few things, including dinner. How nice was that? Yesterday it was lunch and today this. 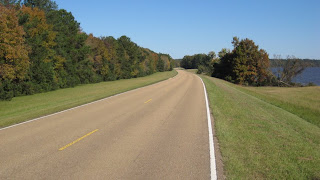 I will have an early start in the AM as I would like to reach Tupelo, MS before rush hour. Apparently city traffic keeps the Parkway packed around Tupelo. And with a narrow road and no shoulder, it isn’t an ideal situation. In addition, a cyclist was killed by car last month as well as another back in April. All the more incentive to ride the 100 miles to Tupelo by early afternoon.
Posted by Kevin Knieling at 6:43 PM