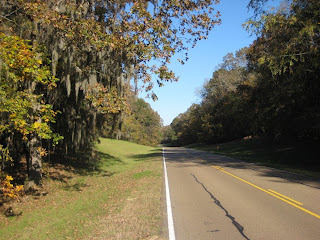 My morning started with the ugly side of Natchez. I rode past a historic site known as “Forks of the Road”. It was the location of the second largest slave market in the United States between 1830 and 1863. Another aspect of the antebellum south that isn’t mentioned in the average tour is that slaves were frequently beaten and raped.

I had a bit of a struggle finding the Natchez Trace Parkway, but once I did I was a happy man. The Parkway takes away the drama of cycling as there is smooth pavement, little traffic and is surrounded by trees that block the wind. Not only that, but there are a smattering of picnic tables on the side of the road, complete with garbage cans and numerous places to obtain water. What more could I possibly ask for? 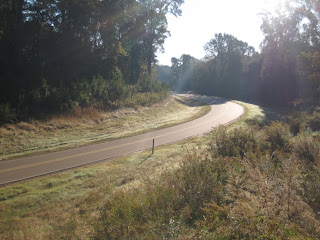 There was no shortage of wildlife as I rode along. While the first two animals I saw were an armadillo and a snake with tire tracks across their back, there was plenty in the way of actually living animals. Early on there was the constant chirping of birds and a trio of whitetail deer. I also spotted some blue heron and the usual squirrels, but the most exciting sighting was a coyote. I saw it on the side of the road in the distance and got my camera out, but then thought “what if it is hungry”. I had a feeling, which proved correct; the coyote would run off as I neared. I never did get that photo. 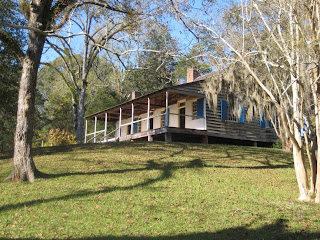 One of the historic stops I made was at Mount Locust, the only remaining “Inn” that was open to travelers of the Natchez Trace. Mount Locust is one of the oldest buildings in Mississippi having been built in 1780. The success of the Inn was due in large part to its location as it sat one days walk from Natchez, the start of the Trace.

In my travels I have met some pretty great people and today was no different. I noticed a half a dozen bikes riding the opposite direction with VBT emblazoned on their bikes. Who knew that Vermont Bike Tours does tours in Mississippi? A little further up the road I pulled in a turnout to take a breather and throw out some trash I had accumulated. Also, there was the SAG wagon for the bike tour. Before I even came to a stop on my bike I was offered all sorts of snacks and Gatorade. The timing was perfect as I was getting a tad hungry. It also saved me a trip off the Parkway to the town of Port Gibson for lunch. 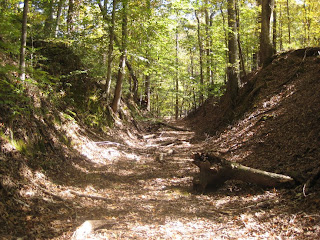 There are certain parts of the Parkway that criss-cross what was the actual Natchez Trace. You can see from the photo how worn the Trace was; to the point of it being sunken below the level of the rest of the area. There were several occasions when I parked the bike and took a bit of a walk on parts of the old Natchez Trace. People always talk about the Appalachian Trail being the first long distance hiking trail but the Natchez Trace has it beat

Traffic picked up the closer I got to Jackson, MS but it wasn’t by any stretch of the imagination heavy. Drivers were extremely courteous. The road was just barely wide enough to pass if there was a bicycle on the side of the road, but just barely; meaning that it would not be safe. There were zero drivers that tried to squeeze through when there was oncoming traffic. Some even used their blinkers to pass and others used the entire other lane when passing. 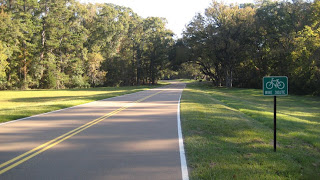 As I got to the north side of Jackson, MS traffic was quite dense. I only had to ride a couple of miles to make my way off the Parkway and find a hotel. On my way into town I realized how hungry I was. I made a pit stop to chug a Gatorade and down some ice cream.

In summary, I don’t ever recall riding over 100 miles in a single day without so much as seeing a traffic light. I have over 15,000 miles on this present bike alone and I think I would struggle to come up with a better contiguous 100 miles to ride. I didn’t have to worry about directions, traffic and could just focus on turning the cranks. It got me back to the pure enjoyment of cycling. I will leave you with a video of my view as I rode the Natchez Trace Parkway and no, I didn't add the bird noises:

Posted by Kevin Knieling at 7:59 PM