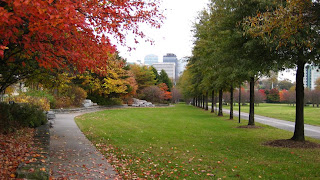 I was taking a day off to see Nashville, TN. While I am generally not fan of taking organized tours I couldn’t argue with how efficient it would be for my single day off in Nashville. They can cram a lot in half a day.

The tour started in Music Row, the area where country artists have a number of recording studios. It used to be the case that the artists would have to go to New York to record until a studio was built in Nashville that allowed recording to happen locally in 1944. One of the studios, Studio B was reputed to have turned out over 1,000 number one songs.

Ryman Theater was next on the list, previous home to the Grand Old Opry. While the Opry has been moved to a newer building, they do still hold concerts at the theater. Had I any interest in country music, I could have seen Vince Gill that evening. 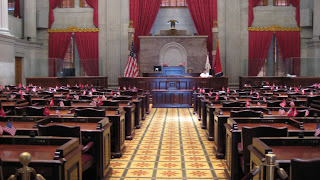 We took a spin past the State Capitol Building, the second oldest capitol building having been continuously in use. It is second only to Maryland. On the north side of the Capitol was Bicentennial State Park had a wall about a half mile long with historical facts of Tennessee carved into it. One of the problems with tours is that I wanted to walk the length of the wall and read about the history. It’s a trade off.

While I like to think I have a broad spectrum of knowledge, when I went in the Country Music Hall of fame I was at a loss. I recognized Elvis, Dolly Parton, Hank Williams, Patsy Clime and a few others, but that still put me around 3% of the inductees.

Last stop was in the downtown area at one of the local bars that had live music in the early afternoon. It wasn’t quite the same scene as the night before as I think all of the occupants were part of a tour.

Following the tour I had a list of some things I wanted to visit. My list was truncated as the art gallery in the Pantheon as well as the Tennessee State Museum were closed on Monday. I made my way back to the Capitol building and was able to set up with a little tour of the building. Afterwards I walked down to Bicentennial State Park where I was able to talk that walk along the history wall. Here are some random facts about Tennessee:
- 1795 Tennessee achieved one of the requirements for Statehood, which was a population of 60,000 ( became a state on June 1, 1796)
- David Crockett was elected to Congress in 1827, killed at the Alamo in 1836
- In 1838 over 4,000 of the 17,000 Cherokee Indians that were forced from their land died on the Trail of Tears (Here is a write up from the kayak trip)
- 1844 James Polk was elected President (He was born in North Carolina, but lived most of his life in Tennessee)
- In 1848, the term “Volunteer” achieved popular usage in referring to Tennesseans following a call for 2,800 troops in the Mexican War. 30,000 Tennesseans responded.
- (I like this one) In1929 the Memphis Merchants Clearing Association began flashing commodities quotations on cottonseed and cottonseed meal around the world


I spent the evening planning around Hurricane Ida. It seemed that while the storm had been downgraded, it was still going to bring rain to the area. I have spent my fair share of time riding in rain, but I don’t really want to do it if I don’t have to. I thought about taking another day off renting a car and driving to Memphis to visit my friend Jim, or even heading to Lynchburg, TN to visit the Jack Daniels distillery, but I have to keep pedaling as a new commitment came up. I pedal on. 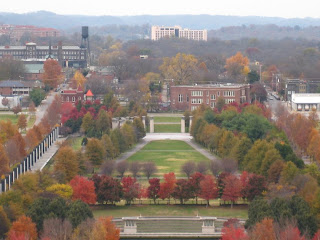 While keeping my eye on the weather it also came to my attention that it was the 20 year anniversary of the fall of the Berlin Wall. I can hardly believe that it has been that long. I was living in Germany at the time and it was something extraordinary being there at that time. It’s not everyday that such a significant change in government takes place.
Posted by Kevin Knieling at 8:26 PM