End of the Natchez Trace 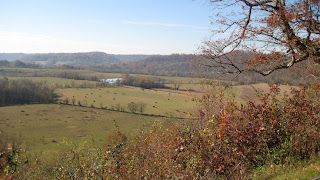 From the town of Hohenwald I had two options as to how I could get back on the Natchez Trace Parkway. I could cut diagonally back to the Parkway or go back the way I came. Were I to cut north I would miss about 8 miles of the parkway and I didn’t want to do that, so I went back the way I came. I also knew that the road was in good shape going that way.

I wouldn’t have really missed much on the Parkway had I taken the shortcut other than one long descent, a long climb and a large area of lawn that a couple of hillbillies tore up doing donuts in their truck. 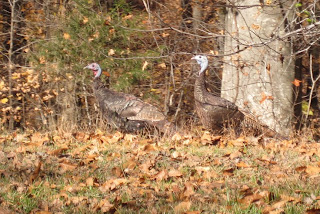 One notable crossing in the morning was that of the Tennessee Valley Divide. All the water that falls to the south flows to the Duck or Tennessee Rivers and all that on the north into the Cumberland River.

The last 60 miles of the Parkway went past quickly. As it was a beautiful Sunday it seemed as if half of Nashville was out on the Parkway. There were bicycles, motorcycles, people driving convertibles, antique cars and all manner of other conveyances. 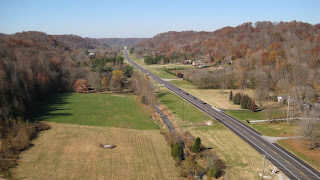 The northern section of the road wound around quite a bit more than it had further south. Between the number of people using the parkway and the road winding as much as it did made things more difficult for everyone involved. I found myself directing traffic more than I would have liked. I would periodically ride in the middle of the lane so that cars wouldn’t pass from behind when not safe to do so. I don’t like doing it, but it is for my safety.

From the end of the Natchez Trace Parkway it was another 20 miles to downtown Nashville. The road was in great shape and while the shoulder wasn’t very wide, the route is heavily traveled by cyclists leaving drivers aware of bike traffic. 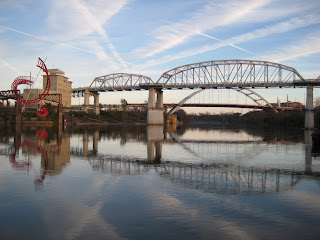 When I approached Nashville from the southwest I took a detour through Centennial Park. In the park there is a full size replica of the Parthenon in Greece. My biggest decision was deciding in which part of Nashville I wanted to stay. In the end I figured out that the downtown area was the best bet.

Once I set up with a hotel I went for my own bike tour of downtown Nashville and I’m glad I did. Even on a Sunday evening downtown was vibrant. Not only were there several places that had live music, but every other street corner seemed to have someone playing the guitar, banjo, the spoons or at the very least panhandling. Memphis has Beale Street, Nashville has Broadway. 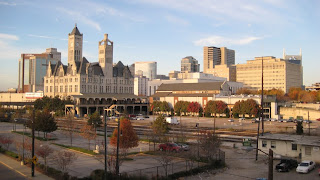 I dropped my bike off at the hotel, got cleaned up and made my way back downtown for some Tennessee Barbeque and live music. While I am by no stretch of the imagination a fan of country music, I found a happy medium ground: bluegrass. Much like Pioneer Days yesterday, I ended up staying far longer than intended but the music was toe tapping good.
Posted by Kevin Knieling at 7:32 PM