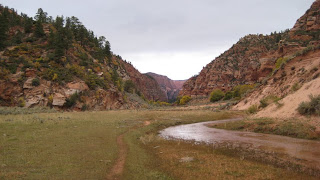 We had descended into Hop Valley and had to follow it along until we caught a connecting trail taking us back up and out to a plateau. While in theory it sounds simple, it didn’t work exactly as planned, as least not right away.

Following my efforts to stay hydrated in the morning I told Laura I was going to step off the trail to answer the call of nature and she should go ahead. I soon walked on, trailing Laura or so I thought. I thought it a bit odd after not seeing her for a half an hour, but figured she was just making good time and would wait for me as she saw fit. While I had thoughts the she may have taken a wrong turn, it wasn’t until 15 minutes later that I was suspect. There was a set of footprints on the trail that looked as if they came from her, but I couldn’t be certain. I called her name and heard no response…repeatedly. I continued on, thinking that perhaps she couldn’t hear me over the wind. I had no reason to think she was anywhere other than on the trail ahead of me.

It wasn’t until I reached a cow fence that I had serious doubts that she was in front of me. I figured at the very least she would probably wait for me there. While it was what I thought, I was not 100% certain. There was a road crossing another one and half miles further up the trail and I knew she wouldn’t go beyond that. I needed that 100% certainty so I knew where to focus my search for her, namely behind me. I hung my pack visibly on the fence hoping no chipmunks or a cow would tuck into it and I ran. I ran to the road without any sign of her and quickly ran back. On my way back I was really hoping she would be standing at the fence right next to my backpack; no such luck. 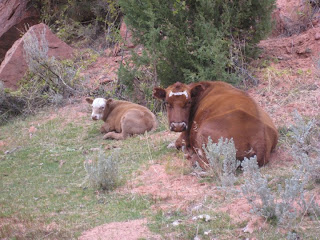 As I was loaded up with water, I dropped a few water bottles so that I could pick up my pace and keep what was in my pack in the event I would need it. I began backtracking from whence I came and was going to keep going until I got to the point I last saw her. Fortunately, I didn’t have to go quite that far as Laura materialized on the trail a mile back. She ended up following a cow path off the main trail and then forked out from there, which is when I had passed her. The ending to this could have been much worse, but we took it as a learning experience, providing us with the opportunity to set backcountry rules and discuss what to do in the event we become separated. Also not the worst thing in the world was that we hadn’t yet covered three trail miles and it was noon.

We continued together along the valley floor, having on at least a half dozen occasions to cross La Verkin creek. The creek wasn’t terribly deep, so it was a non event really. The worst part was getting the stink eye from the cows as we walked past. 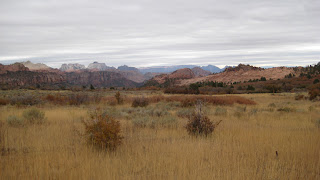 When again reaching the cow fence I collected the water I left behind. I had noticed earlier that a cow had been out, but at the time I had other things on my mind than getting her back in her valley-wide pen. Laura and I tried in vain to sheppard the cow back through the small gate, but the cow was having none of it. The cow was on its own.

By the time we reached the road crossing we paused for a bit of lunch to collect ourselves. It was still overcast though the outlook was more promising than the day.

The afternoon took us up and down through varying terrain. At one point when we stopped and looked up, a Condor was circling high above on the thermals. At the North Rim of the Grand Canyon we caught a talk about the recovery of the Condor. Numbers were as low as 22 in the 1980’s. At present there are around 325, with just more of half of those in the wild.

Later in the day we inadvertently followed another animal path off the main trail. At least we were together. There were numerous animal trails that intersected in the area and finding the actual trail involved climbing to a perch and evaluating the terrain as compared to that of our topographic map. I could tell generally where the trail should be, so we headed off in that direction. It turned out that the trail was not as well worn as several of the animal trails in the area. 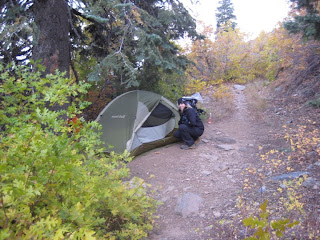 The trail climbed to 7,000 feet in elevation, leaving us with an expansive view of Wildcat Canyon, where we would hike the following day. Despite our mishaps we made our initial destination of Wildcat Spring before dark. There was little in the way of level ground as we were walking the edge of a canyon, but there was a spot that had obviously been cleared to camp. It wasn’t perfect, but it would be home for the night. In the time we sat, prepared and ate dinner, a collection of stars began poking their way out from behind the clouds. The disappearance of the clouds would leave us with a cold, calm night.
Posted by Kevin Knieling at 1:50 PM