I See the Light!

I learned a hard lesson on my Los Angeles to New York bike ride: it gets dark at night! While it doesn’t take Einstein to figure that one out, I just didn’t think I would be riding in the dark. In 2005 when I rode cross-country in the opposite direction it was the end of summer which gave me plenty of daylight until 8 o’clock or later depending on the time-zone. While it seems quite obvious, I didn’t really think that I would begin losing daylight at 4 PM.

On one evening ride in Arizona, with a light snow falling nonetheless, a police officer pulled me over and told me to get off the road. I didn’t have any lights on my bike and I was a hazard to both myself and drivers as well. It wasn’t until two states further on, in Houston to be exact, that I finally broke down and bought a rear light so I could at least be seen from behind. 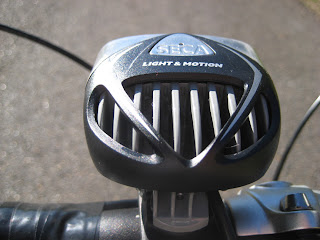 I am still here to tell the tale so I got lucky, really lucky in fact. I am now older, wiser and have since learned about a company by the name of “Light and Motion”. Light and Motion makes bike lights. Not just any bike lights mind you, but cars flashing their headlights at you, planes mistaking you for the landing strip, you’d think its daytime kind of bike lights.

A saying regarding bike lights is that “you don’t want to outride your light”. “Outride your light?!?!?” Well no, I don’t have the requisite number of gears on my bike to travel 670,616,629 miles per hour, the speed of light, but the problem is that most lights just don’t shine far enough ahead to give sufficient reaction time. 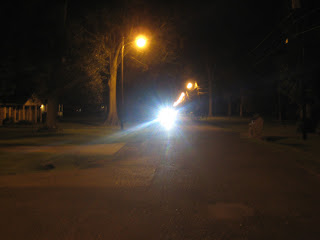 I am using the Seca 400, tested at 425 lumens. The first time I turned it on I just giggled at how bright it was. And that isn’t even the top model; the Seca 900 , as its name suggests, a full 900 lumens. Life on other plants could probably see that thing. Look how bright my light is compared to the street light!

Riding in the suburbs with a smattering of street lights, even on the low setting, the 400 does a fantastic job of nullifying shadows. The light really shines though (pun intended) in total darkness. The light opens up a swath of illumination reaching far enough ahead to give me plenty of reaction time even at speeds approaching 30 MPH. Now I just need an illuminated computer.

As you can probably tell, I am pretty excited about my new light. I’ll post more after I have had a chance to really put the light though its paces…
Posted by Kevin Knieling at 8:15 PM