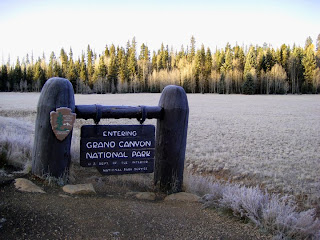 The morning entering the Grand Canyon was worthy of all my warm gear, including a hat and gloves. I knew it would quickly warm as Laura and I descended, but there was no sense in being chilly for the first half hour. We would descend from the North Rim of the Grand Canyon on the North Kaibab Trail, which is a major hiking and mule highway. While we did beat the mule traffic out of the gate, there were dozens of other hikers on their way down.

The descent was fairly straightforward as it was a well maintained path and used by mules nonetheless. There was a good bit of camaraderie in speaking to other hikers in passing, but the numbers thinned out past the six mile mark, Cottonwood Camp. Cottonwood Camp is where a majority of people stay on their first night down in to the Canyon. Laura and I opted to open with a 14 mile day, which would leave us near the very bottom of the canyon as our time was limited due to the permit process. We were just happy to be able to obtain a last minute permit allowing us to spend four days in the canyon. 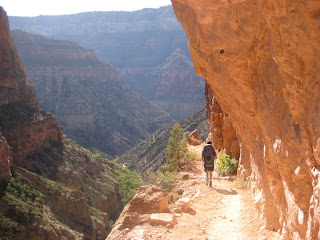 As we hiked further down through the layers of Coconino Sandstone, Hermit Shale, Redwall Limestone and Bright Angel Shale, the marvel of the Grand Canyon really took hold. Thinking about how the layer upon layer formed over billions of years and was then eroded away by the Colorado River was nearly unthinkable.

Upon reaching the bottom of the Canyon, Laura and I passed through Phantom Ranch enroute to our campsite. Little did we know there was a lodge at Phantom Ranch that had a fully stocked canteen. After what became a hot and sweaty hike we were delighted to be able to have cold drink at the canteen. 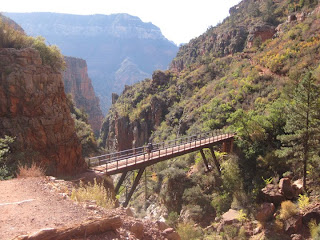 We stuck around for a ranger led talk on the Civilian Conservation Corp (CCC), a group formed by Franklin Roosevelt as part of the New Deal during the Great Depression. Given the similarity of that time in history to the present, I couldn’t help but think about how different the approach has been in providing for people during the times. The CCC was "for the relief of unemployment through performance of useful public works and other purposes”. As part of the CCC workers training, they were able to learn skills in their free time whether it was playing the guitar, speaking French, or Accounting. It provided potentially marketable skills. It sounds more palatable to me than the free handouts that have been happening as of recent. I consider myself a mostly Free-Market Economist and believe that things should unfold as they will without interference and yes, this includes Wall Street. But this isn’t about Government. 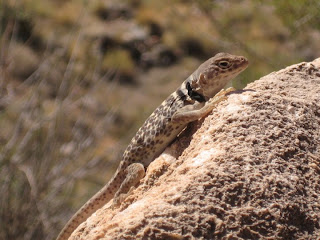 Our camping area was a half mile further down the trail and shared with up to 30 other groups. Camping in a congested area was not exactly what we were looking for in the Grand Canyon experience, though I must say, the park does a fantastic job of cordoning off the campsites. It was quiet and while having dinner near the tent, I would never have guessed there were so many other campers nearby.

Packing in that many campers to a particular area does have an effect on wildlife, notably that it will come looking for food. As I was looking up at the night sky, a Ringtail Cat came poking through camp and made a move for the empty pots that were cleaned and drying on a rock nearby.

Laura and I spent an hour looking up at the night sky, talking, before turning in.
Posted by Kevin Knieling at 6:28 AM