Camping on the Colorado 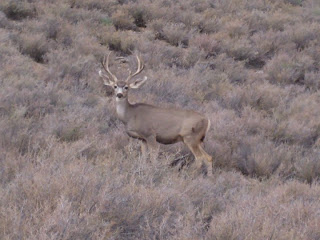 Right off the bat in the morning Laura and I were greeted by a Mule Deer nearly immediately after setting out for our hike. Not long thereafter we also found a pair of deer antlers that had been shed and were bleached white by the beating sun. While the deer were the only large animals we had encountered, there are numerous coyotes and mountain lion that reside in the park. Also, constantly scurrying underfoot were small lizards. The lizards would dart out and then under shelter as we walked past.

As soon as we were out of the shade of the canyon walls the day warmed quickly. There was no respite from the sun whatsoever. I couldn’t imagine hiking down in the Canyon in July or August. It must be brutally hot.

As we hiked, the landscape took on a yellowish hue. It was mostly due to the area of Tapeats Sandstone that we were hiking through. One of the remarkable things about the Grand Canyon is that the striations in the rock are so plainly visible. There are about a dozen distinct layers visible in the canyon, all added throughout time. While now a plateau, there was a point where the entire area was a shallow sea.

It is not only the color of the rock that is an indicator of layering, but also the way the rock erodes. Softer layers of rock crumble in smaller pieces and as such leave rubble piles that are angular. The harder layers of rock, which generally had the softer rock underneath erode, will sheer off leaving an almost vertical section. Having these numerous layers is what to me gives the Grand Canyon much of its visual appeal. 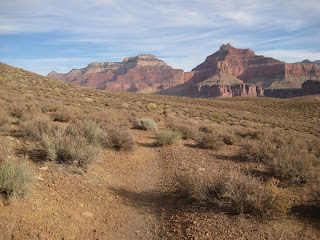 While we did pass a small group of hikers, the area was secluded. It was the Grand Canyon we hoped to experience. And for a good part of the day we would be able to catch the periodic glance of the Colorado River down below. It would be our destination for the evening.

When we initially made the effort to secure our camping permit we hoped to stay at Monument Creek. It was mostly for logistical reasons, so that when we were to hike back out and up the Canyon, our day would be several miles shorter than if we camped down on the Colorado River. Once we saw the Monument Creek area we were elated that there were no further permits being issued, pushing us down to Granite Rapids on the Colorado River itself. While Monument Creek was geologically interesting, the area was little more than a few low trees in a dust bowl. It had none of the charm of our campsite the night before. 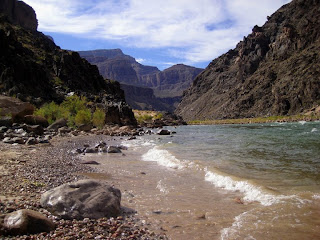 Leading down to the river from Monument Creek was a primitive trail at best. The trail itself was a presently dry riverbed between two canyon walls. The trail was basically anyplace in the 100 yard span between the canyon walls. There would be no getting lost as there were only two directions on this trail: up or down.

There was no actual camping area down by the river, but rather anyplace we could find a level section of sand to pitch our tent. The area was interspersed with tall rock spires and low growing cactus. We got the tent set up and had plenty of time to goof off near the river. As Granite Rapids was rumored to be one of the worst rapids on this stretch of the Colorado, I didn’t have any need to step into the river past my knees. Not only that, but the water was far colder than I would have imagined. 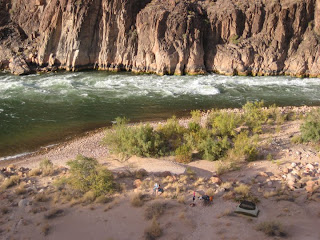 Once the chores around camp were complete I went about climbing on the myriad of rock spires (from which I was able to take this aerial photos of our camp) while Laura practiced Yoga on a white blanket of sand. While we hoped to have this campsite to ourselves, it wasn’t long before a white water rafting group pulled up and set up camp not far from us. The guide came over and apologized for interrupting our peaceful afternoon and offered to "buy" us a beer after his group had dinner. Rafters can carry far more weight than hikers.

Though we didn’t have the place to ourselves, it was an enjoyable location to spend the night. This was in spite of Laura’s cursed backpack falling into cactus patch (and me spending an hour picking out cactus needles) and having to take the food bag in the tent with us. We never did take up our friend on his post dinner offer; rather we gazed up at the stars and fell asleep to the sound of the Colorado rushing between the canyon walls, as it had been doing since it cut a swath beginning six million years ago.
Posted by Kevin Knieling at 8:58 AM