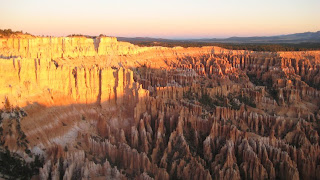 We awoke well before sun up in an effort to catch the sunrise in Bryce Canyon. While there are numerous locations to watch the sun poke over the horizon, some are naturally more pleasing than others. We opted for Bryce Point, which we shared with a number of bundled up, serious photographers as well as a bus of Japanese tourists. The morning was crisp.

Watching the show of light play out as the sun crept higher in the sky, casting shadows on the tall spires of rock, known as hoodoos, was an exercise in patience 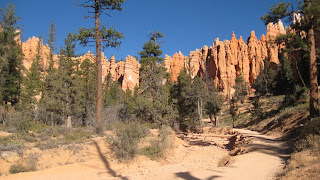 . Various people decided they had enough before the sun even cracked the horizon. Perhaps it was the cold, but it only made it quieter for the people that stuck it out.

Laura and I hung around until well after sunrise, only then opting to walk down the canyon among the giants. Laura put together a six-mile loop for us to walk and take in some of the more scenic sections of the northern part of the park. Not having to carry a big backpack made the walk seem almost unfair as we bobbed along the trail. 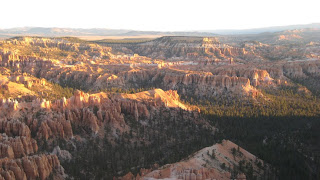 There was a fair crowd in the same section of the park, though it didn’t seem it. We did occasionally happen upon some other people and stop for a chat. It seems that this was the most walking that most people were doing on their vacation.

We stayed in the Canyon long enough to have a bit of lunch, but shortly thereafter made our way back up and out. We stopped at the visitors center on our drive out of the park to learn more about the area. The vicinity saw its firs people, the Anasazi, over 2,000 years ag 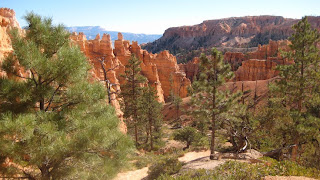 o, presumably brought to the area to hunt rabbits and collect pine nuts. As far as modern settlers, there was Ebenezer Bryce, a Mormon, after which the Canyon was named, who homesteaded in the area.

While our time in the park seemed short, I guess it is about as much time as people generally spend there. Our afternoon involved nothing more than a drive to Salt Lake City, UT and the end of our vacation.
Posted by Kevin Knieling at 3:54 PM