Away From the Masses 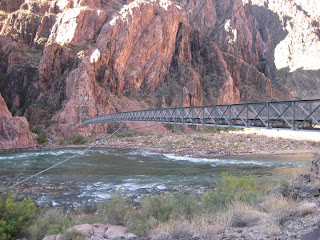 The morning leaving camp once again put Laura and I on a main trail, but only for the a few hours. While we got a late start, we didn’t have nearly the mileage to cover as the day previous. Our first order of business was crossing over to the south side of the Colorado River via a cable bridge. We wouldn’t get to feel the water of the Colorado until later in the day as after crossing the cable bridge the trail ascended away from the rushing waters. Once the trail slowly wound its way down, we paused for our first real experience with the Colorado River, creator of the canyon through which we hiked. We left our backpacks near the trail and made our way down to feel the cold water of the river. We took our time enjoying the view and had a chat with someone that was on a white water rafting trip. It was an all too pleasant interlude in our morning. The only down side was that when we turned back to our packs, a squirrel had chewed a hole through Laura’s new pack and claimed a snack of dried fruit for its effort. 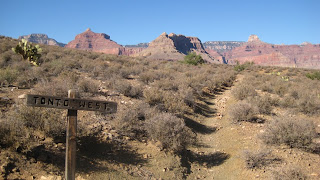 We paused at and an area called Indian Garden for lunch, the last of the major stops on the trail which we would be hiking. It was a shady oasis complete with picnic table and clean water. As we left Indian Garden we had the option of taking a side trail to a lookout. As we were making good time we opted to take a scenic detour before heading down the Tonto Trail and away from the majority of people in the Canyon. The detour took us to Plateau Point, a vista with an abrupt drop to the Colorado River several thousand feet below. The side trip added a couple of miles to our day, but the lookout was entirely worth it. We lingered for nearly an hour before backtracking and turning off on the Tonto Trail. This area of the canyon receives significantly less use than where we had been and we also knew that where we would be camping for the night would leave us entirely by ourselves, having scooped up the single permit issued for the camp area. This made up for the fact that there was no water in the vicinity, leaving us to carry all we would need until the following evening from Indian Garden. 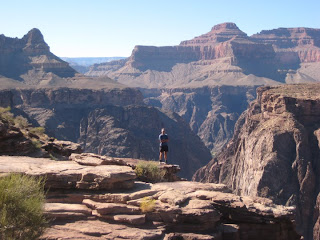 We had just enough time to set up camp, do a little exploring in the area and eat dinner before the sun ducked behind the canyon wall. Shortly after the sun made an exit, Jupiter as well as thousands of stars filled the sky in place of the sun. With so little light pollution in the area the display was one of the best I had seen since Waitomo, New Zealand. Laura and I laid down on a rock and stared upwards, pointing out the odd satellite to one another as it pushed across the sky, or yelling "Shooting Star!" as one of us would spot such an occurrence as it too blazed a path in the night. Shooting stars incidentally, are not stars at all, rather meteoroids that enter and burn up in the earth’s atmosphere. It made our night no less enjoyable spotting one though. 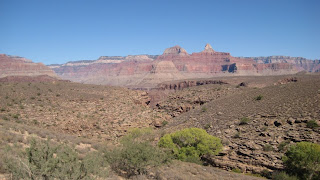 I am predominantly an East Coast hiker and with that, am used to hanging my food in a tree at night in an effort to thwart bears and mice. I had spoken to a ranger who claimed that he always sleeps with his food in his tent. The concept felt odd to me, so I made a mouse baffle out of my cooking windscreen and hung our food bag in the lone tree tall enough to keep the food bag far enough off the ground. After getting in the tent and settling down for the night the rodent activity began. I noted a couple of mice and even a desert rat clambering (and clamoring for that matter) around in the tree. They would soon make their way further into the night, leaving us in peace.
Posted by Kevin Knieling at 6:49 AM