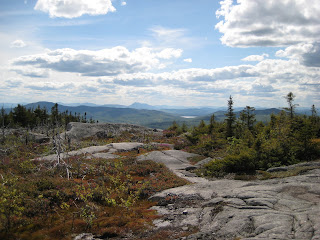 In the past two days I worked a little overtime and managed 70 miles of hiking. I had a few goals set out for myself and in knocking off those miles in two days I accomplished one, having a day off in Monson, ME and set myself up to hit the mark on two others.

The weather has made a 180 and has just been fantastic the past two days. The next few days are looking pretty good as well with no complaints on my end. As I mentioned once before, the upside of the rain is that it tempers the black flies and mosquitos, but I will take bugs over rain any day. Someone had asked me how the bugs have been the last couple of days and I could only say "numerous and persistant". It doesn't help that I am walking through boreal bogs for a good part of the day. 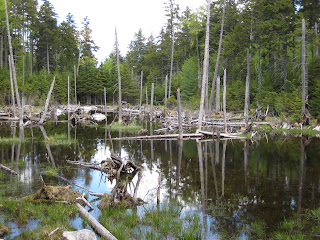 I was hoping to pick up a replacement section for my broken hiking pole in Caratunk, ME, but my support staff dropped the ball on shipping. My support staff has been fantastic throughout my travels with so many things that I couldn't possibly criticize one oversight. I also sent a small food parcel to be picked up at the same post office, but wasn't going to need it until I hit the next town, 35 miles away. Instead of taking delivery of the package I had it forwarded to Monson, ME where I was going to meet my package and take that hard earned day off. The woman at the Post Office joked with me that if I was going to walk the 35 miles to Monson in one day, I would beat the US Postal Service Priority shipping and be in town before my package. I did and I was. 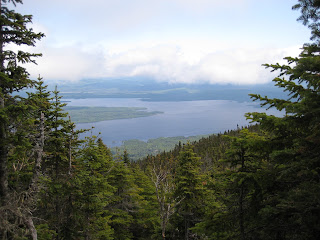 One thing that has become prevalent in Maine is having to ford rivers. Most of the rivers aren't raging, though I have heard people say that they are impassible at times after a heavy rain. To this point none have been more than waist deep and have been relatively gentle. It is somewhat time consuming preparing for the ford, having to put away electronics and the like. I have also generally been fording in bare feet which is a no-no. The rocks are awfully slick and one slip can mean a broken ankle. As an avid fly fisherman I like to think I have the proper experience for judging when I can cross a river sans shoes. That being said, once while fishing in New Zealand I was swept down river after my foot lost its purchase on a rock underwater. It is a rather helpless feeling being washed away and one that I would not like to repeat.

There is one river that has to be crossed in Maine, the Kennebec, where it really isn't ever safe to ford. At least one hiker has died trying and several other have had close calls. That being the case the Appalachian Trail Club mans a canoe to ferry hikers from one side of the river to the other. It's the official crossing of the Appalachian Trail. 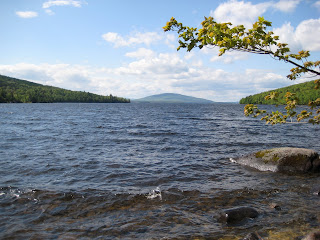 So I find myself in the town of Monson, ME with a day off. I certainly needed to resupply as I am approaching the 100-mile wilderness, but I wanted the day off for another reason. Shortly after starting to hike the trail in Georgia I took a day off to do a bit of kayaking. Shortly before ending my hike I wanted to do the same. So I paddled around Lake Hebron for a few hours to scratch the kayaking itch.

Much as Spanish Moss is neither Spanish nor Moss, the 100-Mile Wilderness is not 100 miles nor is it wild; at least not as wild as it used to be. For those of you that have read Bill Bryson's book "A Walk In the Woods", relating to his hike of parts of the Appalachian Trail, technology has changed things somewhat since the time of the books writing. There are now also logging roads that cross the trail and cell phone service is available from the tops of certain mountains. Add the two together and you can have someone drive supplies in should you need them. I'm pretty sure that Dominos wouldn't bounce down 25 miles of rutted dirt road to deliver a large with pepperoni, but the area isn't as remote as it once was. There is also a hunting camp a few miles off the trail where I hope to spend one night.

After my run to the town of Dexter, ME, home to the shoe company of the same name, I am fully supplied with food for what I hope will be the last five days of the trail. I once again found myself behind the steering wheel of another persons car to make the run and probably bought more than I should have. This will be the most food I have carried at any point on the trail. 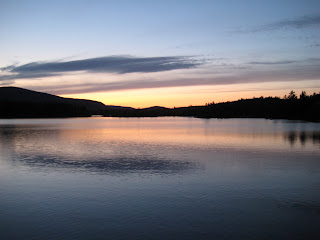 And while the replacement hiking pole section mailed to me is still somewhere in limbo, there was an outdoor store in the town of Greenville, ME that had exactly what I needed. For a well spent 20 bucks I am all set with my hiking poles and no longer have to use a stick as a poor mans substitute to an aircraft-grade aluminum hiking pole.