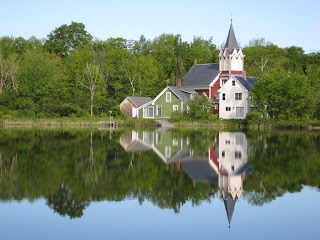 The town of Monson, ME was the last I would encounter until after Mount Katahdin, which meant it would be the last before completing my hiking journey. My uncanny luck of finding a way to where I need to go paid off again as when I was on the edge of town a gentleman offered me a ride three miles down a dirt road back to the trailhead where I came into civilization two days prior. As it turned out, “Buddy” was a local chap that ran a business driving shuttles into the 100-Mile Wilderness for hikers using logging roads. Any reservations I had of having to hike through an area named the 100-Mile Wilderness were quelled when Buddy mentioned that in the past he has made pizza and beer deliveries to hikers. He gave me his number and while I hoped I wouldn’t need it, it was good to have an out should I encounter any problems. 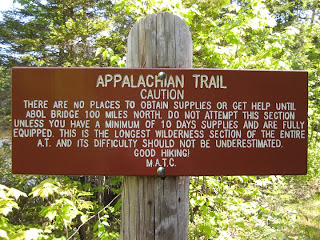 When leaving town I had far too much food, or at least that was what the weight of my backpack was telling me. My backpack felt legitimately heavy, or at least the heaviest I ever remember it being. It didn’t take long though for me to get used to the heft on my back. I was also taking it easy so as to really drink in my remaining days on the trail. At one point I found myself sitting next to a pond, nibbling on some of my excess food.

The terrain had initially become more rolling than it had been to the south of Monson, ME, but it helped that the weather was absolutely perfect; in the mid-60’s and only enough in the way of clouds to make photos that included the sky look interesting. In addition to the hills there was also a series of four or five mountains I would have to cross on my way north, but by and large the terrain was much simpler than in New Hampshire. While Maine claims to have a wilder section of the trail than other states, it seemed that there were steps up and down the mountainous sections. As I wandered along I met a trail crew working to build yet more in the way of steps. I stopped to have a bit of a chinwag with the half-dozen trail workers and as I was speaking, one member of the group recognized me from a barbecue at Hog Pen Gap, GA when I was on the trail the year prior. Of all the places to be recognized, I didn’t think it would happen while on the Appalachian Trail. 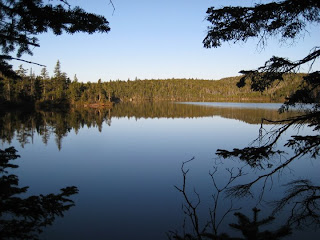 I saw far more in the way of people than I thought I would in the 100-Mile Wilderness. I began to regularly see hikers on the trail, all of them heading south. I crossed paths with upwards of 20 people on one particular day, more than I had seen on the trial combined since leaving from Great Barrington, MA a month ago. When I crossed one of the logging roads there was a group of four guys that had driven in and were fishing and drinking beer…or drinking beer and fishing. I’m uncertain as to what their primary activity was, but in any event I had a pleasant conversation about the area and declined the offer of a refreshing beverage. Further on I met another pair at a different logging road that was doing a governmental study of the ponds in the area, comparing those with fish populations to those without. Tax dollars at work. 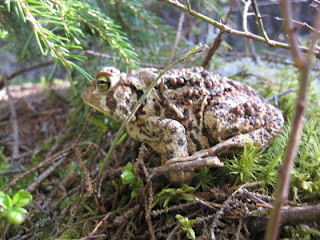 Since my snowy interlude in the mountains the weather had warmed nicely, especially in the evenings. There was one particular evening though where it was just too warm. The mosquitos were out en masse and the only way to keep them at bay while trying to sleep was to wear my head net and cinch up my sleeping bag around my head. While it was an effective deterrent for mosquitos it had the secondary effect of functioning as a sauna. I simply sweat to the point where my sleeping bag was soaked and opted to unzip and feed the mosquitos. The following day saw me hiking in 65 degree temperatures wearing my wind pants, fleece shirt, head net and gloves so as to avoid adding to the mosquito bite collection that grew markedly overnight. Much like the night previous I just had to cool off, so I removed all ancillary clothing and again made a meal of myself. 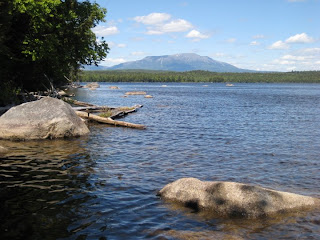 I was elated on the afternoon I reached Whitehouse Landing, or rather the lake shore across from it. Whitehouse Landing was the lodge where I had planned on spending a night and dining on “people” food. The only way for a hiker to get to the lodge is by boat, so the owners leave an air horn attached to a tree for hikers to use as a signal. I gave a honk and got a pick up. I was excited for several things at Whitehouse Landing: food, kayaking and a place to sleep absent of biting insects; precisely in that order on a time basis. I started with a pint of ice cream and then couldn’t decide between the one pound hamburger and a 16” pizza, so I just went ahead and ordered both. To burn off dinner, as if I wouldn’t the following day hiking, I took a kayak out for a paddle at dusk. I was told that there was a marsh area around a bend in the lake where moose liked to feed in the evenings, but nary a moose did I see. I was however attacked by black flies. I was just pleased that I didn’t have to contend with them as I dozed peacefully throughout the night.
Posted by Kevin Knieling at 6:44 AM