The Rain Has Ended... 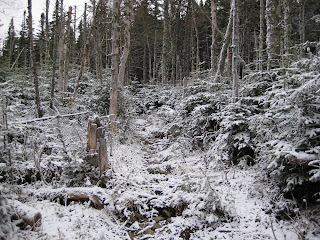 …and the snow has begun. Perhaps I should have been more specific when I was hoping that the rain would cease; no precipitation whatsoever. Following the rain the evening prior the wind picked up significantly and it had become decidedly colder. I didn’t realize just how chilly it was until one of the several times I was woken by the wind blowing down a tree or large branch, as I would evidence on the trail the following morning. As I sat up to evaluate what was happening given the noise I heard I looked out of the lean-to and noticed the ground was white. I really didn’t expect to have snow to ring in the month of June. 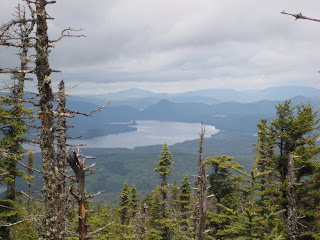 While I made the switch to my summer sleeping bag back in Gorham, NH, my bag hung tough. I can’t claim to have had a warm nights sleep, but for the temperature range the bag was designed I was as warm as I could possibly expect with the mercury hovering around 25 Fahrenheit. One word of advice to all you future hikers out there: spend as much as you can afford on a good sleeping bag. If you are buying it from someplace that ends in “mart”, reevaluate your decision.

Getting out of the sleeping bag in the morning was an effort. Before doing so, I made a mental checklist of the things I had to do and in what order, until I would be on the trail, hiking along generating body heat. My boots were frozen, my rain jacket was frozen, the knot holding my bear-bag in a tree was frozen, my water bottles were frozen and I was, well, rather chilly. From the time I unzipped my sleeping bag to the time I was hiking was less than five minutes. It was one of those rare times I was glad my day began with a 1,000-foot climb. 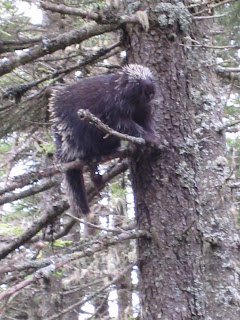 My biggest concern was my feet, not least of which that I was starting the day with my boots frozen solid, laces and all. It would be very important for me to keep my feet dry. The snow made reading the trail quite difficult, not only in staying on the trail following the white marks emblazoned on trees, but if the trail was solid ground or a sheet of ice with six inches of water hiding underneath waiting for me to plant my foot in the wrong spot. For the most part though, the freeze firmed up the trail.

What I was looking least forward to was having to ford a river early in the day. It would have been an unpleasant task, but fortunately I was able to make my way across the river using a board someone left chained to a tree. While in Nepal I once had to swim across a river of glacial runoff from Mount Everest and it was an experience I hope to never have to duplicate. It gave me a new basis for the word “cold”. 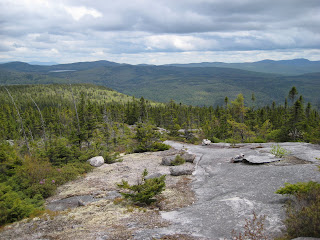 While I didn’t have to ford any rivers along the southern part of the trail, Maine likes to think it is more rugged, so there are no bridges over certain rivers. In truth that is only partly the case. It is also because of the extreme weather that bridges get destroyed over winter. In one of the shelters there was a notebook left by a gentleman who takes care of the trail and was involved in setting out the Appalachian Trail in the area back in the day. In the book were answers to many questions that people have asked over the years, lack of bridges being one of them. There have been bridges built, in some cases ten feet over flood stage that have still been destroyed after winter storms. I got a kick out of the picture of a shelter being dug out of a January snow where the caretaker had to dig down three feet…to find the roof!!! He mentions that 15 feet of snow isn’t uncommon in the winter and that several years ago in mid-June there was still four feet of snow on many parts of the trail in Maine. 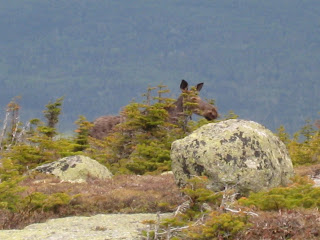 If the weather hasn’t been enough I have also had a mishap with my hiking poles, i.e., breaking one of them in half. When it happened it was a good thing I had my elbow and that slab of granite to break my fall. While I resisted hiking poles for years, I finally learned how they make things much easier on my knees. With the absence of one of my poles not only did it feel awkward, but my knees were taking a larger portion of the strain. Having already had one knee surgery, I would really like to avoid another. In that the hiking poles are in three sections all I needed was one replacement section. It was fortunate that 1) I had a spare section in storage, 2) I knew exactly where it was, 3) I had cell phone service, 4) my support staff is awesome, and 5) the post office was open. Within an hour of breaking my pole, the replacement section was in the mail on its way to meet me a few days up the trail in Caratunk, ME. 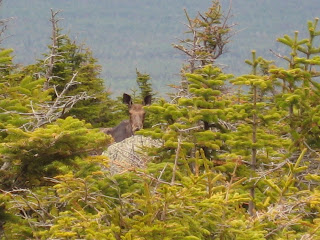 The last few days haven’t been all adversity. I did have a close encounter with a porcupine climbing a tree as well as playing peek-a-boo with a moose. I was above the tree line when I spotted the moose on the ridge below me, took a few grainy photos and figured that would be it as moose are skittish. I tried to stalk the animal and when I got to where it had been foraging figured she was gone. I thought that with the little rinky-dink camera I use the only way to get better pictures of a moose would be to climb up a tree and wait for a couple of days. Just then the moose poked his head out from behind a tree. I didn’t get a clean picture, but rather several of the moose looking like Wilson, from the TV show Home Improvement. 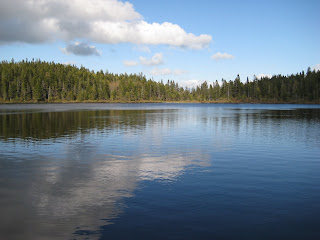 There have also been times in the last two days where the blue sky hiding behind the clouds made a rare appearance and it was an unbelievable pleasure to stand in an environment of absolute silence only to be interrupted by the chirping of a bird or the rustling of treetops in the breeze.
Posted by Kevin Knieling at 1:34 PM

Looks like you are making great progress. I hope you are enjoying yourself. You'll be on Katahdin before you know it. Stay warm my friend.