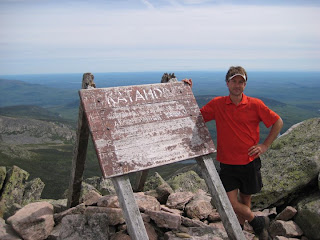 The beginning and end of each trip provides its own challenges and in this instance I would need to hitch a ride out of Baxter State Park to the town of Millinocket, ME so that I could take a taxi to the town of Medway, ME only to catch a bus to Bangor, ME where I could either catch another bus to Portland, ME and then hop a train to New York City, or catch a flight from Bangor.

I was standing on top of Mount Katahdin, reflecting on the 2,176 miles past when two guys made their way up the mountain via a different trail. I met Todd and Jason, who were on vacation doing some hiking in New England. Todd had hiked the entire trail in 2005 an offered up a ride to Millinocket, ME. A small wrinkle unfolded when it dawned on me that I had left a couple of things down at the ranger station. Unfazed, the two said “No problem! We’ll take you to go and get it on our way out”, which happened to be a 16 mile detour on a gravel road. 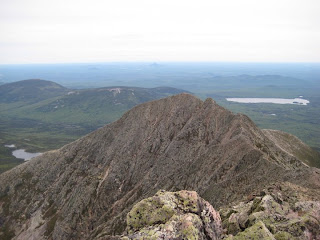 Catching a ride from Todd and Jason allowed me to hike the “Knife’s Edge” trail, which is a ridge line that at times is only several feet wide with steep drop-offs to either side. The photo here shows shows the trail, which runs along the top ridge. There was far more scrambling involved in getting down the Knife’s Edge than getting up the Appalachian Trail.

I enjoyed the trail and even more so as I reflected on the completion of my trip and the prospect of not having to eat another energy bar for the foreseeable future. The vistas were substantially similar to that from Mount Katahdin; plenty of green in the distance dotted with lakes.

Eventually we and after a few sprinkles of rain we made our way to the parking lot, 4.5 miles from Mount Katahdin. While I passed up a refreshment from the four guys fishing in the 100-Mile Wilderness, I wasn’t about to pass up a celebratory beer after hiking 2,176 miles. As we sat in the parking lot chatting, the question was posed as to where I would be going from Millinocket, ME. After mentioning that I had a flight out of Bangor, ME the following day, they said “We can give you a lift there; we are going to be passing by.” Again, I gladly accepted.

The fellows dropped me off at a collection of hotels near Bangor airport (thanks guys). I found myself a hotel room, ordered a pizza and watched some playoff hockey to celebrate my accomplishment. I didn’t take the roof over my head, the running water or electricity for granted. There is something about getting back to nature that can give a new found appreciation for what we consider the most basic of things.
Posted by Kevin Knieling at 1:14 PM