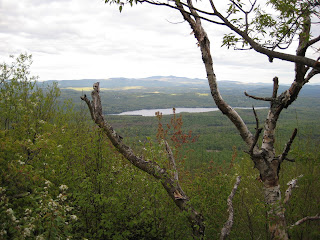 After my relaxing weekend I returned to the trail Sunday evening, putting in only a few miles which turned out to be my shortest day on the trail to date. Since then, the weather has been chilly, but cooperating in a lack of precipitation. The terrain has also gotten steeper…much steeper.

After leaving Woodstock, VT the trail took me to New Hampshire and the town of Hanover, home to Dartmouth College. The trail is routed directly through the downtown area and with school still in full swing, I might have seemed a bit of an oddity. While in town I did the wise thing and checked the temperature for Mount Washington; the highest mountain in the northeast and where I would be several days down the trail. The temperature for Mt. Washington was a balmy 24 Fahrenheit and with the wind-chill felt like 10. While I would be ill prepared for those conditions, I noticed a window of good weather coming up and would have to hurry to make it to Mt. Washington by then. I also bought a pair of gardening gloves to wear that would be covered by plastic bags should my hands get chilled. 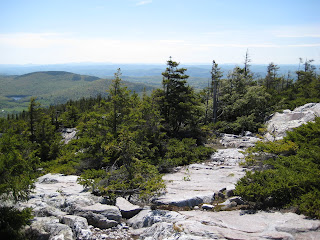 One of the interesting things about New Hampshire has nothing to do with hiking at all. It is that New Hampshire does not have any general sales tax or income tax on an individuals reported W-2 wages. The state needs to generate revenue in some fashion, so it is not a tax free environment, but most individuals aren’t necessarily subject to some of the taxes such as the Timber Tax, levied at 10% of stumpage value (with exceptions) or Gravel Tax that is levied anytime more than 1,000 cubic yards of earth is removed. The island nation of Bermuda is similar in that there is no income tax, but in opposition much of their income is from duty paid on items being brought onto the island. Bermuda is said to have the highest cost of living in the world and when a gallon of milk runs you around eight bucks and a magazine 12, I may not disagree. 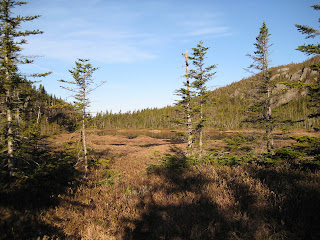 It seems that other hiking groups have been my meal ticket in the past few days. While I have had enough food to survive, there is no way I can carry enough in the way of caloric intake to match what I expend on any given day, not least of which that on same days I am hiking for 15 hours. People have been kind enough to share their vittles, keeping this hungry hiker well fed. I will however begin carrying more food than I have been as the area will become more remote and I will no longer have any food fairies.
In New Hampshire there are a series of manned furnished huts (with full kitchen) that people can use for a fee. For people hiking more than a few hundred miles of the trai 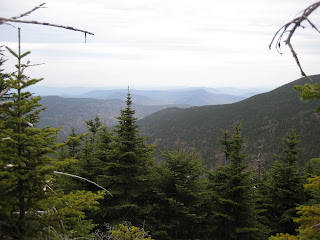 l the huts are free if you help the keeper at the hut. The huts have been a nice place for me to meet people that are out hiking for several days. It is also one of the places where hikers that are only out for a few days have far too much food and don’t really want to carry it with them. In one instance, for dinner I had a one pound box of pasta, complete with an entire jar of sauce. One of the folks that baked some dessert asked if I would have room for some, which I of course did. He then sheepishly asked me exactly how many servings of pasta were in that bowl I just ate. It turned out to be seven. Between the pasta and sauce, I had ingested 2,200 calories in one sitting, most people’s daily recommended intake. 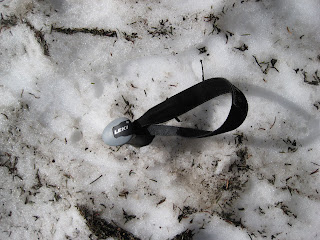 It was also in one of the huts where I was asked, “You do have snow shoes, don’t you?” I don’t but fortunately for me, warmer temperatures have melted much of the snow remaining in the mountains. In the picture here, that is the top of my hiking pole sticking out of the top of the snow, nearly four feet high. While most of the snow hasn’t been quite that deep it has been a slog at times. Most of the remaining snow is also frozen on the surface, allowing me to walk across the top. It does however provide a unique set of problems when descending a mountain. Things can go very wrong with one misstep. Worse still is when the ice on the surface of the snow isn’t enough to bear my weight and I sink through the icy crust to the softer snow underneath. While sinking in the ice on the surface cuts my shins to the point where blood covers the front of my lower leg and runs down into my socks. I was asked at least once if I required medical attention, but I tend to think it looks worse than it is. 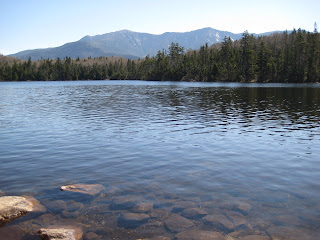 I am still seeing quite a bit of wildlife. On the steep mountain cliffs, peregrine falcons circle nearby to see if I stir up and rodents in the underbrush. On Moose Mountain I saw, yup, you guessed it…a bear. Perhaps “bear” wouldn’t have been your first guess. I saw the bear sitting at the base of a tree before it saw me, so I was able to give it a good scare in making noise. The bear ran for about 100 yards, but unfortunately for me the trail looped around to the point where the bear was now standing in the middle of the trail. A bear may startle easily, but after that initial jolt, they don’t seem to want to move as readily as they just had. I was persistent in making noise and eventually the bear wandered off, but there was a period of time where I was a bit uncomfortable. I am sure it won’t be the last time.
Posted by Kevin Knieling at 4:55 PM