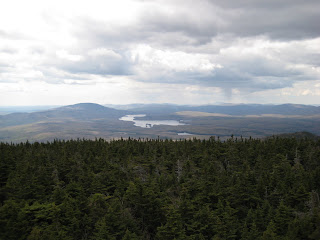 I have hiked about 200 miles since setting off again and am quite pleased that I have nary a blister on my feet to show for it. In the last week the weather turned for the better, providing significant amounts of sunshine, though I wasn’t entirely without rain.

For the last few days I have been in familiar territory as I have hiked a portion of the Vermont section of the Appalachian Trail in 2007 with a couple of friends. I haven’t decided as to whether knowing the section of trail makes it feel longer, as I know exactly where the trail leads, or shorter, being that I see so many things that are familiar. Either way it was fun to reminisce about the past trip as I hiked along. 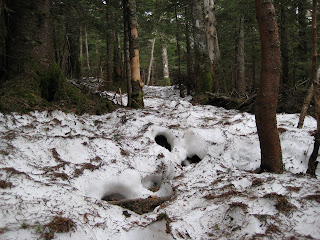 In the last week there wasn’t a day climbing over a mountain where I didn’t walk across snow. In some places it was just an inch or two, but on Killington mountain there are some places where the snow is still over two feet deep. It made for slow going. That being the case it is too early in this area for berries or mushrooms to grow on the mountain to supplement my food stock. There are however fiddlehead ferns for the taking, which are a New England delicacy. The only problem for me is that the ferns need to be boiled twice for 10 minutes each time, which is more than I am willing to subject my fuel supply to.

One of the more exciting things that transpired on that familiar section of trail is that I spotted a moose. In all the time I spent in Vermont and driving past all the moose crossing signs along the road I had yet to see an actual moose in the state. The moose was right on the trail and at first, looking through the trees, thought it was a person with a big backpack, so I continued ambling on. After a few more steps though I thought it might be a bear but wasn’t sure. It was only when the moose turned sideways and began walking that I recognized it for what it really was. I was about 80 feet away and watched the moose for a solid five minutes as we both stood still. It was impressive to see something that large in the forest. I hope it isn’t my last moose encounter. 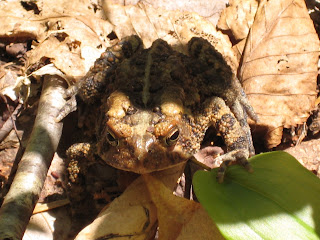 In trying to schedule my arrival in Killington, VT I had to put in a 30+ mile day. On the trail last year 30 miles was about an average day, but as I am still getting my hiking legs under me I have been cautious in how much distance I will cover in a day. The thought did ever so briefly cross my mind that if I hiked an additional 20 miles through the night I could take the following day off in a nice warm bed in Killington.

When I arrived at a shelter after 30 miles, it was crowded with kids from a high school in the area. I decided to stay for the night and have a chat with the kids. At this point it is not often that I can have an ongoing conversation. When I see someone on the trail it is usually limited to “Where are you coming from?”, “Where are you going?” and “Have a good hike!”, so the conversation was welcome. In addition, they had far too much food and were all too eager to share so they wouldn’t have to carry it the following day. 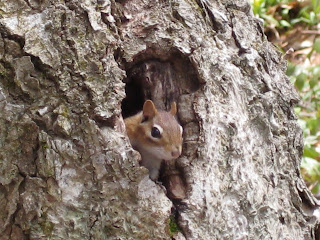 I was out in the morning before anyone was up and it turned into a cold, windy day. The day also included some rain, but were there a finite amount of rain to fall on me for the remainder of the trip, I would have chosen that very day to get much of it out of the way. I knew that by the end of the day I would again have a roof over my head and a hot shower at my usual pad in Killington. Bring on the rain!

Laura was going to be meeting me along the trail and we decided that Woodstock, VT would be a good location. With her driving up from New York City, I even had time to get a full day hiking in. Now unless I am going to put in some massive miles there really is no need to hike in the dark as there is usable daylight from about 4:45 AM to 8:45 PM; 16 hours of it. The problem I ran into though was that I couldn’t find a taxi to take me back to the trailhead at a reasonable hour in the morning. Killington is a ski town and as the mountain closed two weeks ago, everyone is on vacation. The lone available taxi driver in town would be able to bring me the five miles to the trail, but it would have to be at 3:45 AM as he had to pick someone up in Albany, NY. 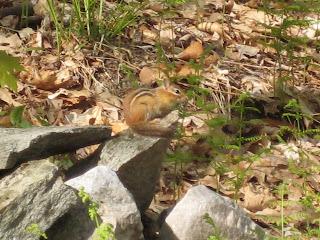 I have always enjoyed night hiking as the trail looks, feels and sounds different. I was only going to get in an hour in the dark, but it was a nice reminder of what night hiking was about.

With my early departure I arrived in Woodstock, VT well ahead of Laura, but it gave me time to hit up a small shop near the trail road crossing for some ice cream and a chat with the proprietor. Following my snack I was invited by Dan to sit on his porch and relax. Dan resides right on the trail where it meets the road and like Jim from last week is a friend to all who pass. Jim had to head to town proper later in the day where he dropped me off and Laura picked me up. 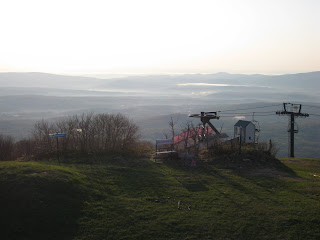 While I only took off one day from hiking, finishing at noon on Friday and starting at four on Sunday made me feel as if I had far more time off than I really did. Laura and I had a quiet weekend and other than getting myself resupplied for the trail and eating a few fantastic meals, little was on the agenda.

Laura also brought me a pair of replacement hiking shoes as those I was wearing have had better days. I generally try not to use a pair of shoes for more than 500 miles as they become compressed and offer little cushion for the feet, putting more stress on the joints and muscles. It was only in the last few years that I ever contemplated having to replace a pair of shoes every 500 miles or a bike chain every 1,000. 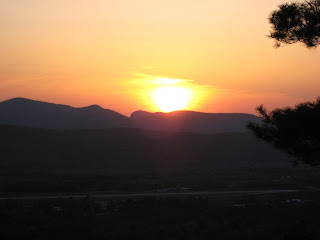 I am getting back on the trail late for a short day, but should be in New Hampshire the day tomorrow. From there I will still have about 440 miles to my destination at Mt.Katahdin in Maine. In between I will still have Mount Washington, NH, where it was 17 degrees Fahrenheit this morning, and the 100-mile wilderness in Maine, which offers pretty much anything you might want providing it is, well, wilderness.
Posted by Kevin Knieling at 10:20 AM

Kevin, Was a crazy man cursing at Mennonites in the Clarendon Shelter? Oh wait that was Matt..my bad.