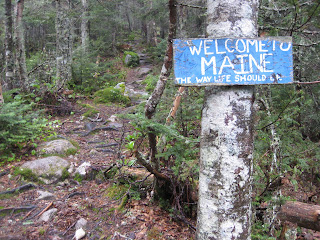 Ugh! In the last three days since leaving Gorham, NH I have been faced with solid rain and temperatures in the mid-40's. Hiking lightweight as I do, that is pretty much the limit of what I can safely tolerate. Good thing that what held me up on a sunny day in Gorham was that I picked up my summer sleeping bag. Actually, the sleeping bag has been fine at night, it is being soaked all day that is the real issue. I hike, I shiver, I stick my hands under my clothes to warm them up. I have resorted to the trusty plastic bags on the hands trick, but that only works for so long.

On the first day leaving Gorham, I didn't make it 10 miles before having to head into a shelter, lay out my gear and dive into my sleeping bag. It took a good chunk of will power to get me to leave the warm comfort of my sleeping bag only to crawl out, put my wet clothes back on and trudge along for another 12 miles in the rain.

There is still plenty of wildlife to be seen on the trail. While ambling along the trail I caught sight of the ass end of a moose as it ran off (I saw another moose, but more on that later). I generally make a fair bit of noise as I hike and while I would like to see moose, what I would like more is to not see any bear. In certain sections the trail is so narrow that I have branches brushing my shoulders to the point where I have to put both hands in front of me to push through. I would really hate to come through a thick section of brush and surprise a bear. Snakes have been plentiful, though mostly the Eastern Ribbon Snake. Oddly enough I witnessed a mouse hopping along in the woods. I prefer to see them there than in a shelter when I am trying to sleep. Other than the odd disturbance by a deer or porcupine in the night, my sleep has been generally uninterrupted by wildlife. 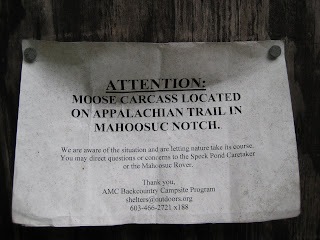 The "other" moose I saw was in an area called Mahoosuc Notch. Mahoosuc Notch has the dubious distinction of being the most difficult mile on the Appalachian Trail. The section of trail is a large boulder field that requires the hiker to scramble over, under and around massive boulders. There were several sections that nearly required me to remove my backpack in order to squeeze through. Mahoosuc Notch was also the last place I had seen snow/ice on the trail and in the rain I tread carefully. The ice was actually beneficial as I could step across the hardened ice rather than having to bottom out in the ravine. Yes, the moose. The picture says it all. I guess that's why people choose to ride a donkey down the Grand Canyon and not a moose.

I have about 250 miles remaining and tomorrow looks as if the weather will be much improved (60 with showers), so I will take solace in that as I plod along.
Posted by Kevin Knieling at 3:03 PM