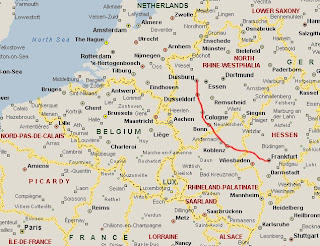 I managed some sleep on the plane but for the most part it was social hour, meeting the other teams. Our group flew to Frankfurt, Germany, but immediately boarded a train for Köln, or Cologne as it is written in the English world. Upon arrival in Köln our entire group made their way, collectively mind you, to the hotel. It was quite a sight. From a guy who thinks tour groups should be illegal, here I was smack in the middle of 22 other people heading to the hotel, all with various sizes of luggage. I went light as I have come accustomed to doing by bringing only a kids school backpack with everything I would need for the next two and half weeks.

We had received the challenges that we were to carry out the day prior so I had the opportunity to do some research on the tasks before even heading to the airport in NY. Some of the clues were rather cryptic and as someone who speaks German and used a network of friends and family in Germany, it took some doing to figure things out. 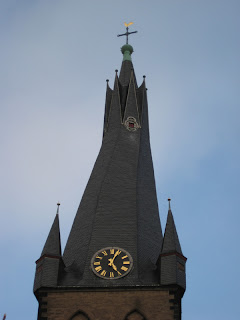 Around lunch time we were set free and given eight hours to go about our tasks and shoot a short video documenting each one. The tasks are not physical, though I wouldn’t mind if they were, but are rather meant to have some basis in history, culture or involve some other way to meet some local folks. The videos we were required to shoot could be clever, funny, quirky, etc., but compelling to the judging panel, who would review the videos after we upload them at the end of the day.
I can’t give away all the tasks we chose (each day we were given a series and we could choose based on geography, interest or otherwise), but I will however show you one video that my teammate David and I shot in Dusseldorf. The video quality isn’t stellar as we were limited to the cameras we were permitted to use, but you will get the idea. In the video clip I had to make up a reason why the bell tower of St. Lamberts Cathedral was warped (the real reason is that the wood was wet when the bell tower was built). I posted a photo above of what the bell tower looks like as it is hard to see how twisted it really is in the video. Without further ado...

Again, I can’t give away the whole day as some future groups will be doing the same tasks, but the day took us around Köln, to Dusseldorf and finally to Duisburg. Unfortunately though, by the time we arrived in Duisburg the “game session” had ended without us being able to complete so much as one task. It was a bit of a rush through the cities, but I had been to all three before, so it was nice to have a quick look around if nothing else.

We had to dash back to Köln from Duisburg so that we could upload our videos for judging. The upload process was painfully slow, so much so, that I missed meeting up with my friend Amanda who is living in Köln. I have met Amanda in six different countries and this would have been number seven (breaking the tie with my other friend Victoria), but unfortunately Amanda had to work in the morning and couldn’t make it a late night.

Having finished uploading our videos for judging well after midnight, we finally had a chance to have dinner. A few teams made it out for a bite and to sample the local nightlife of the city. It would have probably been wiser to have loaded up on sleep, but after a day running around as we did, I needed to eat and decompress. I always felt that sleep was overrated; Four hours of shut-eye would be plenty.

Posted by Kevin Knieling at 6:21 PM