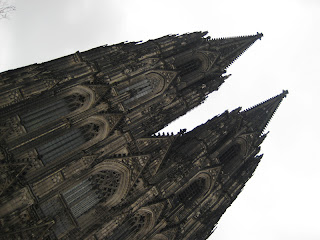 The competition would again find us in and around Köln for the day, though we had to store our luggage at the train station so as to catch a train later that evening to our next city.
The city of Köln is best known for its Cathedral, or Dom, as it is locally known. The Cathedral is a UNESCO World Heritage Site and is described by UNESCO as an “exceptional work of creative human genius”. While the cathedral wasn’t related to any of the challenges set forth for the day, my teammate Dave and I stopped in to have a look. I have been there several times, but it is no less magnificent. Pictures cannot do it justice.
One of the tasks for the day had us find a particular building in the city and talk about the architect. We unraveled several clues to reveal the location where I am standing…and had to "roll" with whatever happened.

We again did the dash about town, but later in the afternoon were able to find solace at a small restaurant overlooking a quaint cobblestone street and the Rhine River. It was beyond pleasant to relax for a few minutes and take in the hundreds of years of history surrounding us. 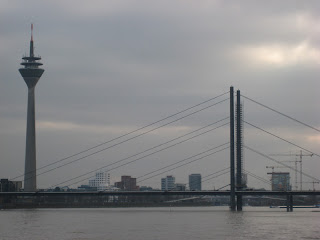 In the evening all the participants of the competition converged at the Köln train station to catch a train to…Amsterdam. I had been to Amsterdam several times and have a couple of friends there, so it was a welcome destination. It was a late night arrival which involved little more than dinner.
Posted by Kevin Knieling at 5:21 PM