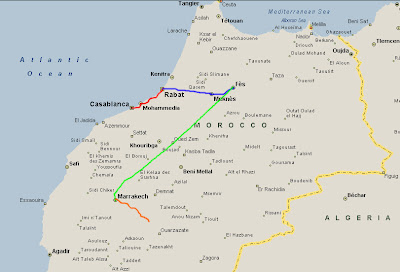 My plan for the day was to take care of a few things at an internet café and head out of the city to the Atlas Mountains. I had spent more time cities than I needed to, so I was looking forward to the snowy mountains of Morocco.

As I was checking my e-mail, Ben, who I had met in Rabat, mentioned that he too would be heading to the mountains from Marrakech later in the day. It only made sense for us to head out that way and hit the mountains together. 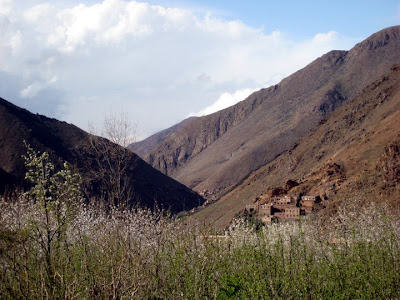 I met Ben in the Medina and instantly realized that it was the Marrakech everyone talks about. Ben and I chatted about hopping a bus out to the town of Imlil, the starting off point for climbing Jebel Toubkal, the tallest mountain in North Africa, but opted to hire a "grand" taxi instead.

In Morocco each city has two different types of taxis. The “mini” taxi is one that looks like any severely rundown late model car and for a dollar or two will take you around town. The cars are always painted a single, uniform color, but that color varies from city to city. The “grand” taxi is always an ancient beige Mercedes sedan that has seen better days; much better days. The grand taxis only travel between cities, have a fixed price per person and do not leave until they are full. Full means four passengers in the back and two in the front in addition to the driver. That is seven people in a car designed to hold five.

It is possible to negotiate with the grand taxi drivers to hire the vehicle for oneself and $35 for a one and a half hour taxi ride seemed like a bargain to us. Ben and I also wanted to get out to the town of Imlil and set everything up to begin our climb up Jebel Toubkal the following morning. 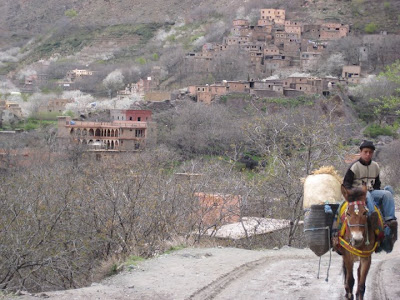 Much like the Rockies, the Atlas Mountains jutted out of the earth with little lead up. It was like driving west from Denver. We began to see small villages dotting the landscape and thousands of wildflowers. It was spring and everything was in bloom. Our driver mentioned though that in two months everything would be brown from the summer heat.

As we neared the town of Imlil, Ben and I discussed how long it might take us to set up with what we would need for our climb: ice axes, crampons, sleeping bag, etc. While it was warm in town, the mountains were white and another foot of snow was expected in the next day or two. Our question of timing was answered as soon as the taxi stopped in Imlil and I opened the door of the taxi. We were set upon before even having both feet out of the car. Mohammed (of course that was his name) greeted us and explained that he had everything we might need for the trip, including a place to stay for the night which included dinner and breakfast. While it seemed a good value, Ben and I wanted to discuss it over some Tagine, a slow cooked stew of chicken, potato and vegetable, braised at a low temperature in a ceramic dish. 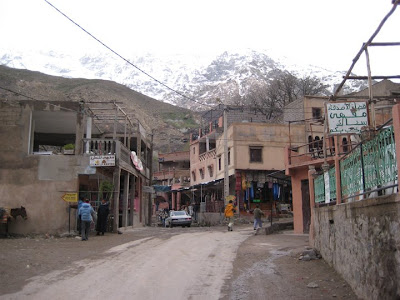 In the end, Ben and I decided to go with the package deal as the time and money spent cobbling everything together wouldn’t have been worth it. It also gave us more leverage getting everything in one place. The only other thing we needed was two days worth of provisions which Ben took care of while I was sorting out our gear needs.

Once geared up we took a half hour walk from Imlil to the village of Armoud. The house in which we were staying was in the process of being built and the bathroom was outside, but Ben and I had all we needed each with a mattress on the floor. It was far more posh than accommodations I have had before starting other climbs.

We met Mohammed's family though they only spoke Berber. As you might imagine communications were limited. For dinner they served us up a magnificent tagine and with little else to do thereafter, I read until I nodded off.
Posted by Kevin Knieling at 6:52 PM