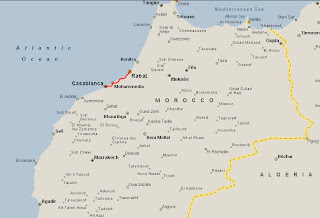 It was a beautiful sunny morning with the temperature hovering in the 70’s; exactly what I was looking forward to after spending the majority of the time in Europe contending with the mercury in the upper 40 degree range.

Whenever I visit a new country I always try to visit their Stock Exchange (should the country have one) and their Central Bank. International equity markets have always been an interest of mine and even though I am not “working”, the interest has not subsided in the slightest. In my travels I have visited over 25 Stock Exchanges and Central Banks, each idiosyncratic. Some, like the Mongolia Stock Exchange trade only several days a week and even then only for several hours. When I arrived at the exchange in Mongolia the trading floor was devoid of people and there was nothing stopping me from just walking right in. There is always something to be learned form the biggest powerhouse of an exchange to the smallest and most illiquid. 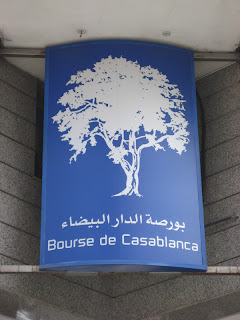 In my search for the Casablanca Stock Exchange I learned that it wasn’t just my taxi driver the night before that wasn’t familiar with the streets, but pretty much everyone. Part of the problem is that many of the street names are being officially changed from their historical French name to Arabic. Another issue is that most streets have the name “Mohammed” in them. The only saving grace is that there are almost always two main thoroughfares, one running east/west and the other north/south, named Mohammed V and Hassan II. The roads are named after the two Kings of Morocco holding the throne prior to the current Mohammed VI.

I found the exchange in time for my meeting, though I am sure that describing what transpired would not be nearly as much of interest to my readership as it is to me so I’ll keep it short. In some ways the exchange was fairly typical for its size, but it is still a developing marketplace. The exchange trades 77 stocks, of which Morocco Telecom accounts for about 25% of the market capitalization. That ratio for the telecom issue isn’t uncommon for developing countries. The Iraq Stock Exchange, where about 90 equities are traded is a somewhat different story as the biggest issues are actually banks. There have however been some rather unusual circumstances which the Iraq exchange has been working under for some time. But I digress… 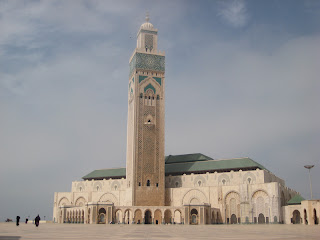 For most visitors, there is really only one thing to see in Casablanca as the city, for the most part, is the main city of commerce in Morocco. The Hassan II Mosque though, is well worth the visit. While most mosques are closed to non-Muslims, the Hassan II Mosque is open to visitors for a fee when it is not prayer time.

Hassan II Mosque is a massive affair, which is the third largest mosque in the world. I liken it to a sports stadium in as it can hold 25,000 people inside (another 80,000 outside), has an admission fee of $15 (a bit light for a sporting event) has escalators and elevators (pretty atypical for a mosque), heated floors (OK, not the same but a hockey rink has cooled floors) a retracting roof (Cowboy Stadium anyone?) and cost more than a few hundred million to build. The official estimate is 500 million, but with a wink and a nod from my guide I was told it was well over one billion. It took 6,000 craftsmen six years to build working around the clock. 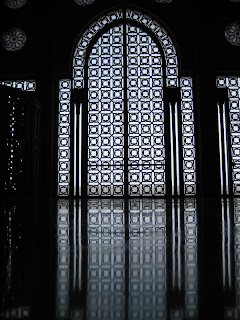 For those of you holding dreams that Casablanca is anything like the film of the same name, I will have to dispel that myth. While there is a Rick’s café, it is solely a tourist trap. Having run out of things to see in Casablanca I hopped a train to the capital city of Rabat. If Casablanca is the New York of Morocco, Rabat is the Washington D.C..

The train to Rabat was just over an hour and as soon as I walked out of the train station in Rabat I noticed far more tourists than in Casablanca. One person later mentioned to me that it is the case as there is far more to see in Rabat than Casablanca.

In looking for a hotel in Rabat I was shot down on my first choice as they were full. As I was walking out of the hotel there was someone walking in that was soon subject to the same fate of looking elsewhere for accommodations. I met Ben as we were both walking down the street towards another hotel. He had a place in mind so we both headed over there and were able to find a place to hang our hats for the night. I generally haven’t had problems finding hotels in my travels; though Calcutta, India is a notable exception and really…you don’t want to be without a place to stay there. 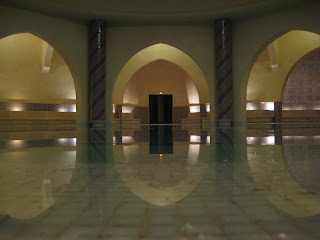 Ben is a freelance writer that is planning to head south through Western Africa for the next several months. We decided to take a walk around the city and as he had been in Rabat before, he led the way. We ambled through the Medina (market) and Kasbah (yes, a song by The Clash but also a fortress where a ruler would govern from in times of war). We received very little in the way of hassle from touts or salesman peddling their wares, which I was told would be the exception, not the rule in the cities of Fez and Marrakech. The city of Rabat was far easier to navigate than Casablanca in both the way it was laid out and that there was far more in the way of street signs. 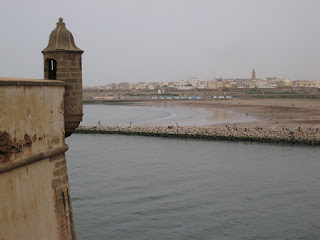 We made our way down to the ocean and noticed some surfers catching a few meager waves. From down at the oceanfront it was easy to imagine the importance of the city in the days of the seafarers. The walls surrounded much of the city, protecting it from the sea and the invaders that plied the waters. The city itself, founded in the third century BC, was ruled at times by: Phoenicians, Romans, Barbary Pirates, Berbers, Almoravids, Almohads and the French. The city of Rabat was even once attacked by the Austrians. The Austrians!?!?

Ben and I went for a bite to eat at a local restaurant and more than the food, what I noticed was that several cats were swirling around our feet. Animals in a restaurant aren’t considered a health hazard as in the western world. There is no shortage of cats in Morocco. Where some countries have an excess of dogs milling about, Morocco is overrun with cats
Posted by Kevin Knieling at 2:37 PM