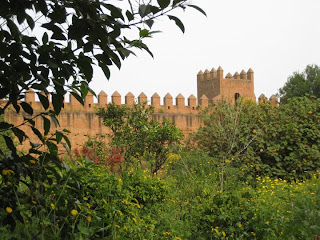 In the morning Ben and I were both headed to the same place, the Chellah. Built over 2,000 years ago, the Chellah is an abandoned fort that while in ruins, still gives a glimpse into its former glory. The isolated location of the fort was a wonderful respite from the cities of the past two days. The area was largely overgrown, not to the point of needing machetes to hack or way through, but enough to give it a ruinous, deserted quality. In the midst of the greenery were trees of fig, olive, orange and grapefruit as well as thousands of wildflowers in all colors. And while the fort was deserted by people, it is currently home to several hundred storks. As storks are viewed as a symbol of good luck, they are left to multiply at the Chellah. 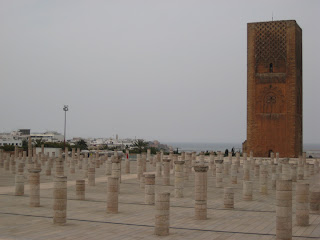 In the afternoon Ben had to go to collect his passport from the Mauritanian Embassy in an effort to get a visa for the country, so I took a walk over to the mausoleum of Mohammed V and a half built minaret. Construction on the minaret began in 1195, but upon the death of the King who championed it, construction was halted. While the minaret was to be the tallest in the world, the Kings untimely demise saw an end to that, leaving the structure only 144 feet tall, just over half its intended height. The mausoleum was however complete and while not quite the Taj Mahal, it was exquisite and supposedly one of the finest examples of Almoravid architecture. I can’t claim any expertise on Almoravid architecture, but I was impressed with the craftsmanship of the mausoleum. 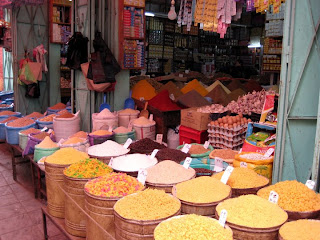 I planned my visit to the Central Bank in Rabat, but as it turned out that the bank was closed to the public. As a saving grace the Central Bank did have a currency museum. The majority of the museum related to coins, some 2,000 years old, but there was a small collection of banknotes. Most everyone seems to collect something in their lives and I happen to collect banknotes from foreign countries. The way I think about it, there are worse things to collect than money.

After my visit to the bank I decided to further immerse myself in the culture of Morocco by heading back to the Medina (market). There 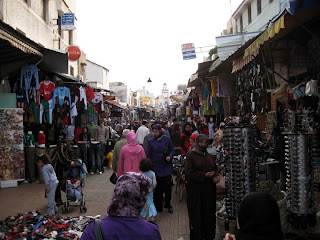 were all manner of things for sale in the Medina: dates, figs, lentils, corn (crushed and otherwise), any manner of spices, reptiles (turtles & chameleons), oranges, knock off purses, shoes, clothing & cell phones. I laughed at the juxtaposition of someone selling cell phones sandwiched in between a stall peddling figs and another selling organ meat. While the market was really a feast for the senses, stranger still was when I wandered through the market listening to the local sounds and heard the band Coldplay coming from inside one of the shops. The audio clip below doesn't include Coldplay, but it might give you of an idea what it sounds like inside a crowded medina with hawkers peddling their wares. 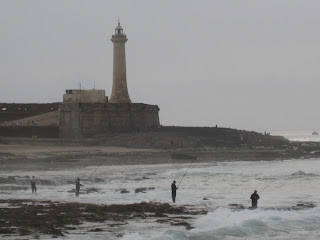 As it was a warm day I decided to head to the oceanfront and the cool breeze it was offering. I considered getting a little surfing in, but the waves were virtually non-existent and in any case unsurfable.

For dinner I was still looking for that elusive dish of couscous. It seems though that in Morocco, Friday night is couscous night. As I was wandering around I randomly ran into Ben and Laurie, a girl he met in town. The three of us decided to find someplace to settle in for the night, which turned out to be a completely smoke filled cafe. We all shared travel stories over a few drinks, my favorite being that Ben was once denied boarding on a plane in Paraguay as he had spent the several weeks prior in the jungle and was deemed too dirty. Paraguay of all places. Perhaps I found the story entertaining as I had a similar experience at a Sheraton hotel after having been in jungles of Borneo for a month.

Posted by Kevin Knieling at 3:18 PM