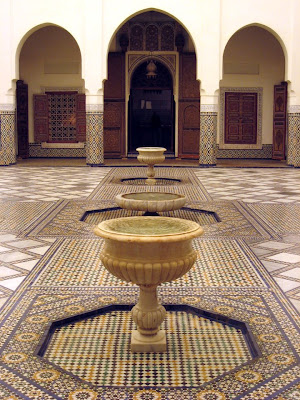 I had a little sightseeing on the agenda for the morning, but couldn’t begin without stopping for a honey crepe. The culinary traditions of France made their way across the Mediterranean along with other aspects of the culture and I wasn’t disappointed.

On my stroll through Marrakech I passed by La Place, but it is a very different place during the day. During daylight hours, the square is frequented by snake charmers, henna artists and other people trying to cobble together some semblance of a living.

I didn’t have a very aggressive schedule for the day, but it did involve a significant amount of walking, my favored mode of transport when discovering a city. While walking isn’t always the best way to get around all cities, Marrakech was certainly walkable if I was willing to put up with a little heat and many touts.

I started my day by visiting the Marrakech Museum, though it did take some effort to find. I had learned my lesson with unofficial guides, so I found a child to show me the way. It was a mutually beneficial arrangement. The museum is a restored palace that boasts both traditional and contemporary Moroccan art among its treasures. The real draw though is the palace itself. 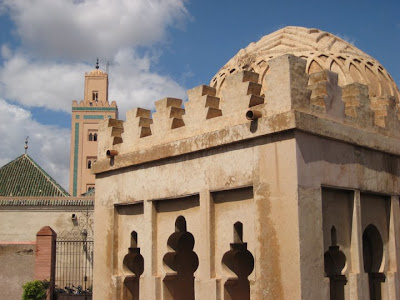 I also stopped at the Medersa, or Koranic School to get a sense of what it was like to be one of the hundreds of students that came from around the world between the 14th and 16th centuries to study Islam at the school. While the school is no longer in use I was able to get a good sense of what it would have been like to live in the cramped concrete rooms with only one small window. I'll pass, thanks.

Since arriving in Morocco I had been looking for an authentic hammam and I finally found one near my hotel in Marrakech. Many houses in Morocco don’t come equipped with running water, or at least not hot water, so the hammam is where people come to bathe, shave, brush teeth and socialize. How do I know the hammam was authentic? They overcharged me. Significantly. Actually, it was quite obvious that it was a local affair, first of which being that there were no signs for the hammam whatsoever. All the locals know exactly where to find them. The hammam was a series of three successive 20’ by 20’ 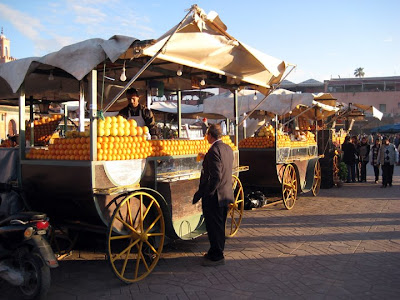 tile rooms akin to a wet, albeit very wet, sauna without the seats. Upon entering each person is given a bucket to fill with hot water but to also use in cordoning off some floor space. The corners of the room were the high rent district as everything sloped to the drain in the center of the room, meaning that if you weren’t in a corner you got another persons dirty water runoff flowing past.

In the hammam there is also a common treatment called Gommage in French, where people slough their skin with a rough glove thereby removing dead skin. Make no mistake though that a hammam is not a spa, but rather a place to get clean. I opted for the treatment to get the true experience and for all of $7 and it worked like a charm. The treatment was by no means gentle, but I am quite certain that I had nary a dead skin cell left on my body when the guy got through with me. Not only that, but my entire body was bright red from the abrasion. 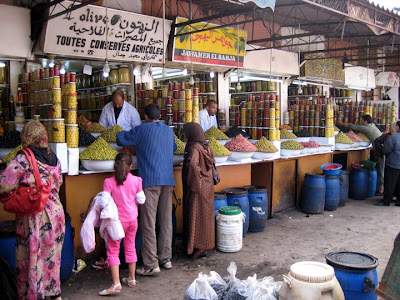 But wait, there’s more. Following the scouring is the stretching of body parts reminiscent of visiting the chiropractor from Hades. As I sat on the wet tile floor I was grabbed by various limbs, stretched and contorted until nearly every one of my joints made a loud popping noise. I like to term it “good pain”, but my back made a noise as if someone was stepping on a roll of packing bubbles. When I was done though, clean of all the grime, I felt quite good actually.

My only goal for the evening was to sample as much Moroccan fare as I could possibly cram into my gullet. I wanted to sample as many of the Moroccan delights as I could before leaving the country. I walked out to La Place and began peeking at what was on offer at the various food stalls. I started with grilled lamb sausages that were served with fresh salsa. I had them the night prior with Ben, but they were just that good. I moved on to grilled shrimp and then had my main meal: snail soup followed by goat’s head. It might not be on everyone’s list of foods to try, but I had to give it a go. The snail soup tasted substantially similar to escargot that might be served in a restaurant in Paris. The goats head, well, was interesting. The jowls were probably the tastiest bit, 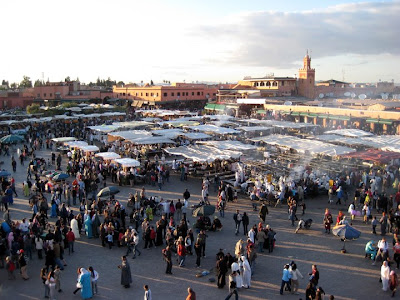 but the brain was a bit mushy and I couldn’t really get used to the texture of the eye sockets. For some reason the eyeballs themselves aren’t consumed. I finished off with some honey cake for dessert and called it a night, waddling back to my hotel. I was stuffed beyond belief.
Posted by Kevin Knieling at 7:43 PM