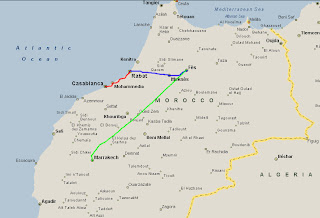 What can I say about spending eight hours of the day on a train from Fez to Marrakech? I slept the first three hours, so it did seem to go by quite quickly. In contemplating my transit between the cities there was the option of taking a flight, but in the grand scheme of things I had a seat with a view and brought plenty of food with me to share. Sharing food is what people in Morocco do, harking back to their nomadic Berber ancestry as desert travelers. Most of the train passengers weren’t heading the entire distance to Marrakech, so there were tons of local folks on and off the train to speak with, which is another factor I used to determine as to whether I would fly or not; face time with locals.

Upon arrival in Marrakech I found myself in the most cosmopolitan, or rather developed city in Morocco yet. There were more faces of tourists than any of the three previous cities that I had visited combined. There was also a hop on, hop off tour bus akin to that in western cities. This was most certainly not the Marrakech of the 60’s era. 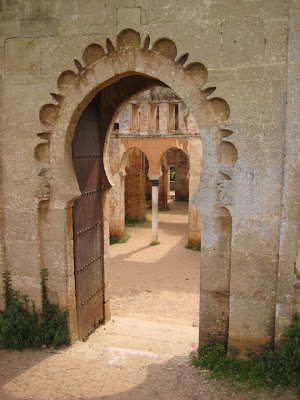 I found a hotel room for the night in the new part of town and set out on my own version of a walking tour. My walk confirmed what I had initially seen; many tourists in a developed area. I figured I would try to beat the tourist happenings by asking the hotel proprietor where I could find a hammam (Moroccan bathhouse). Hammams are such an integral part of life for many Moroccans as they don’t have running water in their home. The hammam offers a place for them to get clean and socialize. I located the hammam that the hotel proprietor recommended, but it was more like a western spa than any hammam I have ever seen.

I was somewhat disappointed in my evening in Marrakech, but I was in the new city and not the Medina. I was going to save that for another day.

In speaking with so many people using my somewhat limited French I cursed myself for not speaking the language better, but when I was living in Paris I had other things to do. I would usually be in the office from the opening of the French Stock Exchange to the close of the New York Stock Exchange, leaving me with a 13 hour workday when things ran smoothly. I learned French by immersion. Even in a country where I don’t speak a lick of the local language, I always make an effort to learn a handful of words and phrases. It makes such a difference in connecting with the people. My few phrases of Arabic were useful in the cities of Morocco, but the main language in rural areas is Berber and oftentimes they speak no other language. Part of the fun of travel is trying to communicate.
Posted by Kevin Knieling at 4:03 PM