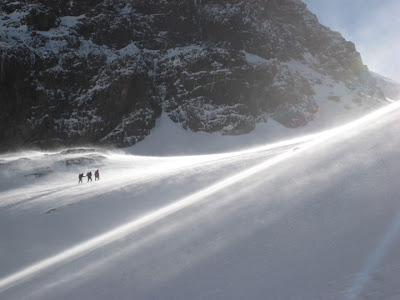 Nearly a foot of snow fell overnight, so the plan Ben and I had concocted of following everyone else was going to be the winner. Another key aspect of the plan was in following the others tracks we might be able to keep our feet dry. Like so many other times in my travels, I employed plastic bags as clothing, this time around the outside of my boots, so as to keep the powdery snow out. I knew plastic bags would be of limited use as I was wearing crampons, spikes on the bottom of my boots to keep me from slipping on the ice. Even if my feet only stayed dry for an additional ten minutes, it was ten fewer minutes of misery I would have to endure.

In theory our plan of following the others was brilliant. The one thing we didn’t count on though was that the wind would be howling, even at lower elevations. It took all of three minutes for the tracks of people ahead of us to be completely covered. 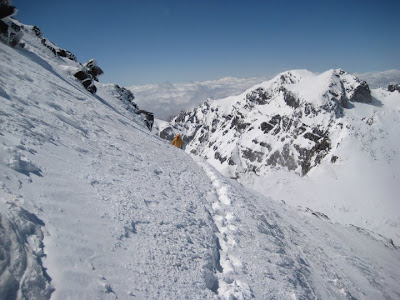 Ben and I slogged on, each taking turns breaking trail through the snow. As we slogged on we eventually caught the group in front of us and paused with them for a little snack break. As we continued on and gained elevation the wind pushed harder. Ben and I were completely under-clothed for the climb, but at least he had a waterproof jacket. I on the other hand was wearing a short sleeved shirt, covered by a long sleeved shirt, a fleece jacket and as a balaclava/hat I was wearing a shirt and baseball cap. The last trick up my sleeve though was a plastic rain poncho in the event I would need some wind/waterproof protection. 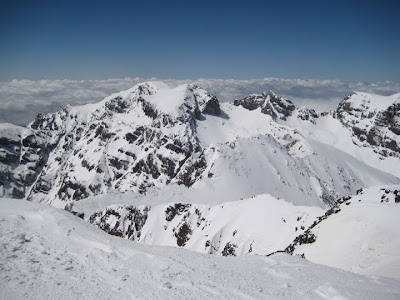 It was a tough slog and with no real trails, we only had a vague idea as to the where we needed to go and the best route to use. As we weren’t able to see the top of Jebel Toubkal, we did all we could in reading the mountains and determining the best route. We followed some valleys between smaller mountains and ascended the open flanks of others. At the steepest section I was front pointing on my crampons, but no ropes were required. There were however a few spots where things would have ended quite badly should one of us have lost our footing.


The day grew colder and windier as we ascended. I had to put on my plastic rain poncho and in the winds that were blowing up to 60 MPH, proved to be a challenge. It was only with Ben’s assistance that I was able to don the poncho. It didn’t take long though for the wind to begin tearing it off my body. 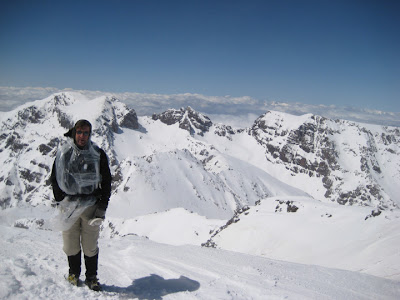 Near the summit I saw a few tracks which I though would lead us straight to the top. I was getting awfully cold in the wind so I was looking forward to reaching the top of the mountain and heading back down to lower elevation. The tracks led to a false summit dashing my hopes, but I was able to see the real summit and the route leading to it.

Within minutes Ben and I walked across a ridge to the top of Jebel Toubkal. The view from the top of the tallest mountain in Northern Africa was awe inspiring. There were snow capped peaks in every direction. Ben and I took a few obligatory photos and enjoyed the view for a minute. As we were getting ready to head back down one other person came up and asked if he could follow us down. He seemed a bit shaky, but well enough to walk.

The wind was relentless, tearing at my plastic jacket and pulling it off my body. While the wind on the way up was at our backs, it was now hitting us square in the face on our descent. I donned a pair of extra socks as gloves and tried the best I could to shield my face. When I looked at our new partner I could see that the wind had blown his hood entirely off and he was standing prostate with his eyes wide open. Ben grabbed him by the arm as I tried to cover his head and face. He was making incoherent noises as we tried to usher him further down the mountain. By this point, my plastic rain poncho had been completely torn off my body in the wind. We just tried to keep our friend walking and at one point had to get one of his gloves back on his hand as it was sliding off. It felt like chaperoning the walking dead. Within 15 minutes he seemed to be recovering in that we were descending out of the wind. Shortly thereafter we came upon the rest of his group, where we left him and continued down.

The trip down was far easier than up, but could have been made much simpler still had I a snowboard. Some sections might have been a bit gnarly, but it would have taken us a fraction of the time. 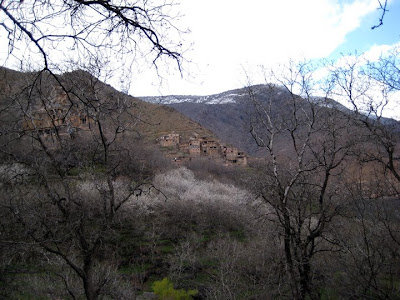 As we descended, Ben and I figured out our plans after leaving the area. Ben wanted to go skiing at a nearby mountain and I was hoping to be back in Marrakech by the end of the day. We walked throughout the day and made our way back to the town of Imlil.

As it turned out, Ben was going to head back to Marrakech before going skiing, so we met up with some folks at the taxi stand and tried to get a ride back to Marrakech. Our initial plan was to hop a public grand taxi back to the city. We thought about privately hiring a taxi to take the two of us, but as it would have quadrupled the price, we figured we would wait for the one remaining person to fill a seat as there were already three other people waiting for a ride to Marrakech. In my capitalist ways I understand that people want just compensation, so I offered to pay for the additional seat and leave it vacant. No dice. Despite everyone, including the locals lobbying on our behalf, it didn’t work. It wasn’t long though before a sixth passenger crammed in the taxi: four in the back, three in the front. At one point on the drive I thought that I should have just ponied up for the taxi and hired it for ourselves, but it was an experience. 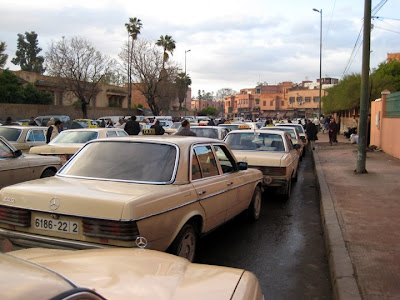 Back in Marrakech Ben and I checked into a hotel and immediately went out to La Place, where hundreds of street vendors were setting up food stalls. On offer are various sea foods, all manner of mammals as well as the odd bits that don’t fall into either category. The food stalls have bench tables ringing their stalls and are vocal about drawing in business. Ben was looking for a stall doling out sausages at which he had eaten the night prior. The two of us did an admirable job of sampling various foods, but after a few hours we were full and I wouldn’t be able to eat another thing…until breakfast of course.
Posted by Kevin Knieling at 7:19 PM