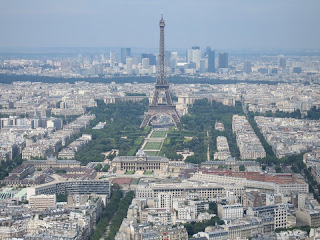 The competition was over and I had the opportunity to catch some well needed rest after the last week of activities. The group had a free day in Paris before flying out the following day.

My game plan for the day was to visit some old haunts from when I lived in the city. I met with Elizabeth at the Garnier Opera, which is just a splendid building. In the year and half I lived in the city it was completely covered up for restoration. I had seen it since, but am still impressed with the intricacy of the structure.

It was an amazingly beautiful spring day and it seemed that all of Paris was making use of the outdoors on this Saturday. I was hoping to have lunch at my favorite sandwich shop, but the plan was thwarted as the shop was no longer there. As plan B, and a good one I might add, we stopped at a grocery store and bought a few things to have somewhat of a picnic in the Tuileries, the Parisian equivalent of New York’s Central Park. The park is just behind the Louvre and my first apartment in Paris (I moved when my apartment was burglarized). The Tuileries used to be my backyard. 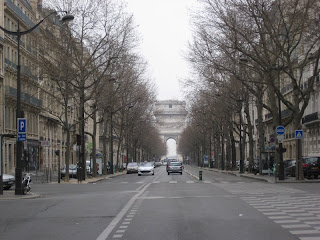 So much of Paris has changed in my absence, but they do still sell Eiffel Tower keychains, though they are just priced in Euro instead of Francs. There is also a new scam in town, perpetrated by people with varying levels of commitment and conviction. It goes something like this: the person pretends to spot a gold ring on the ground a second before you do. As they are allegedly not legally residing in France, they can’t turn the ring into the police or sell it. They try to give you the “gold” ring, which is in fact worthless so that you can sell it, asking for a few Euro so they can get something to eat. Elizabeth and I got that scam three times in a matter of 10 minutes. By the third time I told Elizabeth to pull out the video camera, which she did, much to the chagrin of the scam artist who made at least several obscene gestures in our direction as they stormed off.

We wandered past the Eiffel Tower, down Rue Kléber and past the second of my old apartments in Paris. It was a great place and I had a wonderful view of the Eiffel Tower, but when I returned home from a business trip in New York, the water main in the building burst, flooding the entire building and leaving it without running water. It was time to move…again. 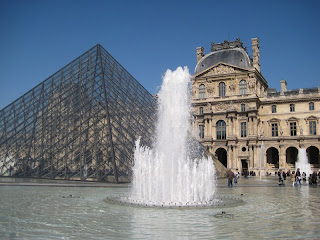 After a long, sunny day walking around the city, Elizabeth and I wanted to take pause and embrace all that is Parisian by sitting at an outdoor café and having a glass of wine. As the sun was growing low in the sky and a chill permeated the air, we opted to stop in the Buddha Bar instead. The Buddha Bar was one of the first places I was taken by colleagues when I had first come to Paris on business. So while I didn’t get to revisit my sandwich shop or an outdoor café for that matter, I was able to further reminisce about my time in Paris.

To close out the Competitours experience after our free day, the majority of the gang went out for a group dinner. It was fun to speak with people about their take on the game as well as getting to know a little more about some of the contestants. The experiences of the group are disparate, so I always appreciate another take on the world.
Posted by Kevin Knieling at 10:37 AM