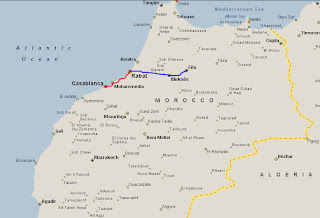 First thing in the morning I said goodbye to Ben and hopped the train from Rabat to the city of Fez (yes, of the hats with the same name). On the train I met a girl from Arizona who was going to be teaching in Morocco for two years. She seemed and it would later be confirmed that she wasn't exactly the savviest of travelers. I generally don’t cast judgment but I really wondered how she got out of the United Stated, much less navigated Morocco.

Upon arrival in Fez I didn’t find the hotel I was looking for immediately, but in my missteps stumbled upon another branch of the Moroccan Central Bank. I was able to pop in and have a little talk with someone there. My visits to the Central Banks across the globe always seems to differ widely in the content and level of the person who is designated to speak with me. I always try to make an appointment, but in places like Singapore it isn’t at all possible due simply to their culture of pushing responsibility to someone else. While my meeting in Fez was not the most informative, I did collect some insight into the banking and economic environment of Morocco.

Following a short walk I found the hotel I had been searching for and who should be checking in, but the same girl from the train. Now I am not sure I have ever seen this happen in all my travels, but she actually talked “up” the price of the hotel from the original quote. There was a bigger problem though as she had an unofficial tour guide latch on to her. It is prevalent in Morocco for individuals to offer services as a guide in an effort to earn a few extra dirham and they can be persistent. When the girl mentioned that she no longer wanted the guides services he became enraged and demanded money. To the girls credit she remained calm when the guy began shouting “F--- You, I kill you!”. I grabbed the girl and told her to go to her room until the guide leaves. 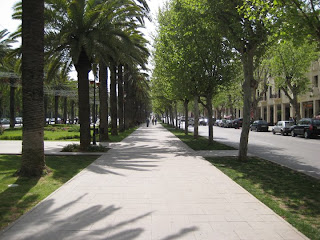 I went for a walk around the downtown area of Fez to see what the city was all about. The downtown area was far more decentralized than Rabat, but it just gave me more of an opportunity to walk around. There were hundreds of Moroccan flags flying throughout the city as the King was in town.

During my walk I was set upon by the same unofficial guide that was harassing the girl in the hotel. He tried his same threat tactics, but I wasn’t buying it. Most locals go for sympathy to try and separate tourists and their money, but this guy’s game was to be threatening and in your face. It is always disconcerting to be in a foreign country and have a local threatening you, but my read on the guy was that he was all bark and no bite. Eventually the guy wandered off, though I did keep an eye out over my shoulder. This guy was the exception to what I have found in my travels, not the rule so I didn’t think much of it.

In the afternoon I went over to the Medina (yes, every city has a Medina). The Medina in Fez is much larger than that in Rabat (several square miles in fact) and more intense. Vendors are more aggressive in making sales and unofficial guides are rampant. 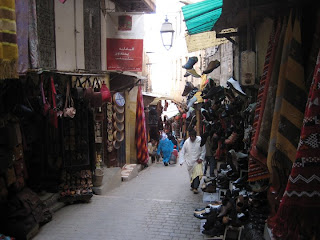 My goal for the afternoon was to get completely lost in the Medina and try to find my way out. The old medieval streets are a maze and rarely run in any pattern. In my travels I have stumbled upon some of the best things, or met the nicest people when totally away from what are considered areas in which a traveler should be.

I started out by visiting the Mellah, or Jewish quarter, near the Medina. While Morocco is approximately 99.7% Sunni Muslim, there are a handful of Christians, some Baha'i and about 5,000 people of the Jewish faith living in the country and have been since the early 1400's.

With a cryptic map showing the main thoroughfares of the Medina I was able to navigate myself to an area where numerous leather tanneries were located. I did however have a little help from the pungent odor emanating from the tanning area. Tanning leather is a somewhat lucrative if not unhealthy profession for Moroccans. There are large vats filled with chemicals in which the workers die the hides and from what I hear, being exposed to the chemicals all day every day will cut down on the average person’s lifespan rather substantially.

When I was looking for a particular museum I was at a loss, so I figured I would engage the services of one of the unofficial guides to help me out. I didn’t get the greatest vibe from the guy so when he made numerous turns and moved quickly down deserted alleys, I made it a point to remember every turn. My memory rewarded me as when the guide thought I was sufficiently lost he demanded 20 times the money that we agreed. I didn’t have trouble finding my way out, but it was not all that pleasant with him walking behind me hurling every insult he could think of in his broken English.

Having been in the hustle and bustle of the city all day I decided to walk up to a hilltop on the outskirts of town to have a look down over Fez. To me it was like looking at New York City from a plane. From well above the city appeared quiet and peaceful. While up on the bluff I decided that I had enough of cities for the time being and wanted to head south to the Atlas Mountains. I had planned on staying two nights in Fez, but the draw of the mountains knocked it down to one. I would take a train to Marrakech in the morning, the jumping off point for the mountains.

I dove back into the Medina in Fez and was unable to get myself lost as the tourist bureau recently put up signs for several walking tours through the medina. There were a few times where I did end up in a place I wouldn’t have expected, but invariably I would come across a sign pointing me towards some recognizable landmark. 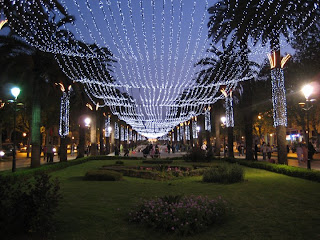 I continued on my own through the Medina and at one point there were several large men with communication radios and weapons. All the people cleared to the side and stood watching so I did the same. It took several minutes of conversation to learn that not only was the King of Morocco in town but the Prince was as well. The Prince happened to be in the Medina saying hello to the people of the city. When the Prince walked by, much to my surprise the Prince didn’t look any older than six. I saw the Moroccan Prince and in the distant future when he is King I can say that I saw him in Fez.

I enjoyed my day of exploration, but left the medina to check the train schedule. I had the option of an overnight train, but as you may well imagine, there was little appeal in having to try and get a nights sleep while click-clacking along.
Posted by Kevin Knieling at 3:53 PM