After my time in Europe I was off to Morocco and I had far too much gear, especially when the temperature was going to be mostly in the 80’s in Morocco. With a little convincing, OK, a lot of convincing, I was able to store some things at my hotel in Paris for 10 days until I returned from Morocco.

As I had some time before my afternoon flight I made one last attempt at my favorite sandwich shop, but my efforts of heading across town to the other location went unrewarded as they were not open on Sunday. With some time still on my hands, I decided I would head to the Left Bank of Paris and check out the neighborhood to which I moved after the water main incident in my second apartment. 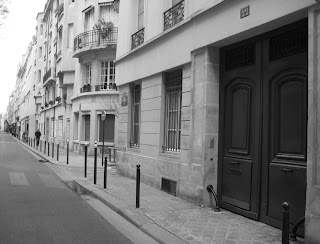 The Left Bank is a far different neighborhood from the family district near the Eiffel Tower where I had lived prevoiusly. While technically the Left Bank is all of Paris that sits on the south side of the River Seine, Left Bank refers to an area around Boulevard St. Michel that is frequented by the artistic and/or Bohemian set. The area is awash in cafes, which at some point in history you may have seen the faces of Picasso, Camus, Hemmingway or Sartre sipping a coffee inside. I walked by what was my third apartment in Paris and while I couldn’t see anything inside, the door was still there as were several of the shops in the area. It made me again think back to my time living in Paris, but I had to get to the airport. 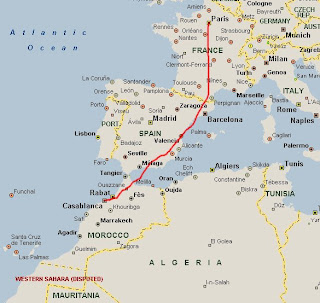 My flight to Casablanca, Morocco was just as I like; uneventful. The flight took me over the Mediterranean Sea and then the northern snowcapped mountains of Morocco, hiding the Sahara Desert behind them.

I arrived in Casablanca well after 9 PM, which is less than ideal as I like to see new cities for the first time in daylight. While it was less than ideal, it certainly isn’t the latest that I had arrived in a new city. One of my favorites was arriving in Rangoon, Myanmar around midnight. After catching a ride to town I was shown to a hotel by street children. The kids would wait for me to leave my hotel each morning.

It was nearly an hour long train ride to get from the airport to the Casablanca train station and I still had to take a cab to the center of town from there. I knew exactly where in town I wanted to go, but the driver had not heard of any of the four streets that I rattled off. I ended up telling him just to take me to the center of the city. The driver was using multiple choice lanes as most of us do, either lane A, B, C etc., but he had a new choice, D) All of the above. Lanes didn’t seem to mean anything as he drove where he deemed fit. It is actually quite common in third world countries where “rules” of the road are taken as suggestions and not very serious ones at that.

Once I finally made it downtown I was able to orient myself on the map I was using and found a crash pad for the night. It wasn’t much of a hotel and didn’t have a shower, but I only needed a room in which to sleep. I also didn’t have to worry about storing a bag as I only had my book bag, which was largely empty as I had left most of my things in Paris.

I decided to amble around and see what I could find in Casablanca on my first night in Morocco. I’m not sure what I found, but it didn’t take long for touts to find me. I had several offers for guide services, companionship and drugs. I passed on the lot and found a place to grab a late night bite for dinner. It seemed that pizza was on offer in just about every dining venue. As it was so prevalent I figured I would pass on the couscous and see what the pizza was all about. In my travels I generally sample what other countries offer as their version of pizza, as most countries have their own version. Oddly enough, one of the best pizzas I have ever eaten on the planet was in Nepal.

I found Morocco intriguing in all the outside influence. The country has several Spanish enclaves, yet French is the main language outside of Arabic. Almost no English is spoken and it wasn’t easy to tell who might be a local, though at the late hour it was pretty much everyone. I had an early morning planned and was trying to break from my European sleep schedule, so I turned in after my late night snack.
Posted by Kevin Knieling at 7:12 PM