Ben and I weren’t in any particular hurry to get moving as the standard time to make it to the first nights hut was five or six hours. Generally when being quoted time for hiking or climbing, there is a large buffer built in so the time we started out didn’t really concern us. When we finally did begin making our way out of town around ten there was a light rain. Of all the things I was interested in, rain was not on the list. Also, it would be very important for Ben and me to stay dry as we didn’t have all the proper winter gear. There was a limit as to what we could rent in Imlil.

As we were leaving in the morning, Mohammed’s son walked with us out of the village to initially show us the way. We had no trouble navigating our way out of town, but when we arrived at a large scree field where we really could have used some guidance, he pointed vaguely and said, “Go that way” with a most general wave of his hand. 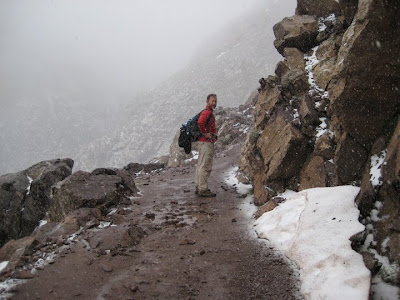 While we weren’t on anything that even remotely looked like a trail as we set off we did eventually find the path. There was another town further up the mountain so there were a few local folks heading in that direction giving us an inkling as to where we needed to go. We were even able to trail a local fellow who showed us a few shortcuts that knocked off some of the switchbacks on the trail. While the weather was less than ideal the rain turned into snow, which was preferable.

As we passed the last village we lost our friend showing us the shortcuts and were summoned by two locals who tried to sell us everything under the sun, or snow for that matter. They claimed it would be at least another four hours to the hut and we should buy all sorts of provisions. We didn’t fall for it. 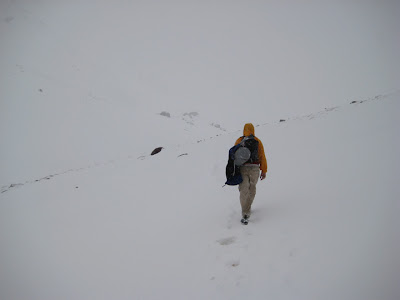 As snow continued to fall our path disappeared. Ben and I discussed the situation and talked about various scenarios. While we didn’t necessarily have all the gear that we might have wanted we did have experience on our side. In the big picture we knew that for the final run up to the hut we had to follow a valley upwards. We were initially told that we would be able to see the hut up the valley at least 45 minutes before we reach it. With the blowing snow we could barely see 40 feet ahead, much less up a mountain. We were able to piece together the trail using visual clues in the snow and how the mountains were laid out. We were able to see the hut exactly four minutes before we reached it.

As Ben and I walked in the hut I laughed as it was a scene straight out of a movie where the wind was whistling, swirling snow followed us in and I had to use my shoulder to close the door behind us. The hut was far more than I had expected. It was a building big enough to sleep 70 people in six communal dorm rooms. The only drawback was the dire lack of heat. I understand that wood is a scarce commodity above the tree line, but had I known I might have brought a few logs along for a bit of warmth.

Ben and I were the only ones in the hut with the exception of the two caretakers, so we again had ample free time from our arrival at 2:00 onward. We had some tea and did our best to keep warm. I was almost certain that it was warmer outside than in, other than for the lack of wind blowing inside.

Ben and I wouldn’t be the sole guests for the evening as a French Canadian couple made an appearance as did a mixed group of a dozen or so Moroccans & French. 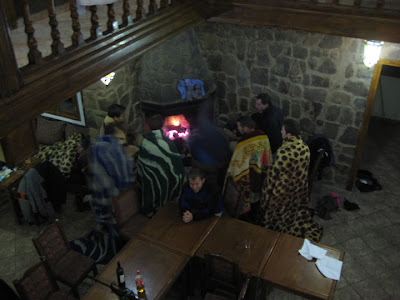 In the late afternoon, the caretakers did start a small fire, but the amount of heat it produced was lost in the large room. Nearly all of the occupants of the hut were jockeying for position around the meager fire, with the remaining few wrapped in blankets.

As meals were included for our nights stay we were given the dinner option of spaghetti or spaghetti. I was hoping for something more Moroccan, but I estimate that it was difficult to beat the cost effectiveness of pasta. As everything has to be carried up to the hut, it is also rather compact and doesn’t readily spoil. Dinner was however a social affair where I had the opportunity to speak with everyone else. It was a rather diverse group, which I found to be quite common in meeting people when I travel. I found the French expats living in Morocco the most interesting as they were able to give me insight to the business environment of the various cities in Morocco, which, for the most part are limited Casablanca and Rabat.

It had been snowing since Ben and I were underway earlier in the day and it appeared that the snow had no intention of relenting. With that, Ben and I formulated our plan for the morning. While initially we wanted to get an absurdly early start so that we could make it back to Marrakech by nightfall, the snow forced us to change our plan. We were the least equipped out of the lot, so we figured we would follow one of the other teams going up so that we could follow their tracks and not have to cut new trail through a foot of snow. It grows rather tiring trudging through powdery snow, especially while wearing crampons.

As the evening grew long, people began to filter into their rooms and off to sleep.
Posted by Kevin Knieling at 7:11 PM