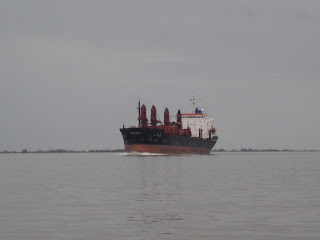 There was a smattering of fireworks throughout the night, with the expected concentration just after midnight. My watch read five past 12 when I looked and I did little more than acknowledge the New Year before drifting back off to sleep.

The morning was warm and dry, which makes it so much easier to pack everything up. As we set off the river was calm; still enough to show reflections on the surface. Blue sky however was a rare commodity, with it being nonexistent in the three compass quadrants to the south and west.

By mid morning the wind picked up to about 15 miles per hour. I am sure I don’t have to mention that the wind was blowing in the exact direction that we didn’t want it to. 15 miles per hour isn’t all that bad, but it was enough to slow us down. If you would like an idea of what a steady 15 miles per hour wind is like, stick your head out of your car window while you are driving at that speed. Better yet, do it while someone else is driving.

The landscape was becoming flatter, if that was possible. Along one side of the river I could see telephone poles down the entire right side. I counted as high as 60 until the river turned ever so slightly away from my line of vision and the remaining telephone poles appeared as a clump.

The morning saw quite a bit of large ship traffic. We have been more diligent in checking behind us for ships and in one instance noticed a ship behind us, causing us to slide further to the edge of the river. As we turned around a few minutes later, the ship was far closer to us than we would have cared for. We thought we allocated sufficient space to the ship, but apparently not. We could have thrown a rock and hit this hulking cargo ship. As I had mentioned previously, the large ships generally create a rolling wake, so other than bobbing up and down, it wasn’t an issue. Getting sucked into a 20 foot propeller would be. 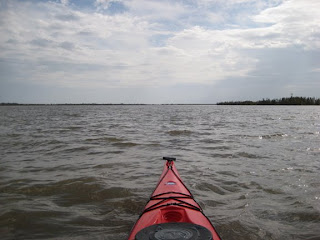 The day grew brighter though the sun remained elusive. We had to contend with only a brief bout rain but it wasn’t going to be the last time we saw rain for the day.

As we paddled along we passed some fantastically named towns: Happy Jack, Promised Land, Port Sulphur and Waterproof. Port Sulphur I get as it used to be a company town for Freeport Sulphur Co., but the others must have been either picked out of a hat or named by some bar patrons at the end of a long night.

Our goal for the day was to reach the town of Venice, LA. Venice is the southernmost town that is accessible by car and a place where we could stop for some food and water. The town of Venice was mostly destroyed in Hurricane Katrina, but as it is a base for workers and services for the oil rigs in the Gulf of Mexico, the town has been at least somewhat rebuilt. The most important point of note for us is that the town lies exactly 10 miles from the southern terminus of the Mississippi River at Head of Passes. For us though that is not yet the end of the trip, as the actual Gulf of Mexico doesn’t begin until 15 miles beyond that.

Kobie and I skipped lunch to push on and do all we could to make the town of Venice by nightfall. Also, were we to stop for lunch it probably would have begun raining again as soon as we got out of our kayaks. Quite oddly, there was a several hour stretch where we didn’t see a single ship on the river and only one lonely tug. We figured that at some point when we needed to cross the river all the traffic would come barreling past. There was a significant amount of helicopter traffic though, shuttling people back and forth to the oil platforms. 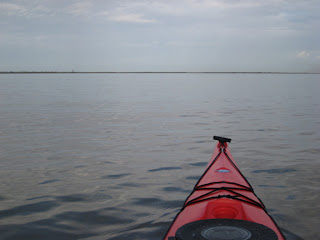 I felt as if we were nearing the ocean. There was very little in the way of trees, nothing on the horizon and there was a smell of salt air. As we were rounding the last bend before a several mile straightaway leading to the town of Venice, there was Fort Jackson. I’ve made several mentions of Andrew Jackson on this trip and Fort Jackson is cause for another. The fort is in his namesake as it was he who in the Battle of New Orleans (defeating the British) learned the strategic necessity of fortifying the mouth of the Mississippi River. In the 10 years leading up to 1832 Fort Jackson was constructed. The fort was later used in the Civil War and as a training ground for World War I.

On the final straightaway Kobie and I noticed a pick up truck pull to the side of the river. Two kids got out and began firing guns into the Mississippi. One kid had a handgun and the other a shotgun. It seemed that they were taking target practice into the river. One guy would throw up a bottle and the other would try and blow it to bits. Apparently this is legal in Louisiana. Have you guys heard of a firing range? Hello? It made the two of us nervous to the point of paddling much further out in the middle of the river. At least they didn’t shoot in our direction as we were passing.

We paddled into Venice harbor at dusk and as it was entirely for commercial activity, decided that there was nothing for us there. There was heavy traffic in the small marina opening and we were just in the way. We didn’t really need food & water as we still had a small supply and were hoping to wrap the trip up the following day.

We paddled a bit further past the town and set up camp on a very small patch of land amidst the swamp. As soon as we got on land we were instantaneously set upon by small biting insects, possibly beach fleas. At the same time it began to rain. I didn’t know what to do first, put on long pants or get my tent set up. I erected my tent to the point that rain wouldn’t soak the inside and then threw on pants and another shirt while I was at it. I still had dozens of mosquito bites on my ankles from sitting outside the other night causing me enough grief.

There was a fair amount of boat traffic, mostly pleasure fisherman coming home so we did get a few odd looks in the waning sunlight. We had been sitting our kayaks for ten and a half hours and had a poor campsite, but as usual we made do. As I was mostly out of food I had to cook some rice for dinner. It was the first time I cooked a meal in several weeks. On the entire trip I didn’t use the contents of a 200 gram container of isobutene fuel to cook. My lack of interest in cooking is a holdover from living in NYC. Perhaps it’s not the cooking so much but the cleaning up afterwards.
Posted by Kevin Knieling at 12:44 PM