I wasn’t surprised that fog covered the river in the morning. The sky seemed as if it would cut us a break in the way of thunderstorms, at least for the time being, but our visibility was quite limited. We jumped in our kayaks and paddled the short distance to the confluence of the Mississippi river and waited for the fog to clear. Then we waited some more, paddling nearly continuously as if on some aqua tread mill, maintaining a stationary position relative to the land.

The density of fog varied, but it wasn’t by any stretch of the imagination clear. We waited and waited some more, but I had no real hope of the fog clearing to the point of allowing enough visibility to see any great distance. We listened for other boats and could hear several. The bigger problem was that those large ocean going ships are silent as they leave little wake and engine noise is minimal. What surprised me was that there were pleasure fisherman out, as one cut close to the buoy where we were waiting. While I was surprised I hoped that a fishing boat with radar would escort us across the southwest pass. It didn’t pan out.

We could have potentially waited all day for the fog to clear. As a last ditch effort we waited until we didn’t hear boat traffic and I put out a general broadcast on the emergency marine radio channel: “Attention all mariners in the immediate vicinity of the southwest pass and the confluence of the Mississippi River. For the next several minutes there will be two non-motorized watercraft crossing the southwest pass from the south pass to the west bank of the Mississippi River; all mariners are urged to proceed with extreme caution.” 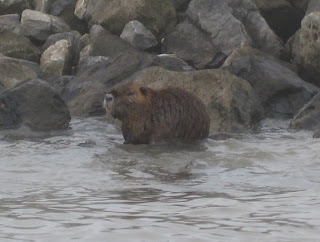 We managed to cross the to the west bank of the Mississippi river unscathed. As we took a rest on the far side we heard a ship passing in each direction behind us. We hoped the hardest part of the day was over.

There were varying levels of fog throughout the morning, though make no mistake it was constant. We saw very little in the way of boat traffic late morning, until all at once we saw probably a dozen at one time. I could only guess that the fog warning had been lifted and the boats left Venice Marina in an exodus.

We approached Venice where fog hung heavy in the hectic harbor. The harbor was rife with activity and at no other point in the trip did I feel this “in the way”. Kobie and I found a small beach that we paddled over to, taking our last paddle strokes for this trip. We exited our kayaks and with a hand shake officially called an end to our kayak trip.

Venice is a commercial town and only the basics seemed to have been rebuilt after Hurricane Katrina. We walked through a parking lot and down the road where we knew a marina to be. It would have been easier to paddle there but we had enough fog over the past week. We walked through a business parking lot and out to the road to look for a celebratory drink. While the marina was further than we thought, there was a little seafood stand where I asked a patron for directions. As the road to the marina was being redone and narrow, we were offered a lift, being able to put our kayaks in the back of his pickup.

The pickup truck was fairly new, but especially beat up. When the fellow tore out of the parking lot with two guys and two kayaks precariously perched in the truck I had a feeling I knew why his truck appeared as it did. Kobie and I did our best to hang on and keep the kayaks from sliding off the side of the truck. We thought the guy might take it easy, but perhaps this was easy for him. Either way, we were once again grateful for the ride.

At the marina we were able to set out our kayaks and begin cleaning them out, after stopping at the marina store to pick up our celebratory beers of course. We met a rather colorful fellow as we were cleaning out the kayaks. Following our explanation as to what we had just done he responded that “there isn’t enough room in those kayaks to fit enough dope for me to paddle that far”. If he says so.

We spoke to another local who mentioned that he had a hunting/fishing camp south of Venice; actually he and his friends have had five since 2001, all having been destroyed in various storms. They keep replacing the camps and will continue to do so we were told.

The last of our encounters was with a couple of fisherman who have a friend that put together outdoor stories for a local print publication. They took a few photos of Kobie and I with our kayaks and as we have always done on the trip, asked for them to e-mail us the pictures. In the eight or ten times people have taken photos of Kobie and I on the trip, exactly zero, yes zero, have e-mailed us photos.

Ken turned up before we finished our first celebratory cocktail. As Ken arrived he commented about the area by saying, Wow, this is the ass end of nowhere”. When a guy from Louisiana says it, it means something. I have no idea what we would have done were it not for Ken driving the four hours to come collect Kobie and I. In trips such as this the beginning and the end are the most difficult; the end more so than the beginning in this instance. The three of us sat looking at the water enjoying our beverages as Kobie and I regaled Ken with the minutiae of the final days of our trip. We got the kayaks on the roof of Ken’s car and we were off to Lafayette, LA for a few days.

While Lafayette was northwest of where we were, we first had to drive north, then west as there were no roads through the swamp. It gave Kobie and me a chance to see our route from the land up to New Orleans then further to Baton Rouge, before heading away from the river. We got a kick out of driving over all the bridges under which we had paddled. Things looked much smaller from atop a bridge then from on the river itself.
Posted by Kevin Knieling at 12:54 PM