We had achieved our overriding goal but there was still the matter of retracing our route 25 miles back to the town of Venice, where my buddy Ken would be picking us up. South of Venice there was little more than wetlands and reeds, so unless Ken had a boat, we would have to meet him in Venice.

It was strange to flip my maps around the opposite direction and look at them the other way as we paddled north, albeit much slower. The current of the river wasn’t as bad as we have seen and we managed a speed similar to that of the Red River at the start of our tip, in the vicinity of 2.5 miles per hour. We had gone slower in the other direction at times. 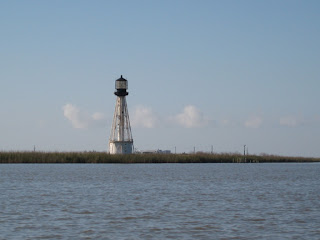 We made a stop at the lighthouse on the way back north and it seemed as if the door was open. I decided to paddle through a bit of marsh and shallow mud to get to the base of the lighthouse and check things out. I went inside and found the lighthouse in sorry state. Years of neglect led to decay. Wood was completely rotted in sections of the wall, but the stairs were iron and though rusted in spots seemed sturdy. I figured it would be safe enough to climb up to have a look at the area through which we were paddling. I have said once before that sitting in a kayak I sometimes feel like a dog wondering what is on the kitchen table. I know there is something there, but what? Sitting in the kayak I can’t see more than a few feet off the ground if the object is close by and hidden in the underbrush. The view from the lighthouse confirmed what we had seen from the river; there was pretty much nothing there.

It was nice to paddle back, at least at first as we recanted tales from earlier parts of the trip. We also talked about what we would be doing when we returned back to civilization and how nice it would be to have a steak. 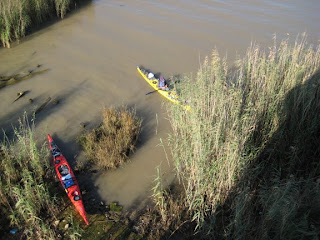 Just past the lighthouse is an area known as Camp Eads. The camp is rudimentary housing for hunters or fisherman that stay in the area. Kobie and I paddled in to see if anyone was heading to Venice, but as it was Friday they all had just arrived at the camp.

We grew weary as we paddled north. The current wasn’t running particularly hard and we knew it was only 25 miles, not the 500 we had to paddle against the current up north, so we pushed on. I was thinking how nice it would be to have the father & son fishing team come back for us. We would be back in Venice by late afternoon and sitting at a bar shortly thereafter, celebrating our four month journey. As the day wore on we were losing hope. Late in the afternoon another boat come by and said they had spoken with the father and son, who told these folks about us. These folks mentioned that the father and son were planning to come get us once they were done fishing, though they might stay out until dark. At least we knew they were still out on the water.

As with the rest of our day, during the critical moments, the fog laid low on the water, significantly truncating visibility. There would be no part of the end of this trip that would be easy. In the foggy dusk both Kobie and I used our headlamps as strobe lights alerting any boat traffic of our whereabouts. The range of visibility for the strobes wasn’t great, but was still better than nothing. We hoped that even if the father and son didn’t find us, no one would run into us. Visibility was absolutely minimal, possibly no more than 15 feet at times. We heard one or two bots pass, so we made noise and shined our lights in the direction we heard the boat motors. Whether the father & son fishing team came looking for us or not I don’t know, but I do know they sure didn’t find us. 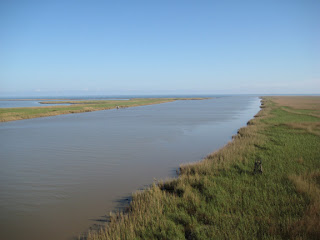 By the time dark rolled around we had several problems. One of my more pressing concerns was that the foul weather, described on the weather radio as including everything shy of locusts would be rolling in the following morning. For that reason, we wanted to make as much northbound progress as possible. Another issue was that even if we wanted to camp, there was no earth upon which we could set our tents. We were paddling through marsh and with nary a bit of solid ground. We were surrounded by reeds. The fog is obviously a problem as it prevents us from seeing where we are going, but it also prevents boats from seeing us. While boats could smash into us, it was the commercial boats that passed nearby that didn’t know we were there and should reduce their speed so as not to swamp us with their wake.

We heard an oil rig transport boat approaching and as we were listening a wall off water climbed up in front of me. I had just enough time for one or two paddle strokes to get me up and over the wave. I looked back and couldn’t even see Kobie until the front of his kayak punched over the wave at an awkward angle. I yelled for him to paddle as the outcome would not have been pleasant should he not make it over the wave. There were several other waves behind the first, but none as bad. My heart was racing after the encounter. We were in a bad situation. So much so that I thought about lobbing a call to the Coast Guard to see if there was perhaps a patrol boat in the area. We had no safe haven, not even the banks of the river. We could do nothing but paddle on, navigating by GPS.

An emergency broadcast came over the marine radio that the emergency beacon sounded for a 90 foot ship. It didn’t bode well for us if 90 foot boats were having problems.

At one point the fog cleared and we could see the marker lights on the river. Visibility shot up to half a mile. There was also a hint of moon light, giving us enough in the way of assistance. It was almost pleasant at that point. If the conditions remained as they were, we could even paddle back to Venice that night, although we would arrive in the wee hours of the morning. I just wanted to beat the incoming weather. I am not a fan of lightning while out on the open water.

The break in the fog wouldn’t last very long forcing us to navigate by GPS once again. We managed to cross to the other side of the river before we approached Head of Passes and the confluence of the Mississippi River.

Just before entering the Mississippi we came across a small bit of solid land that would allow us to get our tents on solid ground. We were just shy of Head of Passes and were even able to see across the southwest pass, something I hoped would remain constant until the morning when we would need to paddle across it. 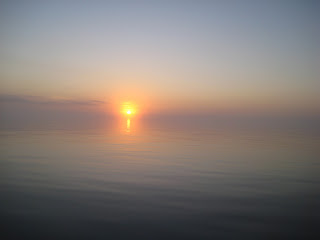 I also hoped that the thunderstorms that were forecast for tomorrow would hold out long enough for us to paddle the remaining 12 miles back to Venice.

I had a couple of granola bars for dinner while Kobie cooked up some noodles using the river water. I was just looking forward to wrap us the last little stretch of the trip. I called Ken several times to try and coordinate our completion of the trip with him and very fortunately for us, he has an understanding wife and boss (those are two different people…I think).
Posted by Kevin Knieling at 8:51 PM