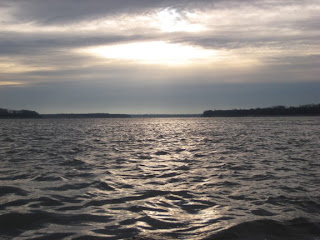 I woke to the sound of a satanic laugh amplified. It took a minute to figure out that it was a barge giving us a very unnecessary wake up call at 5:30 over its loudspeaker. For those of you who played video games in the 80’s, the laugh was akin to that off Sinistar. As I hadn’t collected the requisite number of crystals I was unable to destroy Sinistar though.

As we were awake we decided to get cracking so as to give us the best chance to make Memphis by Sunday night. We were on the river before the sun rose above the horizon and were immediately thrown to the wolves. We hit a head wind straight on. The forecast was for wind in the 15 to 20 mile per hour range, but the forecaster was a little low on his estimate. There were times where we were poking along at just above two miles per hour in the wind. These are speeds that would have frustrated me paddling against the current on the Red River, never mind with the current on the Mississippi.

We made it around a bend and held the wind at bay having to paddle west for a few miles. It wasn’t long though before the river turned south and we were once again getting slammed. The straight away we were paddling was over ten miles in length and every mile we paddled a battle. Ten miles was a long runway for the wind to gather steam.

We thought that we might be able to run on the other side of the river and be somewhat out of the brunt of the wind, but it was of no use. While the side of the river was partially sheltered, there was an eddy shoving us backwards. If it wasn’t the wind pushing us back it was the water.

Crossing back through the channel I was more concerned about my safety than on Lake Pepin with 55 mile per hour winds. Here, the wind seemed quite adept at spinning my kayak in directions that I didn’t want to go. Not only that, but the channel had some good waves running through it. In one instance the nose of my kayak rode up one wave and when it crashed down punched through the next, leaving the wave to slam me straight in the chest. It made absolutely no sense to clear out the water that was pooling on my spray skirt being that as soon as I did, another wave would deposit several more liters there. I had more waves in my lap than Santa Claus has kids on his the week before Christmas. 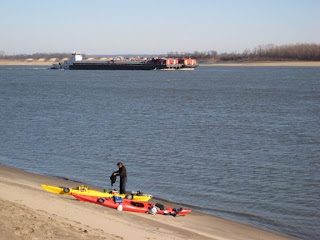 It was one of those days where it was important to stay dry as there was little sun and once wet the wind saps heat at an unbelievable rate. It just wasn’t possible to stay dry. Water worked its way through any little gap it could find, leaving me able to wring out my shorts.
I was trying to decide which was aching more, my right shoulder or the ring finger on my left hand. It was almost pointless to paddle in the wind as even in the few hours of remaining daylight we would barely make any distance. The only solace was that it became sunnier as the day wore on.

I have been using the same ziplock bags as gloves for the last month as I can’t find anything that keeps my hands drier. When I stopped at one point to flip over the map page a “glove” blew into the water. As I reached to grab the glove the map case too was blown in. I learned my lesson from the first marine radio that went for a swim so I had the map case lashed on to my kayak, but it did get a dunking. While the case dipped into the water, at least I didn’t lose it. I was also able to learn that the new maps are in no way waterproof, water resistant or in any other way treated so that they don’t turn into a pile of mush when wet. Fortunately I only had the maps up until Memphis in the case and they are marginally legible. 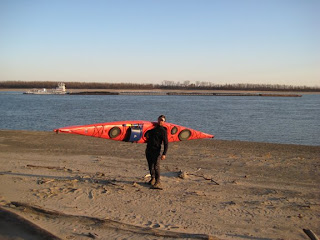 We pulled onto the sandy portion of a wing dam and discussed what we should do. We got out of the kayaks as we were going to have lunch, but as we climbed the rocks of the wing dam and looked down river, we still had about 7 miles of misery in the direction of the wind in front of us before the river turned and would give us a respite from that wind. It was nearly as bad as a head wind I had on my 2005 bike ride, where even in my lowest gear I was struggling to pedal…downhill.

We made the decision to end the day as we could paddle the distance we would cover in the entire afternoon in an hour, should the wind drop. It just wasn’t worth the punishment. We found a good place to camp in an area of trees and as we had lunch and began unpacking, the wind seemed to drop. It was just then that Kobie discovered four inches of water in the back hatch of his kayak. The cable for his rudder broke loose leaving a quarter inch hole to let water in his boat. While all of his gear was in dry bags, they all failed in varying levels. It would have been a particularly bad evening had we paddled on and Kobie discovered the water in this kayak at dusk when we usually finish. 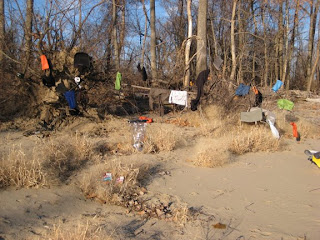 It was a beautiful day once out of the wind. We even had a deer sneak into camp and probably startled us as much as it was startled by us. It wasn’t a bad thing that we had the opportunity to take everything out of our kayaks and dry it. We hung all our gear on trees like Christmas ornaments (to keep the Christmas theme going). While Kobie’s gear was wet from river water, my problem is with condensation. While it is normal to have condensation in the cockpit, it also affects my day hatch, just behind the cockpit. I also figured out why the right side of my shorts was generally wetter than the left. My skeg lever had come loose, so that water would seep in though the screw opening.

We were treated to another worthwhile sunset and had a splendid fire. It was nice not to have to scramble in the dark to collect firewood. I sat by the fire and sorted though all the new maps and stored them in a dry bag that I knew would do the job. The Corp of Engineers, doing what they do best included several duplicate map pages. At least they didn’t leave any pages out.
Posted by Kevin Knieling at 11:30 PM