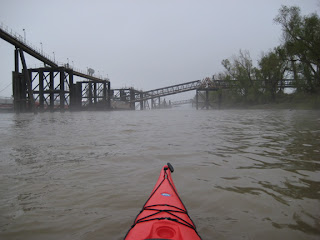 Like a child waiting to open presents on Christmas morning, I just couldn’t sleep. It might have been the barge traffic, but I was up. It could also have been the interest in getting to Baton Rouge. As it turned out, we were exactly 1.5 miles from the bridge.

As we approached the city the smell of petroleum and petroleum products filled the air. In the 50’s and 60’s the area experienced a boom in petrochemicals which is quite evident while paddling the river.

As it turned out, we would have a white Christmas! It wasn’t the traditional white Christmas, but rather one enshrouded in fog. While the morning started out fine, the fog worked its way in, truncating our field of vision.

It was Christmas and I thought that perhaps barge traffic might be a little lighter, but it wasn’t. One of the ships in the river was the first ocean going vessel I have seen on the Mississippi so I knew we had to be getting close. Baton Rouge is the farthest inland city that deep water ocean going vessels can reach as the Interstate 10 bridge doesn’t allow progress further north in that its clearance in height prevents it. 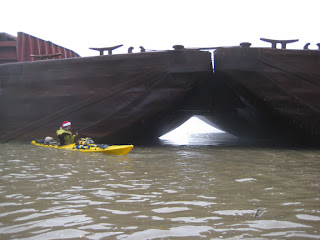 On the clogged sides of the river where there weren’t loading areas for barges, there were barges themselves stored on the side of the river, lining the bank. The line stretched down the river, but there was generally space behind the barges of 30 or 40 feet where Kobie and I could paddle. It kept us out of traffic on the river where visibility was decreasing by the minute.

We followed along the wall of barges, but at one point got cut off by a barge that touched the bank. The barge there was lashed together three containers wide, but as luck would have it the curved front section of the barges lined up showing daylight on the far end. There was an odd current running through, but we were able to use our hands along the side of barge where we needed. It may not have been the smartest thing we had ever done, but it seemed safe enough and in any case, I am still alive to write about it. 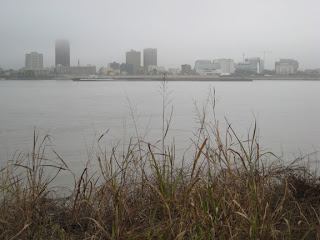 We paddled along to just shy of the second bridge through the city, Interstate 10. We were able to get out on a rocky landing at the old Port Allen Ferry Terminal. As we stopped in the park that now resides there, a police officer came over to see what we were up to. He even offered for us to leave our kayaks at the police station, but we wanted to have our kayaks with us so that we could clean them and lug our stuff to a motel. It would have been no fun having to carry the contents of the kayak without the kayak to pull it in. So we rolled on the four miles to where we knew we would find several motels.

Finding a motel wasn’t exactly straightforward as the first place wanted north of a hundred bucks a night, more than we cared to spend. I ran across the street to a Best Western and instead of going into the lobby went around the side of the building to check if there were external doors for the rooms that would allow us to get our kayaks in. Before I got very far a woman came out yelling at me that I need to leave the property as I am trespassing. I said that I just wanted to look at the property as we were considering staying there but she then threatened to call the police. Little did she know I already had the police on my side. Again I was told to leave or I would be spending the night in the Port Allen jail. I no longer wondered why the parking lot was empty, but I wasn’t able to find out where she did her receptionist training. 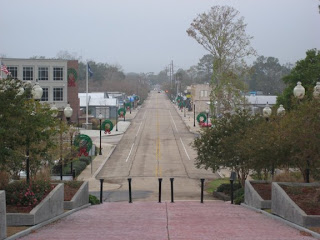 Finally, the third time was the charm. Well, we had to settle for it as they didn’t have any internet access or laundry facilities. We also learned that everything in the area other than the gas station was closed; that included that Wal-Mart.

Just after checking in my phone rang. It was Ken. He again said that he would pick us up for Christmas and bring us to Lafayette for some home cooking and a family Christmas. Today we had a road and were fired up. I would get to see Ken and his family as well as chow down on some Gumbo. It was great to be in a family atmosphere for Christmas. I missed last Christmas with my family as I was in Los Angeles. The year prior I flew home on Christmas Eve from India and a year further back I spent Christmas in the Cook Islands.

It was great to see Ken’s mom as I spent a good deal of time at her home growing up in Long Island. I also hadn’t seen Ken's kids since pedaling my bike through the area back in April of this year. It was murder on my shoulders picking up his 40 pound daughter and lifting her to the ceiling, but I can’t resist. I always thought I would be “bad cop” had I any children, but I am not so sure. I am getting soft.

Christmas was just as it should be, celebrated outside and in shorts. I ended speaking weather with some of the folks there and they mentioned the snow they just had. Apparently it was only the third time there has been any accumulating snow in Lafayette in my lifetime; that last in 1988 and 1973 before that.

Our fun had to end eventually and Ken drove Kobie and I back to our motel. What a great interlude from our time paddling. It was a great way to recharge both in the time off from paddling, but also from a psychological perspective.
Posted by Kevin Knieling at 1:40 PM