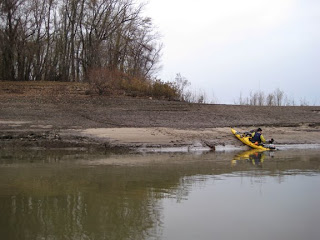 It’s hard to believe that it is already the month of December. Some moments this trip seems as if it began yesterday and other times a year ago. The trip is different than others as I have Kobie as a partner in crime. Well, that and that it is taking place on water.

I normally wouldn’t sleep with earplugs in while in the woods, but as we were on an isolated island I wore them so as to not hear the many barges pass in the middle of the night. Waking up though, it doesn’t give me the full picture of the morning as I can’t hear what is happening; whether it is rain falling on the tent or as in the case today, wind stirring the tree branches.

When removing the ear plugs and hearing the wind I was somewhat dreading getting out of the tent, but the morning was mild. At this point I think any day where I don’t start wearing gloves while breaking down camp is a winner.

Getting away from Island 58 as it is named was a chore. At least we had gravity to assist us in making our way down the steep muddy bank we had to clamber up carrying two kayaks last night. The kayaks essentially slid down the bank themselves. Were we not hanging on to the kayaks we may well have had to swim after them.

Our pace was unchanged from the previous night, cruising in the seven mile per hour range to start the overcast morning on calm water. The initial goal for the morning was the city of Cairo, IL. Cairo was another company town formed by the Cairo City and Canal Company in 1837. Its strategic location at the confluence of the Mississippi and Ohio Rivers is a double edged sword. While is an ideal location for commerce, the town resides behind a 60 foot levee protecting it from seasonal flooding. During the Civil War the spit of land separating the rivers was the location of Fort Defiance, a Union stronghold.

More recently the city of Cairo was a hotbed of racial violence as recently as the early 1970’s, requiring the National Guard to restore order to the city. The racial tensions are chronicled in a book entitled: Let My People Go: Cairo, Illinois.

The city of Cairo to us meant the end of the upper Mississippi River, having reached mile marker zero at the city limits. It was also were the maps I had for the river ended. It was somewhat disheartening getting on the lower Mississippi and see the mile markers back in the 900 mile range; but this is the final countdown. 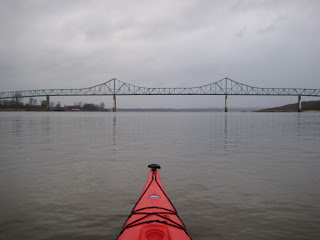 The town of Cairo would also be the last in Illinois as we would now have Kentucky on our left as we traveled down river; at least for two days anyway as only about 60 miles of Kentucky border the river. As a parting gift from the state of Illinois, we received snow. Most days snow might make me grimace, but today it made me smile. I stuck my tongue out to try and catch a few flakes. I couldn’t help but think that Christmas was right around the corner. I fully expect to be on the river for Christmas, but it will be Christmas nonetheless.

The start of the lower Mississippi River is at the point where the Ohio River joins the Mississippi and pushes the river to more than twice its previous width; more than a mile wide on average. The coffee colored water from the Mississippi clouds the clear flow from the Ohio as seen in this map.

We weren’t sure what effect the joining of the rivers would have on the rate of flow, but were hoping for the best. Our hopes were dashed as our speed was cut exactly in half. While there was an increase in the amount of water flowing, the river widened to a point that could handle all the water and them some.

As it was yet another day of undesirable conditions to sit and have a leisurely lunch, we stopped on the sandy section of a wing dam for a quick bite. I am a big fan of stopping for lunch at places where people generally don’t go, as the chances of finding something interesting or unique are much better. Today, along with old cans rubbed clean of their paint so that they were entirely silver, giving no hint as to what beverage it once contained, there were fossils in the boulders used to create the wing dam. I would have taken a photo were my fingers not nearly numb. I simply wanted to eat as quickly as possible and get back in my boat.

The flow did increase as we paddled further form the confluence of the Mississippi and Ohio rivers. The current is highly variable though, being mainly a function of the river width. As the river narrows, the same amount of water must crowd its way though. Also with the river being much wider we have to choose a route through it. The decision is between taking the longer route and staying in the channel with a better current, or a shorter more direct route with dead water.

We paddled through a barge staging area in the afternoon where dozens of barges lined both sides of the river. I assume it is where the barges from down south are broken down and sorted only to be reassembled and pushed further north in smaller barge sizes in the narrower water.

The last hour of the day was the roughest, both in terms of conditions as well as physically. The west wind had picked up and was drilling us, severely impeding progress. Three months paddling has taken its toll on me as I have a periodic sharp pain in my shoulder; the two herniated disks in my neck are acting up again and the tendonitis in my fingers is at a point that doesn’t allow me to bend my fingers in the morning before stretching them out. The only solution is to paddle on and when I have reached the Gulf, rest. And plan the next trip of course.

Camping spots have gotten more difficult to find on the Mississippi and today was no exception. We were running out of daylight and beached the kayaks in hopes of being able to get into an area of trees. The trees weren’t an option, but we found a clear patch of sand that was somewhat sheltered but not even remotely level. As we weren’t about to get back in our kayaks and paddle on, we decided to use our paddles for another purpose: shovels. We leveled a patch of sand big enough to pitch my tent. It took some work, but it warmed me after the last cold hour paddling.

It took some work to get a fire going, but we managed. It was fantastic to be able to dry our gear by the fire. It is never pleasant to put on wet things first thing in the morning, especially when it is forecast to be below freezing.

We sat by the fire and roasted some sausages as well as my socks. I was trying to dry a pair of socks and paid somewhat less attention then I should have. By the end of this trip I probably won’t have a single article of clothing without burn holes. As were we were enjoying the warmth of the fire though and possibly why I have a sock with a giant hole, I looked up and noticed that the clouds had cleared, allowing millions of stars to shine. As there was very little light pollution, the stars were bright and crisp in the bight sky.
Posted by Kevin Knieling at 9:01 PM