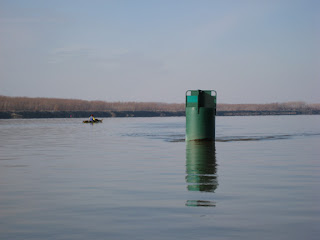 Kobie suggested that it might have been our coldest night yet and given that we were camped on what was in essence a frozen slab of sand, I didn’t necessarily disagree. Sleeping bags keep you warm by trapping heat with the lofted down insulation. That being the case, the down we lay upon isn’t able to loft and in return cannot insulate. We are using insulated inflatable sleep mats, but they just didn’t do the trick having pitched a tent on a veritable ice block.

As expected, the morning was cold, but the golden rays of the sun took some of the edge off. As we were getting into the water I slid my kayak across the sand. As I looked back I noticed a trail of red that had been scraped off my kayak by the frozen sand. It was like dragging the kayak across concrete.

A barge passed as we were entering the water and we would keep him in our sight for over two hours, paddling behind him. It was surprising that we were able to do so as we started the day at exactly half the speed that we ended the evening before. I am guessing the rain had been giving us a push yesterday.

It was a cold, windless day, but as the sun was shining it felt far warmer then the low 30’s. One thing we have to keep up on is using sun block. Even though it is cold, being in the sun all day can take its toll, especially with the sun reflecting off the water.

Barge traffic grew heavier as we entered an area of commercial activity. Among the businesses in the area was a shop that refurbished barges. The barges are winched up the bank sideways on a set of metal rails and into a shop. It seems that when the barges are repaired they are painted a rich brown so that when they rust, and they will, there won’t be much of a change.

Not only had barge traffic become more frequent, the barges have become larger still. The winner today was a tug pushing 47 barges, each about 200’ x 33’. While I know they don’t give that load to a rookie, it takes some serious skill to maneuver a barge that covers a surface area of 300,000 square feet. That’s about six football fields or seven acres moving down the river in unison. 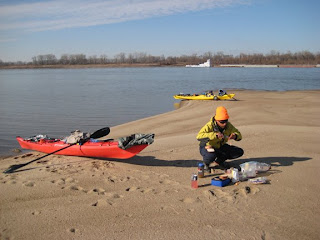 Late in the day we snuck into Arkansas. Missouri hung on for quite some time, but we were now in “The Natural State”. It is our fourth state in two days and a new state for me; number 47 actually. Left on my list are Alaska, Montana and Michigan. For Alaska I am waiting to climb Mount McKinley. Montana will most likely be a fly-fishing trip and as for Michigan I am open to suggestions.

We again had a hard time finding a place to camp. There were many options similar to last night, but we learned our lesson. We combed the banks of the river until we found a break in the revetment. We were at the end of a road, but it was just another one of those times where we were out of options. There didn’t seem to be any recent activity in the area so we set up camp and had the fire we were looking for last night. 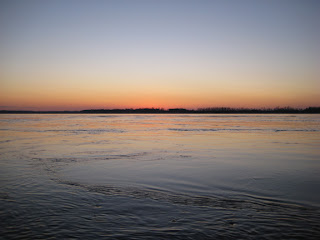 I wouldn’t need a light in my tent as the streetlamp was giving off all he light I could possibly need and then some. Were the overnight temperature not supposed to be nearing the teens, we could have gotten up in the dark to get on the river. What happened to the concept that the closer to the equator you are the warmer it becomes?
Posted by Kevin Knieling at 11:18 PM