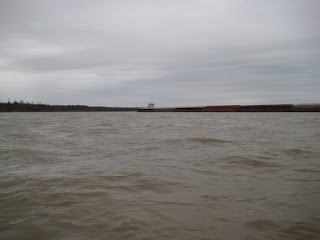 I wasn’t necessarily looking forward to getting on the river as the wind was supposed to be a continuation of the previous day, but much to my surprise the water maintained a relative level of calm.

Given my penchant for burning, melting or otherwise inadvertently damaging my clothing by fire, I decided that I just wasn’t going to wear pants anymore while paddling. If I don’t wear my shorts while paddling I can’t get them wet and hence don’t have to dry them out. I am going to paddle in my underwear. I sit in a kayak all day so no one will be any the wiser, that is if they don’t read this. I will have to find some other clothing to burn in the fire.

As we got on the water it began to drizzle. The precipitation was light, but made us grumble about what we might have in store. Fortunately for us though, the drizzle ended as quickly as it began.

The first 10 miles of the day came much quicker than I ever would have expected given the forecast of high winds from the south. We were however traveling in a westerly direction for the most part and was how we explained the phenomenon of us making that distance so quickly.

The temperature was a surprising 60 degrees by late morning. I could see the warm radiated air blurring the surface of the river as the breeze blew, much like in the desert or on pavement on a hot day. I was hoping that it would become the norm for the last 600 miles of the trip. While I am wise to the fact that colder temperatures are just a few days away I believe the worst of the low temperatures are truly behind us. I am sure we will still hit freezing temperatures, but I suspect it will be just below freezing and not in the teens.

Kobie and I spotted a lovely boat ramp to assist us in getting off the river for lunch. We unpacked our food and as soon as we did so, as if on cue, it began to rain. The rain didn’t persist and allowed us to have our lunch while remaining dry, but our lunch was further uninterrupted. What are the chances that a boat would come in to use the ramp in the 20 minutes we were sitting to eat our lunch. 100% apparently. Kobie and I had to move all of our lunch supplies off the ramp as well as our kayaks. A 14 foot fishing boat pulled up with the most unfriendly people on board, barely managing a grunt when I gave them a big “Hey, How is it going?” Akin to having a deer strapped to the hood of a car, the boat had a bear strapped on similarly. This made me think of a few things. First off, perhaps they were grumpy and in a hurry as they had taken the bear illegally. Second, Kobie and I really haven’t been taking the proper safeguards at camp if there are bear running around. It was a good reminder to keep all food sealed in the kayaks. 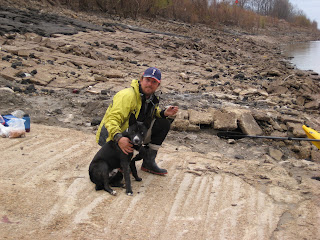 The second interruption during lunch came in the form of a dog that wandered by. At first we thought he belonged to the hunters, but as they left the dog hung around. Kobie made a new friend as even when we were back out on the river the dog chased us along the bank for over a half mile.

There was a very narrow section of river where a barge had to be helped around the bend by a small tug. There happened to be two barges coming up river as well which left us very little room to pass on the inside, so we paddled across the front of the oncoming barges. We passed in front of the barges without much difficulty, though we did move at top speed. As the barge motored passed us, it threw up the largest waves we have experienced on this trip. While the waves were shallow rollers, with no threat of them breaking into whitewater, I had a blast paddling over the six to eight foot waves the barge had created.

Throughout the day we kept waiting for the wind to blast us but it never happened. As we came around each bend we thought we would be walloped, but the wind never materialized.

Kobie and I realized that it was staying lighter later in the evening. At first it was a little confusing as to why that was happening as we haven’t yet arrived at the shortest day of the year, the Winter Solstice. When I thought about it though, in the past week we had come west across more than two lines of longitude. The distance between each line of longitude varies depending how far north or south of the equator, but we had come probably 100 miles west since Cairo, IL. It may not have been hours that we gained in sunlight, but even a few precious minutes of daylight gave us the opportunity to cover river miles.

At the end of the day another small milestone for us was picking up a new radio weather channel further south. We left the behind the station from Memphis, TN and picked up that from Jackson, MS. Not only did it give us a more accurate idea of the weather we would encounter, but it also proved that we were making southerly progress. The new broadcast had far better wind predictions in store which I was pleased about, but they hadn’t changed the prediction of rain. 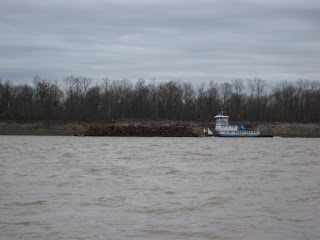 At the time we should have been thinking about a campsite, we saw on the map something labeled “Catfish Haven”. We figured we should see what it was as it could well be a campground. Of all things it turned out to be an airstrip.

I really enjoyed paddling in the waning minutes of dusk as it reminded me of warmer days paddling on the Red River several months back. The river was calm and the trees were still. I didn’t want to stop paddling.

We did find an adequate campsite. It helps that in less than 10 minutes we can level a sloping section of sand big enough to pitch a tent. In this case I was doing it in my underwear and bare feet. It felt odd being outside in bare feet and having so many insects about. It was 63 degrees at 6 o’clock. It was also the first night in many that we didn’t have a fire. At least it meant that none of my clothes would be ignited.
Posted by Kevin Knieling at 5:53 PM