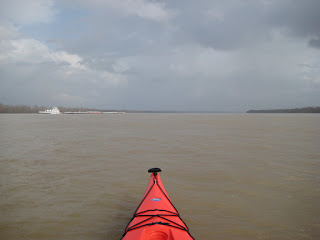 The morning was warm and with that, fog hovered on the surface of the river. At least there was little wind. That was how the day began anyway. A wind picked up, but again, we had the benefit that it swept the fog off the water. I guess we really can’t have it all. I did prefer the wind as sight is such an important sense on the river.

The temperature was up to snuff with what I hoped for down south. Given all the cold we had to deal with, it was nice to have some heat even if it wasn’t a clear day. At one stage a warm current of air rode in on the river and with the humidity, it was too much. I stripped down to my PFD and paddled along with bare arms and a Santa hat. I can only imagine what the barge captains thought. 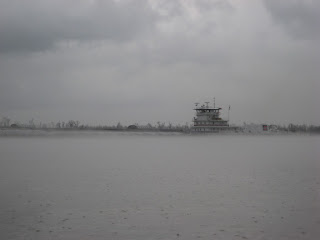 The weather was being fickle and couldn’t decide what it wanted to do. Rain gave way to sun which yielded to drizzle, only to repeat the process in various sequences. All at once though rain came lashing down; the worst we have seen on the water. I kept my head down and paddled, periodically looking over at Kobie to make sure he was still there. Translucent pearls sprung up from the river as the drops of rain punched the rivers surface; millions at a time. The rain worked its way down my rain jacket, under my spray skirt and into my lap so that before long I was sitting in a pool of water on the seat of my kayak. It wouldn’t have made any sense to stop paddling as we would have only gotten wetter had we exited our kayaks.

After the rain had stopped the river was calm and the surface of the water smooth. If only we could have more of the post rain river. It was a delight paddling along. We kept a good pace and the miles just seemed to melt away. 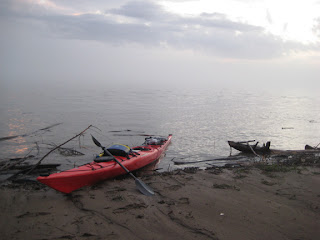 In the afternoon we paddled with a blue sky over one shoulder, but there was only a 15 minute stretch where we actually had the sun find the gap in the clouds. At that point we were actually annoyed that the sun poked out as it meant having to fish out sunglasses.

I had thought about getting to Baton Rouge by the end of the day. It would have been our longest day on the water yet, but there was a chance we could make it. I mentioned to Kobie that if we made it by days end the motel would be on me. For some reason I was hoping to wake up in a bed on Christmas morning. As the sun was setting the temperature cooled off and the fog returned to the river. As much as we might have wanted to get to town, Kobie and I have always been sensible in our decision making. As we could barely see the barges parked on the side of the river 20 feet away while there was still daylight, as soon as the sun ended its work day our visibility would have been exactly zero. We only had to make it to the first bridge north of the city, but we didn’t quite get there. 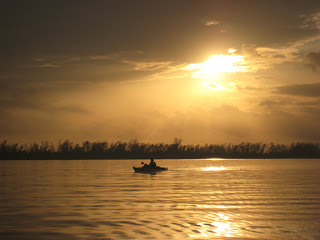 We poked along the parked barges until we came to the end of the line and found an area that we might set up camp. The spot we found was questionable, but it was just another one of those times that we were out of options. It didn’t help that it was called Devils Swamp. I leveled out a patch of sand on a ledge not 10 feet from the laving waters of the Mississippi River.

As we were setting up camp the fog lifted for a minute to reveal the bridge we had be hoping to reach. It had to be less than two miles away, but not only did we have little light left, the fog rolled back in as soon as we had a chance to see the bridge.

Sitting in my tent, I got a call from my friend Ken in Lafayette, who is going to be collecting us at the end of the trip. He wanted to pick us up and bring us back to his place for Christmas as he lived an hour away and this was the closest on our journey that we would be to his home. The only problem was that we were in Devils Swamp and nowhere near a road. As much as I appreciated the idea, it didn’t come off, leaving us in the swamp. 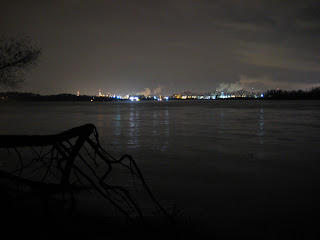 I don’t think I have ever camped so close to a capital city before and in this case it was in ear shot of many a waiting barge. One particular barge waited for over an hour with its engine rumbling before moving upriver. I felt as if I was a homeless person trying to sleep on a subway platform in New York City.
Posted by Kevin Knieling at 8:13 PM