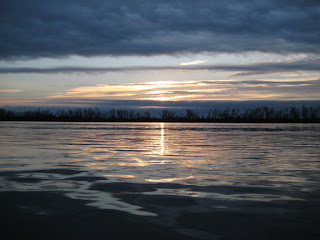 I woke up to a cloudy gray morning, but the sky quickly cleared and was a glorious shade of blue. There was also a strange yellow ball of fire in the sky that I think might have been the sun. I haven’t seen it in so long I forget.

It was a beautiful sunny day with only enough wind to ripple the surface of the water. The current wasn’t flowing as strongly as it had been, but I wasn’t about to start complaining. The main river channel has gone from nine feet deep to 45, so there isn’t quite the same flow. I thought about the 45 foot depth and contemplated if I should perhaps be a bit more cautions on the river. As I reflected upon it, it really doesn’t matter if the depth is nine feet, 45 feet or 145 feet as in any case I wouldn’t be able to stand should I fall in. 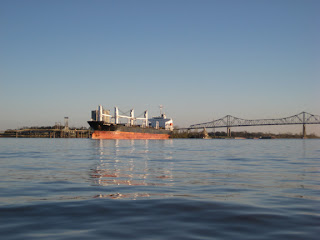 I broke out my visor, sunglasses and sunscreen; the first time in far too long. It was warm, it was sunny, there was little wind, we were close to the end of the trip and we just loving it. Kobie and I chatted away the entire morning. Among other things, we talked about the movie Fargo that we watched yesterday and how we would launder the million dollars that one of the characters had obtained illicitly. As I had worked in Anti Money Laundering on one of my compliance gigs on Wall Street I had a few ideas.

At noon we heard what sounded like the largest doorbell alarm in the world. We were paddling through a massive industrial complex that spanned both sides of the river. There were loudspeakers along a several mile stretch of the river where sound was piped and it wasn’t quite in unison. Better still was a voice coming over a loudspeaker that echoed across the river as if it were God speaking to us: “This is a test of the emergency warning system”. After the announcement there were a series of attention grabbing tones sounding as if the world was coming to an end; sirens wailing and horns blowing. I think it may have been the same sound used in some movie signaling that Earth was being invaded. Kobie and I looked askance at one another and found our own quiet amusement in the cacophony. 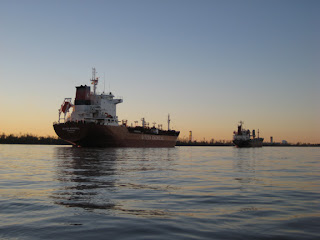 By lunchtime we had knocked off 30 river miles and stopped on a bank with a steep muddy drop off. As Kobie stood up and was getting out of his kayak, the boat slipped backwards while he tried to jump forward, resulting in him standing up to his waist in the river. He couldn’t have chosen a better day to step in. Most of his stuff was dry by the time we finished our lunch. Also during lunch I rang a shipping company to see what it would run to ship our kayaks from New Orleans to New York. The answer: a thousand bucks. Surely they must be joking.

On the river we have seen far more ocean going ships. The ships origins span the globe including: Panama, Denmark, Liberia and even Singapore. Kobie could have caught a ride back home with the Singaporean ship. There would have even been plenty of room for his kayak. 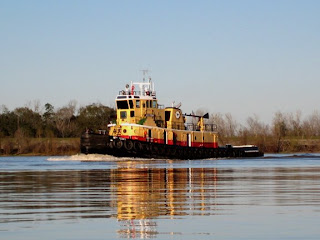 The smaller tugs that are shuffling all over have been quite courteous. While they do come closer to us than larger barges, they have all to this point slowed down as they approached. One fellow even came out of the cabin to ask where we were headed.

It was slim pickings as to where we could camp. There are roads on both sides of the river with little in the way of an area in between to pitch a tent. We did however find a spot where the road turned away from the river ever so slightly allowing a small patch of trees to grow. To make the spot more inviting the shore was covered in white shells. We had a small campfire, more to keep the mosquitos away than for warmth, but it was supposed to get down in the mid 30’s overnight. I didn’t care if it got down to five as long as the day was warm, sunny and had a decided lack of wind. 180 miles to go.
Posted by Kevin Knieling at 11:53 AM