Sticking With the Theme 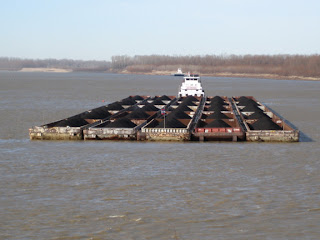 There was heavy wind blowing overnight, but
one of the reasons we chose the campsite we did
was that there was a four foot wall to back up against. Any wind that was blowing either blew over the top of the tent or just barely clipped it. As I lay in my sleeping bag I heard the waves crashing on the shore though. And that wasn’t from barges passing but rather wind swells crashing on the sand. I was just thankful we didn’t wake to a blanket of white outside the tent.

Over the last week there was a small rash on my leg that has seemed to growing. I wasn’t entirely sure what it was, but I was thinking it was now to the point that I deemed it requiring medical attention. The city of Greenville, MS was a few days ahead so I was hoping I could find something there. 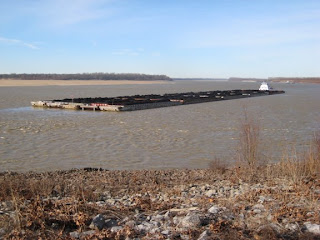 I checked the weather radio before setting off and wasn’t exactly thrilled to hear that there were 40 mile per hour wind gusts in the area atop a steady mid 20.

After getting in the water yesterday I stayed dry for an entire six minutes. Today I took a wave on to my spray skirt before even nudging the nose of my kayak off the beach. The day picked up exactly where it left off last night and I was none the bit too pleased.

We had the wind at our back so the day was akin to that paddling across Lake Pepin, but only with slightly smaller waves. For some reason I was more concerned about our safety now than I had been back on Lake Pepin.

We tried the best we could to use the banks to our advantage in hiding from the wind, but as there was such an extensive network of sandbars, there were stretches where it was nearly a mile of open sand before there were trees and any chance of a wind break.

Starting out the day soaked didn’t give me long before becoming cold. I was getting cold to the point of my finger and toes becoming numb. Given the conditions in which we are paddling we probably should have legitimate cold weather paddling gear, but as we really didn’t think we would have freezing temperatures for two months of this trip, we opted to go with lighter weight gear. The bigger problem is that my core gets wet as my spray skirt leaks rather significantly. Leave it to Confluence Water sports, the parent company that also made me a very mediocre quality kayak, to produce a spray skirt that is barely water resistant.

My map showed a series of casinos just off the river on the Mississippi side of the river. In the distance I noticed a large white building which was part of the cluster of casinos. I also noticed a boat ramp leading out of the water and to what could have been a nice warm bed and possibley some time at the craps table. I really wasn’t having any fun on the water and were I by myself I might have stopped, but as Kobie has his flight set to return to Singapore we had to push on despite how miserable it was.

We stopped on the side of the river out of the wind to come up with a game plan for the rest of the day. I also used the opportunity to change my clothes, including my wet gloves and socks. We didn’t come up with a definitive plan other than to paddle, which we executed until early afternoon.

As we fought the river we saw what could have been cabins on one of the banks. If they were to have a small heater they would have been absolutely perfect and more than we could have hoped for. As we grew closer though we noticed that the structures weren’t cabins, but rather picnic shelters. We could also make out a solid brick building which we guessed was the bathroom. We figured we would have a look as it wasn’t the safest of most fun days our on the river. 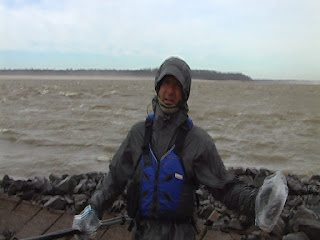 Kobie made a very deliberate turn and dashed back against the wind and current to the boat ramp. I saw him hit the ramp and quickly jump out of his kayak on to terra firma. I was slow in making the turn and ended up closer to the rocky shoreline then I would have cared to be. As I paddled towards the boat ramp, several waves broke over the side my kayak pinning me against the rocks. I called for Kobie who was already on his way with a throw rope. As he got nearer though I was able to gain some space between the rocky shore and myself. I battled to the boat ramp and Kobie gave my kayak a pull to get me several feet up and out of the way of any further breaking waves.

We wheeled up the boat ramp and over into the park. While there were no cabins, there was a large building with toilets, potable water and electricity. It was better than we had most nights on the river. Best of all the name of the place was Mhoon Landing Park. 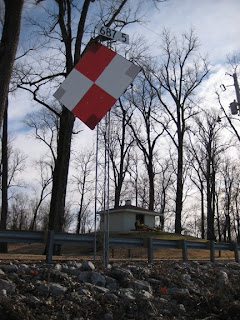 It wasn’t ten minutes before a truck from Mississippi Levee Maintenance came past. They stopped to ask what we were doing and in their faces I read that they didn’t really get it. They did however tell us that town was about five miles away if we were looking to go. They weren’t permitted to give us a ride or so we were told, which was fine with us as we had everything we needed, unless of course they could bring us a hot shower. It was one of those days that if it were to end with me having the opportunity to throw all of my clothes in a dryer and sleeping in a motel bed, I wouldn’t have complained. The fact that we had a toilet and electricity was enough for me to have little interest in a five mile walk.

A second truck pulled up from the same maintenance department and this time the occupants were true southerners. I only understood about half of what was said. They used phrases like; “we’re fixin’ to head down” and “that dun got’s to be seven miles”. They asked Kobie and me several times if we had been on the water today as they took that to be sheer insanity. It didn’t seem to interest them in the least that we started in Canada over three months ago.

In the truck rotation the first truck that visited had again pulled up reiterating that they couldn’t bring us into town, but were sending Reggie, who was permitted to take us. There wasn’t really anything we needed in town as we had done a full resupply in Memphis, but again if there were a motel we could dry some gear. 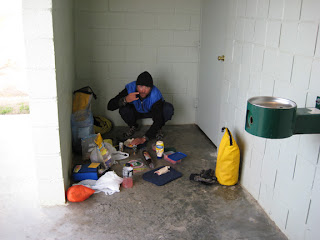 We ate lunch in the shelter of the bathroom . As we had some time at the park I watched a few barges round the bend and head downriver. Several of the barges struggled to make the turn in the wind, one coming to within several feet of the shoreline.

As we had nothing but time on our hands I called my friend Ken, who I was hoping would meet us at he end of the trip. He had a couple of bits of news, neither promising. The first was that he wouldn’t be able to pick us up with a trailer. The second was that it had snowed enough in Louisiana for his daughter to make a snowman. If I didn’t know any better I would think global warming was a scam.

Also in my free time I checked the weather radio. They issued a small craft warning, stating that “small boats would be especially prone to capsize”. As if I needed them to tell me. There was also mention of warmer weather in the offing, but the price of climbing mercury would be potential rain.

While there were several cars that came to the park around sunset, Reggie never made an appearance.
Posted by Kevin Knieling at 12:53 PM