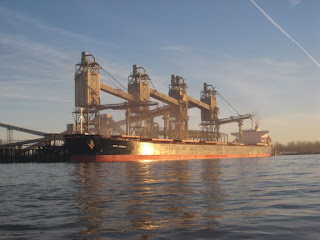 It was another sunny morning. There was ice on my kayak but that was of little consequence as there were no clouds to block the rising of the sun. There was also no wind and the day was supposed to warm up to 70 degrees. Oddly enough, it was the wettest that my tent has been in the morning. I couldn’t have gotten the rain fly of my tent wetter if I would have sprayed it down with a hose. It was drenched inside and out from condensation. Packing the tent was like folding dripping wet newspaper.

The area we were paddling had little free space on the river banks as there was one type of dock or another. Traffic on the river was also quite heavy. Our morning involved a game called “What’s that smell”? There were some pungent offerings including: coffee, dry dog food, soy sauce and wet mowed grass on a warm day, among others. The ships in the area were laden with all manner of dry goods. 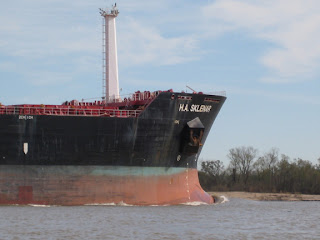 In watching the barges and ships being loaded and unloaded it is so inefficient and wasteful. The oceangoing ships are picking up or dropping off cargo and are loaded to/from the barges we have been seeing for the last month, which incidentally don’t seem quite so big anymore. Everything is craned into or out of the ships. While they may use several cranes at a time, there has to be a better way, not least of which when a crane isn’t right on the mark, some of the cargo is lost overboard. I don’t have the answer right now, but there has to be a better way.

By late morning the sky clouded over but it was still the two nicest back to back days we have had in over a month. The day seemed as if it was going so slowly. Miles were hard to come by, but we were making the distance. By the time we stopped for lunch we had covered the same near 30 miles as the day previous so it wasn’t quite as bad as it seemed. Lunch took us far longer as we had to dry all our gear. It was another yard sale on the side of the river. 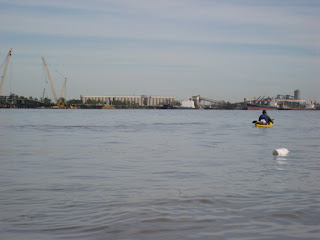 As we paddled along we saw ships from Hong Kong, Macau, Denmark, Bahamas, Italy, Singapore, China, Malta and Marshall Islands, but the big winner was again Panama. There are many reasons for a ship to register in one country or another, but needless to say, the ship needn’t necessarily have any true association with the country. It seems that Panama and Liberia are the easiest/lest expensive/least restrictive countries in which to register a ship.

One counterintuitive happening on the river is that the smaller tugs create more of a wake then the massive ocean goers. I would attribute it to the shape and speed of the boats. The large ships create low rolling wakes whereas the smaller boats give off a steeper wake. 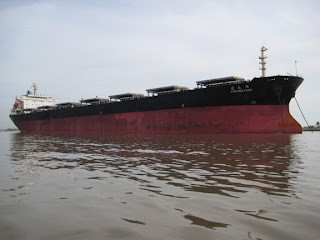 Just to add some visual clarification of what I am talking about when I say “oceangoing ship”. I am referring one similar to that in the picture on the right. If you notice a small yellow thing in the bottom right corner, that’s Kobie in his kayak. You may have to click on the photo to enlarge it.
We paddled through a heavy commercial area with barges all about as well as the tugs servicing them. It was like a bunch of worker ants working for the queen. The river was rife with activity. At one point we noticed a Giant oceangoing ship coming up behind us (that was actually the ships name, Giant 3) and a barge that was being parked ahead on our right. “No problem”, we thought we can cut in between the two. Within seconds another tug was coming head on trying to pass as well as yet another tug from behind coming to assist the barge that was being parked. There were a lot of moving parts and it was getting a bit hairy, but everything was still mostly under control. At least that was what I thought. Amongst the maelstrom of marine activity another massive ocean going ship, that I hadn’t even noticed, was passing the giant ship, forcing it further inside towards us. One of the ships unleashed its horn at what I could only assume was us. Not having any other options than getting run down by a several hundred thousand ton ship we dashed for a pocket of free space towards the shore between a group of barges that had been sitting. We made it out of the mix just fine, but hearing the deep horn blast of the ship was disconcerting to say the least.
Most of the boat workers we saw along the river gave us a blank stare as if they were looking at dinosaur swim down the river. I am guessing they don’t get many kayaks and I don’t blame the kayakers out there for not wanting to paddle on the lower Mississippi River. I can think of some nicer places to go out for a Sunday paddle. 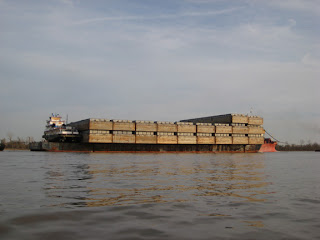 There was one oceangoing ship that looked like the repo man taking away a tug and all his barge containers. The whole lot was loaded up on the ship and being transported someplace or another.
Two pelicans were quite curious and flew awfully close to us. Normally birds fly away, but these two circled as if they were vultures hovering over carrion. I kept my paddle up to defend myself but it didn’t come to that. Other than pelicans, there are an incredible number of ducks on the river; in the thousands.
Towards the end of the day we had a couple of shouting conversations with barge workers. One of the tugs was one of those that we encountered in the earlier incident and he said quite simply, “You’re crazy”. One captain asked where we were coming from and when we answered summoned us over. We back paddled to give ourselves a few minutes to chat and the captain offered us a drink. As we were in waves kicked up from a barge, we passed on the offer but queried as to where we might be able to throw up a tent. He knew the area well and told us that just beyond his boat was the only area on the side of the river for quite some time that wasn’t revetment.

Kobie and I paddled a bit further and were able to tuck away in an area that was somewhat secluded though not at all quiet. We were just across the river from a ship dock where they were loading an oceangoing vessel with some type of grain. I was somewhat concerned as to what we could find so near to New Orleans, the murder capital of the United States, but it was as quaint as we were going to get on the side of the Mississippi River. We just hoped that we could punch through New Orleans and wind up safely on the south side of the suburbs tomorrow night.
Posted by Kevin Knieling at 12:51 PM