Where is the respect these days? It seems that people in motels have no consideration for other guests, thinking that they might be, I don’t know, sleeping. Kobie and I were up early; or at least earlier than we would normally be on the nights we stay in a motel. It seemed it would be hit or miss as to whether we were going to have thunder showers during the day, though there was some sun among the cloud covered sky. One thing was for certain, the wind was ripping hard out of the southeast. It may have had something to do with the record high temperatures that had been hit in the area yesterday, with further record breaking possibilities today. Finally, some unseasonably warm weather. 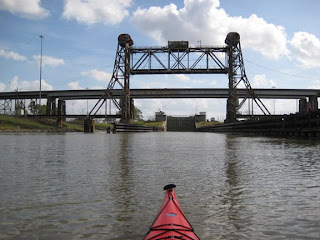 When we checked out of the motel, instead of walking all the way through town to get back in the river we walked all of a quarter mile and dumped our kayaks in the Port Allen/Morgan City Canal. The canal connects Morgan City, LA with the Mississippi River in Port Allen, LA with a 60 mile long canal right near where we got out. We had several miles to paddle to just get to the Mississippi River and before getting there we would have to go through a lock. There was no current in the canal so I felt sluggish paddling along, having been helped by the flow of the river for the last 2,000 miles. The canal was less than 200 feet wide so we stayed close to the shore to duck out of the wind.

We thought we were done with using locks on this trip, but we needed to rise 15 feet to the elevation of the Mississippi River. It was the first time on the trip we were going up in a lock as opposed to down. I had phoned the lock yesterday to preclude any problems and check that there were no restrictions for kayaks. I radioed the lock as we approached and they sent us right on through. The canal is a little used waterway save for recreational boaters and there really aren’t many out in the winter. As we were in the lock, the guy working it said to be prepared for heavy winds as soon as he opens the Mississippi Riverside lock door. He wasn’t kidding.

As we got out into the open Mississippi we tried to sneak behind the barges parked on the side of the river though it wasn’t always possible. There were occasions where we had to paddle in open water. My three biggest concerns, which should come as no surprise, were: the tugs, the waves and the wind.

The tugs in the area were small and basically shuffling around one barge at a time to position them with the larger barges. The little tugs give absolutely no breathing room when they pass, so we had to be especially mindful when they were near.

The second concern was the waves that were throwing us around. It was akin to the day we arrived at Mhoon Landing in the pitching waves, but this time the wind was in our face, allowing us to take the waves head on. It wasn’t as if the waves themselves were dangerous, but we had to keep a close eye on what was coming at us. It generally involved lots of climbing the steep face of a wave and then splashing down on the back side. As a tug was passing one of the crew waved just as I was going over a wave. I am a firm believer of always waving back and did so. I crashed down the other side of the wave making a tremendous splash, taking the brunt in my face. I did my best to act as if it were normal and paddled on. 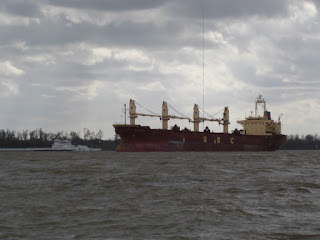 Concern number three is no surprise. I really enjoy a leisurely paddle, but when the wind is blowing there is nothing leisurely about it. I have to focus on what I am doing and keep my kayak pointed in the proper direction. The wind does all it can to push me in every direction I don’t want to go. With the increased and closer range traffic, I need to be especially diligent and at times paddle had to paddle like mad.

The day was warm, in the upper 70’s, though in the wind and being soaked it didn’t feel 70. It wasn’t uncomfortable though. While we didn’t even cover 20 miles with our late start and having to take the time in the lock, there was a nice easterly stretch of river that allowed us escape the wind. It was also one of those times where the river wound around so that we would have to paddle nine miles to get to a point exactly one mile away as the crow flies. I found it amusing how Kobie and I paddle close to one another and chat when the wind and water is calm, but when we round a bend and the wind howls we spread out as it is business time.

We had a floating lunch, more along the lines of what we thought it would be like when we envisioned the concept, coving some distance while we enjoyed our lunch sitting in the kayaks. At one point though I must have gotten stuck in an eddy so that when I turned around to look for Kobie, he was a quarter mile down river.

In checking the weather radio there was a report of heavy thunderstorms expected in the area just around sunset, so Kobie and I decided to give ourselves a little extra time to find a decent place to camp. The problem was that tree cover was quite thin and we were approaching another city.

We went ashore to find a decent campsite, though there was a deer hunting stand immediately near where we wanted to camp. We checked out the stand and it seemed as if it hadn’t been used in quite some time. We doubted that the owner would choose this night to begin using the stand again, so we settled in.

By 6 o’clock we were set up, done with dinner, had all our nightly chores complete and the rain had not yet come. We opted to sit outside and watch a movie on Kobie’s laptop. Much to our annoyance, mosquitos were back in the game. There were far fewer than up north, but they were no less annoying. By the time we went to sleep at nine, nary a drop of water had fallen from the sky.
Posted by Kevin Knieling at 11:29 AM