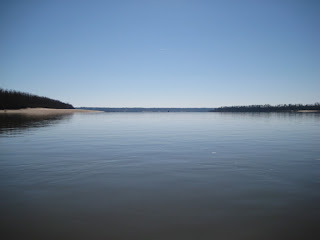 I had hoped that we would be out of temperatures in the teens, but last night dipped in that range again. It was however a gorgeous morning if a little cold. The heavy winds from yesterday died down to a light breeze. It was somewhat odd in the morning as the temperature tended to fluctuate. I had to keep adjusting to try and regulate my body temperature: gloves on, gloves off, hood down, hat off, hat on, hood up, open vent zips on jacket, open jacket sleeve cuffs, close jacket sleeve cuffs, close vent zips on jacket, unzip front of jacket, zip front of jacket.

I was spot on yesterday in saying that we covered the distance to the next bend in the river in just over an hour. It would have taken us the rest of the afternoon yesterday without question. On one check, we were drifting in the current at a speed greater than we were actually paddling yesterday.

We spent the better part of the morning dodging barges. It was somewhat frustrating having to constantly move out of the river channel where there is the strongest flow, but the barges have no other option and hey, they are much bigger. One particular barge passed us early in the morning, but then had to wait for a northbound barge. In places the river just isn’t wide enough for two barges to safely pass in the channel, forcing one to wait. Kobie and I however can simply pass outside of the channel. We passed the waiting barge only to have him leapfrog us just before we stopped for lunch. 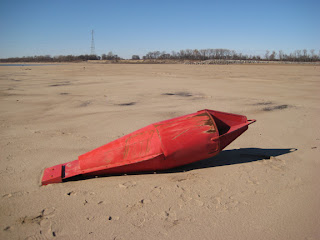 The buoys marking the river channel seem to be knocked loose quite regularly. At this point in the trip I have probably several hundred sitting around on the banks of the river. I am sure that some are still from the flood which tore them free, but others are half crushed as if they have been pummeled by a barge. I hardly find it surprising as steering the front of the barge that is over a 1,000 feet away from the captain’s location doesn’t always happen with pinpoint accuracy. The Coast Guard really has their work cut out for them in finding and collecting all the old buoys. I am fairly certain that the cost of each buoy is not so insignificant that they can leave them all over the place. The salvage value alone would probably be worth the effort. 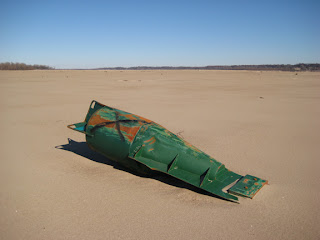 I had been thinking about the cost effectiveness of shipping dry goods via river barge. One river barge container holds about 1,500 tons where as it would take 10 railroad cars or 58 trucks to hold that same amount. According to the U.S. DOT Maritime Administration, on one gallon of fuel a barge can carry one ton of bulk goods 514 miles whereas for rail and truck those distances would be 202 and 59 miles respectively.

The cost of increasing the barge size by one container, on the margin, is in essence zero. The difference in cost between having a barge push one container versus say eight certainly isn’t linear. There is the added cost of fuel, which can’t be very significant for an additional barge container; more so traveling upriver though. At some point they would have to pay for a more experienced captain to operate the larger barge. There would also be the employee costs of roping on the extra barge were it not going to the same place as some of the other cargo and the time for the additional stop. I have a feeling though that with the tonnage that is moved along the river, most companies aren’t looking to move one barge and that the pricing model of moving goods reflects the economies of scale. From an accounting standpoint there is the depreciation on the tug which could be amortized over one more container, if the companies look at numbers in that fashion or simply stick to the time bounded approach. An average tug might cost about five million bucks, added to that another quarter million for each barge container, so pushing one more container for a few hundred miles viewed over the life of a tug priced in the millions would in my opinion be immaterial. 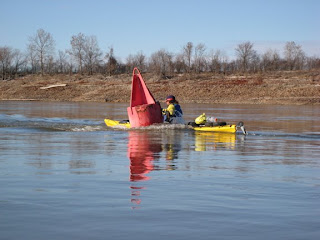 We were moving along quite well in the afternoon being helped by a healthy dose of river current. Kobie devised a new game on the water that he termed “Slapping the Nun”. It has nothing to do with religious hatred, but rather seeing how close we could paddle to the nun buoys on the river and slap them with our paddle. Slapping the nun is ultimate Catholic school boys revenge. Hey, we don’t have much on the river. It gets slow at times doing nothing but paddling all day. We do what we can to keep ourselves occupied after three months.

Late in the day we noticed a low flying plane. It was a smaller prop plane, but it was flying below the tree line along the river. At first I thought the aircraft was in trouble, but after a mile of buzzing the trees it gained altitude.

We buried the last 15 miles of the day in a hurry. We had planned on camping at Meeman-Shelby State Park which was right on the river so we actually had a goal. We had some difficulty finding the boat ramp that was allegedly there, but it was our simply not paddling far enough in the park.

As we went ashore on a large sandbar that extended out into the river we met a kid, Justin, who was out taking some photos. He mentioned that the camping area was about three miles inland but he could give us a ride to the main area to see what was up. Kobie and I couldn’t be bothered as we wanted to get an early start as we were hoping to meet my friend Jim tomorrow before noon in Memphis, TN.

We invited Justin to hang out while we set up our campfire. The three of us gathered around the warmth of the fire exchanging stories. As we were getting ready to wrap things up for the night a park ranger came along telling us that we weren’t permitted to be there. We were on a sandbar for Christmas sake. After a brief discussion and given that 1) it was for one night, 2) the magnitude of our trip and 3) where we where is under water for nine months of the year, the ranger said he didn’t see us.
Posted by Kevin Knieling at 11:12 AM