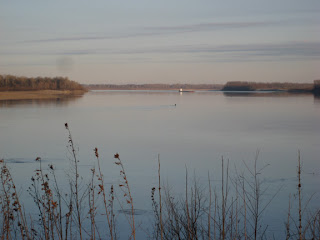 I was expecting to be woken in the middle of the night by Reggie, but he never did make an appearance. We slept later than planned and it was a shame too as the morning was one of the best in a long time. While there were freezing temperatures overnight, it hardly seemed it as the glorious rays of the sun were beating down upon us. A small bit of sun makes a big difference; quite possibly mentally more than anything.

We had a bit of a walk over to the boat ramp as we had to stick to the road. The ramp itself was barely 100 yards away from the campground, but that would be across a rocky ravine. In 15 minutes though Kobie and I were standing at the edge of what looked to be a completely foreign river. It was another one of those times where it was the same river in name only. The water could not be more changed from the day previous; calm as glass with only a periodic disturbance by a small patch of roiling water. If every day for the rest of the trip was exactly as this, I would be overjoyed.

By late morning I found myself paddling without gloves or a hat and wearing only a long sleeve shirt. It wasn’t paddling sans shirt as I had on some warmer days, but given the weather we have had the past several weeks I was thrilled with the day. It has been so frustrating that we have been having such rough luck with the weather. We can’t seem to get any momentum going as it seems that every couple of days we get held up. While I enjoy paddling, it is hard to keep a rosy outlook when it is overcast, 30 degrees with winds in our face to match the temperature in speed.

I have a little brain teaser for you geography buffs out there. As we paddled south with the state of Mississippi on both sides of the Mississippi River, Arkansas was to the east of us. Figure out how that is the case. 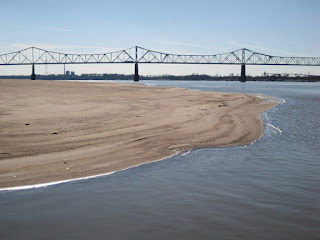 Outside of the day we ended our paddle early due to the high winds, it was the most pleasant lunch we had on the river in weeks. I almost forgot how to eat lunch without hopping around trying to stay warm. As there is generally a significant amount of condensation on our sleeping bags in the mornings, we have taken to airing them out at lunch time. There is nothing worse than having to climb into a damp, clammy sleeping bag.

Kobie and I spent a better part of the afternoon talking about our lives; where we thought they would head going forward and some of the decisions we made to get us to the point where we were on the river today. The more I talk about my days on Wall Street, the more I want to return. Perhaps my time away has distorted my memories of work, but if I do return despite having a four year gap in my resume I don’t think that anyone can question my persistence or motivation.

As we were paddling along there were spider webs all over the river. It seems that water spiders live on the river and send up long spindly webs to float in the breeze. I can’t imagine what the catch on the water, but today is was two kayakers. If you had seen us you might have thought we crawled through an old attic.

Late in the day we paddled through the narrowest section of the river in quite some time. The Mississippi River was barely a couple hundred feet wide and we had to share it with a northbound barge. While it was a bit of a squeeze getting through without taking on waves from the barge wake, if it meant that the water funneled through as quickly as it was, I would be willing to contend with the barges on a close and personal basis. We were moving along at a speed that was nearing double digits in miles per hour. 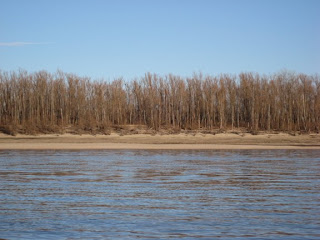 The characteristics of a typical campsite we have been using since Winnipeg has changed significantly. Things have become rather sandy, but any tree cover we find is welcome. This picture to the right is pretty much the type of terrain that we look for come the end of the day.

At just the right time of evening we happened across a campsite with a view. It was in the nook of a bend in the river just past a revetment. The site was up a sandy bank and allowed us to watch the barges as the passed. The campsite was rife with firewood and situated as a perfect vantage point to watch the sun set in one direction while seeing the moon rise in the other.
Posted by Kevin Knieling at 1:30 PM