Out For A Walk

It rained on and off overnight but was the warmest night in several months. My sleeping bag didn’t get zipped the entire night. Kobie and I arose early in an effort to make it to the town of Greenville, MS at a reasonable hour. We were excited about the day as it would potentially end with a hot shower, but as we were packing up a brisk blustery wind kicked up. Also, as we got done packing it wasn’t quite light enough to yet to get on the river. As our luck would have it, it began to rain. As we waited for the sun to do its work Kobie and I hunkered down under his little tarp to try and stay dry. We squatted on the sand with our back to the wind and waited.

As the morning became light visibility was still only about a mile. It left me particularly vigilant about checking for barges. Fortunately, before long the fog lifted to some degree allowing us to scan the river more easily.

We kept out heads down and kept paddling through the morning. We were 16 miles deep before we stopped for a break. I also realized that if I am going to get wet, I prefer paddling in a steady drizzle than having waves dumped over me. While most nights we don’t have the luxury, I was getting by thinking about the fact that by days end I would potentially be sleeping in a bed under a roof with four walls.

One of the problems of having so much time to think about things going on in the trip is that when any small event occurs I begin to recalculate my idea of timing in the trip. On a day like today when a heavy wind would blow for a few minutes I would rethink my initial conclusion that we would make it to the town of Greenville. When the wind stopped and the current helped us along I would think that not only would we get there, but we would arrive early. Micromanaging a trip such as this isn’t very productive as there are so many external variables that I can’t possibly calculate with any degree of accuracy any of the outcomes. Just when I think we have something in the bag a tornado could come along and change things significantly. It is difficult at times as I have so much free time to think about everything yet nothing as I am on the river. 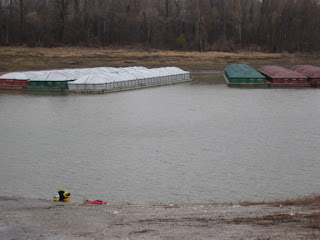 Kobie and I thought that we would arrive in Greenville, MS by about 3 o’clock. We arrived by 1:30. At least to the area we needed to get off the river to walk to town. We needed to paddle on a small outlet from the river to get as close as we could to the city of Greenville. The area we were in was a commercial maintenance area for tugs as well as a loading area for barges.

We got the kayaks up out of the water and on the kayak carts for the walk to town. As we were in an industrial area every vehicle that passed us seemed to be a pick up truck or was towing a trailer. There were several scrap metal dealers in the area and I witnessed may loaded up vehicles making a drop off and come back past with so much free space.

One guy stopped to ask what was up and then take our photo. He offered to put the kayaks in the back of his pickup truck, but as he had a tool chest that shortened the bed of the truck is wasn’t feasible to get even half of the kayaks in. I looked at every vehicle that passed and said yes or no, meaning yes our kayaks would fit on the vehicle or not. If ever someone were to take pity on us ever again I was hoping today would be the day. 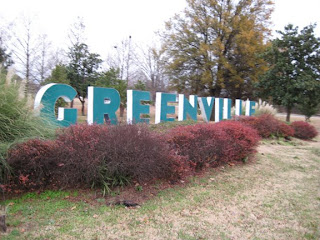 After nearly an hour we made it to the main road. We carried on and made a stop at the Mississippi Welcome Center. While there were free drinks at the welcome center, they didn’t have much good news as to how far we would have to walk to find a motel. We continued on.

As we walked past a house with a “No Trespassing” sign hung above the front door we kind of figured that we weren’t in the nicest area of town. 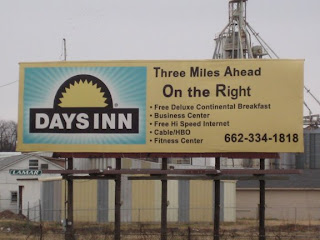 It was somewhat disheartening when I saw a sign for the Days Inn indicating that it was still another three miles. At least we had a worst case scenario. Little did I know we would have to use it. We had several people stop to ask what we were doing or even if they could help, but the folks that stopped didn’t have a vehicle equipped to carry a couple of kayaks. We received many a strange look. I figured I should call the newspaper so that they could do a story explaining why two guys walked down the street with kayaks.

One of the folks that stopped was Dennis, who was a canoeist and could understand the jam we were in. He mentioned that he would try to give us a ride back down to the river when we were ready to go. We would be very grateful.

As we pulled up to a traffic light in a lane of traffic, a police officer came from the cross road and pulled in sideways in front of us. In the manner of the span of the red light, we explained what we were doing and why we were blocking a lane of traffic during rush hour. The officer held some traffic back for us as we made our way across the intersection and on to the shoulder of the road.

We arrived at a couple of motels that advertised “Day Rates”, so as tired as we were we kept walking. We arrived in front of a motel that was until recently a Best Western. I didn’t have the energy to walk the few hundred feet to the Days Inn. We walked 7.6 miles since getting off the river pulling our kayaks the entire way and I was done. We knew we covered some distance on the road when we passed two separate McDonalds. 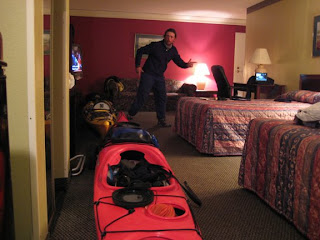 The motel was formerly a Best Western as it no longer seemed to meet the quality requirements of the chain. We had to switch rooms as the first didn’t have a working TV, but he new room we were given was twice the size so we could more easily get our kayaks inside. While the chambermaids also had a somewhat dubious definition as to what the word “clean” means, it was still far superior to the Relax Inn in New Madrid. It even beats the worst Best Western I stayed at which was in Jaipur, India. As I was waiting to get on the elevator, the doors opened and as if it thought it belonged there, a rat got off the elevator. As I was in India, all I could do was laugh. I was so tired that anything would have been fine for the night.
Posted by Kevin Knieling at 6:01 PM