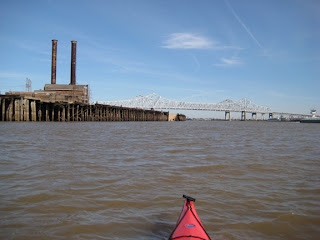 I had the worst nights sleep as the tugs were shuffling barges in our vicinity non-stop all the night through. The first time I woke and looked at my watch it was barely midnight. I knew then it was going to be a rough one. Kobie and I had planned an early getaway and were on the water paddling at 6:45 with just barely enough light to see. As there was a hint of fog we opted to paddle behind some barges parked on the side of the river. We were literally chased down by a tug and told by the captain that it wasn’t safe to be behind the barges as they can be pushed into the shore or pulled away for that matter and the shear cables that lash the tugs to the shore could snap taut with tremendous force. We thanked the captain and paddled in amongst the massive ships in the fog at dawn.

It would just be too much to ask to have a third day in a row without wind. We were quite pleased with the temperature (mid 60’s) and the level of sun (partly cloudy to mostly sunny), but our nemesis the wind made himself known.

As we paddled in the main part of the river we were right back into the mix. It seems that many of the boat workers begin at 7 AM as many shuttle boats were buzzing about bringing people to their floating place of work. 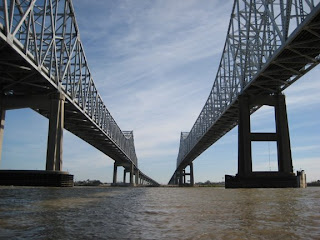 The highlight of the morning was passing by New Orleans International Airport as watching the planes take off and land gave us something to do. And it wasn’t long into the day that we approached New Orleans proper.

Just before entering the city there was a several mile section of cargo docks. While only a small few were in use, I was well impressed by one particular dock that was unloading a container ship. The ship had to have 500 or more containers on it. You know, the ones that are about the size of an 18 wheeler. The guy operating the crane booming the containers off the dock had his work down as it barely took him any time at all to get the crane on a container, hoist it up and then down on the truck waiting on the dock. There were several dozen truck lined up like a taxi rank at an airport waiting to receive their passengers. When I came through New Orleans on my bike I had several thoughts about containerized cargo transport so I won’t go into it again, but the link is found here.

Also just before the city proper was a large warehouse where they store all the new Mardi Gras floats. In looking up through the large windows we got a sneak peek at what is in store for this years parade. 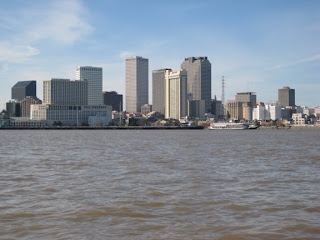 As we passed though New Orleans proper we had to dodge two ferries, one of which I took across the river earlier in the year on my bike ride. Saint Louis Cathedral, an icon of the French Quarter and the oldest Catholic cathedral in continuous use in the United States was in view as we paddled past and south of New Orleans.

I guess the guy in Kiethsburg was wrong that we couldn’t paddle past New Orleans.

South of New Orleans the river belongs to the big ships, as barges are far and few in between. I get a kick out of passing the anchored ships and looking at their place of registry on the back of the vessel. The new countries today were the UK, Philippines, Korea and UAE though the old favorite Liberia made a good showing. I also like some of the names that the ships are given: Mega Donor, Great Scenery and Asphalt Victory, among others. Some of the ships have a registration in Asia and I can be certain that something is lost in the English translation. 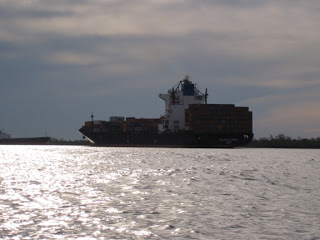 There were a couple of times as we paddled along when a ship snuck up on us. How does a ship six stories tall sneak up on us you might wonder? Surprisingly, the ships are much quieter than the barges and faster as well, able to travel over 15 knots. In the past we only had to look behind us every ten or so minutes. We learned the hard way that now sometimes even every five minutes isn’t enough.

By the end of the day we paddling 11 hours 34 minutes. Some of you may have done the math and no, there aren’t that many hours of daylight in a day. Not at this latitude anyway. Late in the afternoon we found a potential place to camp but we just weren’t ready to be done paddling for the day. As there are roads running immediately down both sides of the river we had to reach an area where the road turned ever so slightly inland allowing us a place to tuck our tents. As it was New Years Eve as well, we wanted to be better hidden than we would normally want to be on a Wednesday night.

We paddled on into dusk which I enjoyed. The sun was setting and there was enough light to enjoy the calm water in that the wind had dropped. Normally we are conservative in our decision making and wouldn’t paddle past dark if it could at all be prevented, not least of which that our boats don’t have any lights and we would be operating them illegally. The river was flat calm and my map indicated there was absolutely nothing on the left hand side of the river other than a stone revetment running along for the next 10 miles. Not having to dodge refineries, cargo docks or anchorage areas made following the bank quite easy. Another reason for our decision was that there was a ConocoPhillips plant on the opposite side of the river for several miles and there were enough lights on the plant to provide sufficient illumination to read a newspaper had I so chosen. The plant looked like a futuristic city, something from the film Total Recall perhaps. To add to the experience there were also two large stacks over a hundred feet high that were spitting flame out the top.

As the night wore on we even had several fireworks shows. One was in New Orleans directly behind us, which didn’t make viewing easy but we saw some fireworks nonetheless. In an odd way I like fireworks in the distance that I can see but can’t hear. While hiking the Appalachian Trail on July 4th I had the same experience.

The evening on the river did provide at least one thing to get my heart racing; paddling through a school of fish. Kobie and I had been talking alligators and shortly thereafter I must have gone through the middle of a school of fish, actually striking a few with my paddle. The water erupted in activity leading to some initial confusion on my part. It took me a few second to figure out exactly what was happening.

We were able to get off the river and camp a couple hundred yards away from the road, exactly as we had hoped in looking at the map. We were tucked in a swampy area with some road noise but we were hidden. If I were an alligator it looked exactly like the kind of place I would want to hang out. A run in with one of those is not exactly how I want 2008 to end.
Posted by Kevin Knieling at 9:29 AM