This morning was the latest we slept, despite being next to a major highway. I could feel the walls shake as large trucks passed by. When I looked out the porthole window in the bathroom I saw the flags of the American Legion next door flapping aggressively on a dark gray background. While we reeeeaaaaly didn’t want to spend more time in the “No Tell Motel” longer than we had to, especially when there was zero in the way of services, it was going to be a day off.

New Madrid, named for Madrid, Spain, was the first town in Missouri was founded in 1789. The site of the town was that of a trading settlement. The town was set up during the time of Spanish Rule, before the French and the Louisiana Purchase.

New Madrid was an important stronghold for the Confederates in the Civil War. While the city itself wasn’t overly fortified, it was protected from the Union Army by the fortifications several miles north of the city on an island in the middle of the Mississippi River, Island # 10. As the Union army couldn’t penetrate past the battery and steam ship gun boats that were stationed near Island # 10, the Union Army had 600 engineers dig a canal to cut off an oxbow of the river and Island # 10, This allowed the Union army to advance unimpeded into the city of New Madrid. The Island can no longer be seen as time and erosion haven taken their toll upon it. As the Army Corp of Engineers continue to dredge the area, allowing barges to pass in the canal, Island # 10 will remain part of history. If you would like to read all about it, you can do so in the New York Times dated March 18, 1862.

Stepping back further in time still, there was a major earthquake in the New Madrid area in December 1810. It had been dubbed, not quite so eloquently, “The Night the Earth Went Crazy”. Sink holes opened up and the Mississippi River was rumored to have a backward flow. The earthquake was estimated at 8.8 on the Richter scale.

The Richter scale was developed by Charles Richter in 1935 as a numeric quantification of the amount of seismic energy released by an earthquake. The scale is logarithmic, in this case meaning that for each escalation on the scale it is ten times more powerful than the one previous. A “one” on the scale is equivalent to six ounces of TNT. A “six” is equivalent to 6270 tons of TNT and a 7.5 is 1,000,000 tons of TNT or the same as 50 Atomic Bombs. I’m just glad I wasn’t there for the 1810 quake as the energy release was in the gigaton range.

As far as recent history is concerned, the most notable event in New Madrid was the earthquake, or rather the lack of an earthquake that was predicted in 1990. Iben Browing, who was able to gather a significant following, predicted a major early December 1990 earthquake on the New Madrid fault with a 50% probability. One report was that there were no fewer than 45 broadcast vehicles in New Madrid about the time the earthquake was forecast. The earthquake never happened.

One last claim to fame of New Madrid is that the inventor of the sewing machine was a resident. While the inventor, Elias Howe, went to London in an attempt to find his fortune, other inventors improved upon his design and had far more success. Fortunately for Howe after significant legal battles, the people that stole his idea were determined to have infringed upon his patent and forced to compensate him. Howe earned over two million dollars in his lifetime from his patent. That wasn’t bad money of the late 1800’s.

On my walk through town I stopped at Rogers Grocery, an old time grocery store where there wasn’t all that much of a selection, but what they did have there was lots of it; such as cans of corn. It was almost like Communist Russia. They didn’t have much, but what they did have, they had loads of. The old gentleman behind the counter, it could have been Roger, I didn’t ask, made me a sandwich. All in for a sandwich and soda, he hit me up for $2.83. Truly a bargain. 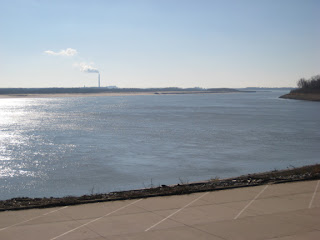 As I walked along Main Street I heard the efforts of a tug engine pushing a barge upriver. I walked over to the river to have a look. The river was in better shape than yesterday and I was hoping that after another night it would look better still.

By the time I was just about ready to head back to he motel I stopped by the Post Office to collect Kobie’s new kayak cart wheels. I was in luck as they were there. As the new wheels were slightly smaller than what we had to replace or original wheels, Kobie was willing to trade me so that the smaller tires would fit better behind my kayak seat. As he carries his tires on the deck of his kayak, he didn’t care.

In staying at the motel we avoided a heavy rain. Thunder shook the walls of the motel. While we would have survived, it was far nicer to have a solid roof over our heads, even in its ramshackle state.
Posted by Kevin Knieling at 10:38 PM