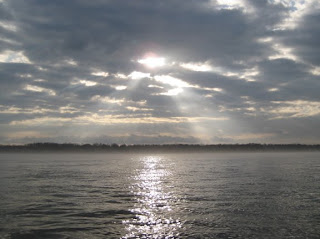 It was another warm night and this morning I woke up with my tent bone dry. When setting out in the morning Kobie and I noticed that the water level had risen several feet as the landing upon which we came ashore last night was much smaller than it had been.

For the third day in a row we had some fog to contend with, though it was fairly light and not as much of a nuisance as it has been. A south wind picked up and blew a majority of the fog off the river.

To start the day Kobie thought he would play a game of “slap the nun”, as we know referrers to paddling close to and slapping a nun buoy with the paddle. In this case though the slap turned into a full on body check. The current pulled Kobie in and he put a block on this thing that would make an NFL lineman proud. Kobie stayed upright, though he was soaked from his meeting with the buoy. All I could do was laugh, that is, of course, after I knew Kobie was OK. 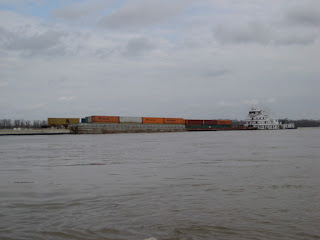 There was one barge after another coming up river, keeping us from using the main channel. The barges were all relatively small, pushing only a half dozen barge containers, but they still kept us from where we wanted to paddle. There was however one barge that was shoving along standardized freight containers. Whereas a truck would carry one, each barge container was loaded with 24 of them. This barge had about a half dozen filled with barge containers, not to mention that it was carrying barges with other cargo as well. The barge appeared somewhat ungainly as the barge containers aren’t meant to carry shipping containers but rather loose bulk cargo, such as coal or grain.

With the rise in the river level the majority of the wing dams were underwater, with perhaps a few bits of rock poking above the surface of the water on some. It is still no secret that they are there as when the water passes over them it becomes turbulent. Even if there was no change in the water our speed slows down significantly when approaching the wing dams as they block the flow of the river. They way I looked at it was: with the wing dams fully covered, they were pushing the maximum amount of water into the channel and helping to move us along. 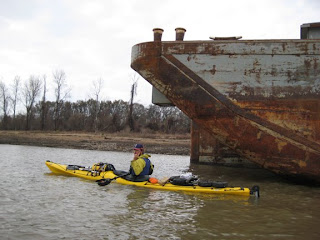 The wind was out of the south and if I was disappointed the other day when we could barely muster 2.5 miles per hour, I was absolutely frustrated today when on one section of river we barely moved in a forward direction at 1.5. When people ask how I cope on these long trips I always say something like: “It sounds long, but with each paddle stroke I will be a little closer to my goal”. Unfortunately for me, today with each paddle stroke I was only ever so slightly closer to my goal and were I to stop paddling I would be further from it. I am not saying it is easy I am just saying it is true.

The wind for tomorrow is forecast to be in the diametric opposite direction as today, so will be at our backs in the range of 25 miles per hour with higher gusts. While you might think that it would really help push us along, it doesn’t. What ends up happening is that it creates a chop on the water that Kobie described best as “riding a drunken horse”. The waves pitch in every direction and it becomes unsafe. With the wind in our face, so too are the waves, but we can see what we are up against and our kayaks take waves much better head on.

We paused for lunch on a beach out of the wind and managed to keep the sand out of our sandwiches. As we ate we were visited by a new nuisance, the fly. We were swarmed as we tried to sit and enjoy our lunch. I can’t remember the last time I was able to sit and enjoy lunch on the river. If it isn’t flies, it’s the wind, if it isn’t the wind it’s the cold, if it isn’t the cold it’s the rain. I will again ask to catch a break. I guess I shouldn’t complain, the temperature hovered just around 70 and the sun did make a halfhearted attempt a shining through the clouds. There was a periodic hint of sun, though it didn’t require sunglasses or even a brimmed hat, but I was focusing on the positive. I saved a bunch of money on sunscreen this last month. 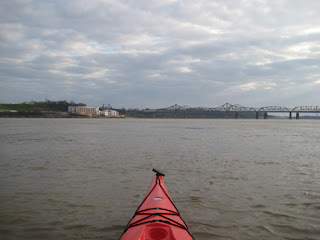 We didn’t have the same luck as yesterday when the wind stopped just after lunch. Having a battle royale with the wind held us up for part of the day and we had to decide what to do as we approached the city of Vicksburg, MS. Either we had to camp before it, stay in the city, or camp after it. We opted to slog it out as just as we approached the city the river turned to face due south and into the head of the wind.

There is very little sprawl to the city of Vicksburg, but the several casinos right on the river were doing a brisk business for late Saturday afternoon. The wind was forecast to pick up and blow from the north, so we were looking for someplace sheltered to camp. After turning down several options, we settled on a flat section of an island that was rather low lying. As the river level was again supposed to be on the rise, it may not have been the best choice, but it was already after five and the sun was below the horizon. 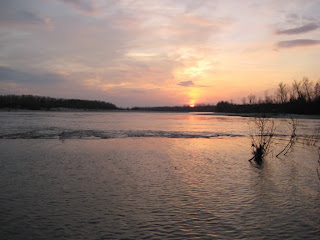 We set up camp in some soft mud, indicating that the river was at that level not too long ago, but we were out of options. Kobie and I agreed that we would each get up once in the middle of the night and check the river level, he at one, me at four. We braced for some rain overnight, a high of 45 tomorrow and 30 mile per hour winds as we fell asleep to the sound of water rushing over the top of a wing dam.
Posted by Kevin Knieling at 6:42 PM