In and Around Natchez, MS 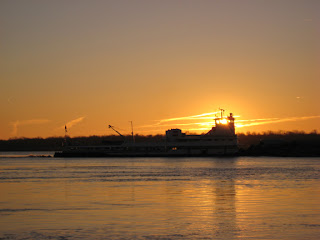 Somewhere in the neighborhood of a zillion barges passed our campsite overnight and there was a deer that repeatedly invaded our camp and would grunt before it ran off in a huff. The temperature was only in the mid 20’s overnight, so it could have been worse, but I was hoping that it would be the final cold night of the trip. I have said that before.

In trying to get back in the water the landing we got out of the night prior was no longer there, but had sunk below the surface of the river. I managed to sit my kayak on the bank parallel to the river and then slide down into the water. If that went wrong it would have gone very wrong.

We had a strong current running with us, wind was light out of the northwest and barge traffic was heavy. The temperature was tolerable, kicking around in the 30’s all morning. I put it on autopilot and paddled along.

Just before the town of Natchez, MS, I noticed a nodding donkey, a type of small oil well. The up and down motion of the head of the well powers a submersible pump in a borehole; it is pretty much the same principle of a bicycle pump pushing air in a tire. The area is rich in oil and the yellow pages of the town reaffirms the case as the phone book has over 25 listings for oil related services, from exploration, to pumping services to maintenance.

When paddling into Natchez, MS I noticed many homes perched on the cliffs above the river and oil production facilities down below. Some of the homes appeared magnificent on the cliff. It reminded me somewhat of the La Jolla cliffs just north of San Diego, CA. Were the La Jolla cliffs a bit smaller, had houses on them and were on a river and not the ocean it would have been more similar; a bit of a stretch perhaps, but that is what came to mind.

As we pulled onto the boat ramp in Natchez the sun that had been out all morning vanished behind the clouds and refused to show itself for the remainder of the day. 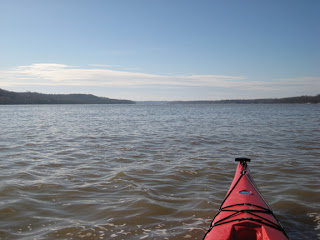 I was hoping to stop in and see what the town of Natchez was all about, but it would be limited to going to the nearest bar at the top of the boat ramp and filling up on water. We had sufficient food to make it to Baton Rouge, LA and probably enough water, but Kobie was low, so we wanted to turn the probably to a definitely.

The town of Natchez, MS is one of Mississippi’s oldest, having been founded in 1716, more than 100 years before it present capital of Jackson. Even prior to European settlement the area was home to the Natchez Indians.

Natchez is also the southern terminus of the “Natchez Trace”, an overland route to Nashville Tennessee. Boatmen from as far as Ohio and Pennsylvania, mostly in the early 1800’s would float their goods down the river systems to Natchez or New Orleans to sell their wares (including their boats) and then walk the back to their home along the Natchez Trace. Hmm, sounds like a potential trip for Kevin Knieling, Adventure Traveler.

I would have to come back should I want to see first hand all that I learned about Natchez. Across Natchez was the town of Vidalia, though there is no relation to the onion of the same name. It is Vidalia, Georgia from which the onions derive their name. There is actually a specific growing region for Vidalia onions with defined boundaries, much like the wine producing regions in France.

Kobie and I had an abbreviated lunch on the boat ramp in the cold wind. We made quick work of our food and I climbed back into my kayak nearly shivering. I would remain cold for the two hours following lunch.

Getting back out on the water was a mission as I had to fight the increasing number of waves crashing on the boat ramp. I made it off the ramp and turned to head downriver, but ended up getting stuck on a section of the boat ramp that had broken off and had submerged itself underwater. I wasn’t sure exactly what had happened, but my skeg would no longer retract in its entirety.

It seemed that in the afternoon we came across boat traffic in bunches. I hadn’t thought about it, but much like traffic on the road, it too must back up. It is probably akin to passing a truck on a mountain road. You have to wait until the road is wide enough and there is no traffic coming from the other direction. It is just on a much larger scale.

Kobie and I pushed along late into the day. We thought that if we had a solid day, it would be possible to get to Baton Rouge in just two more days paddling. When we finished for the day we left ourselves 100 miles from Baton Rouge.

We had a very sheltered campsite off the beach, over a small hill and in a gully. There was plenty of firewood and it got us out of sight of the river. The weather was to remain cold for tomorrow with the typical strong headwind.
Posted by Kevin Knieling at 7:51 PM